Fountains, pools and ponds bring life to your landscape

There are a hundred reasons not to incorporate a water feature into your landscape. It’s a huge project, you worry. I don’t have space for that, you might say. Who has time to keep it up? you wonder.

“When people come to me looking for a fountain or another water feature, I make sure they realize that there can be a lot of maintenance involved. You need one guy to maintain your pool, and someone else to maintain the fountain, because there isn’t much overlap on those skills. It can get expensive,” says Stephen Block, a garden design expert who imports garden antiques and reproductions.

This might not sound like the beginning of a story about how wonderful water features are—a story full of design ideas to consider—but it is. By acknowledging that they don’t fit neatly within the structure of easy, maintenance-free gardening that’s taken hold over the past decade, you can be realistic about what having a water feature actually means in terms of space, time and expense. Only then can you marvel at the beauty such an addition can add to your home landscape. 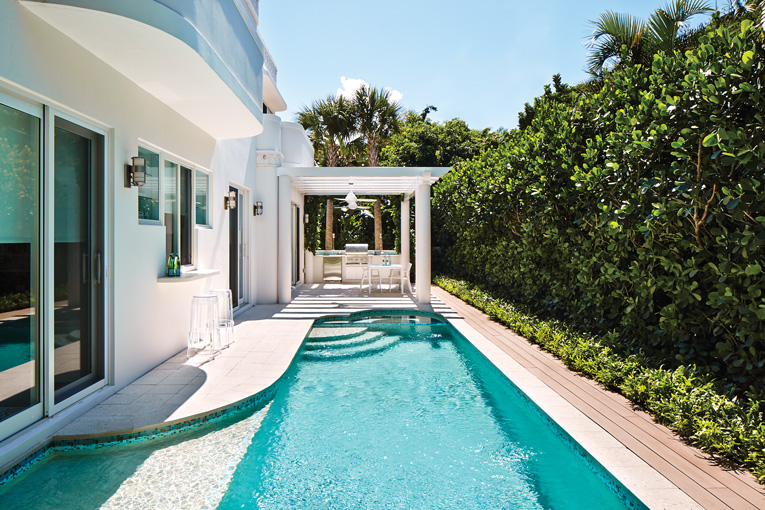 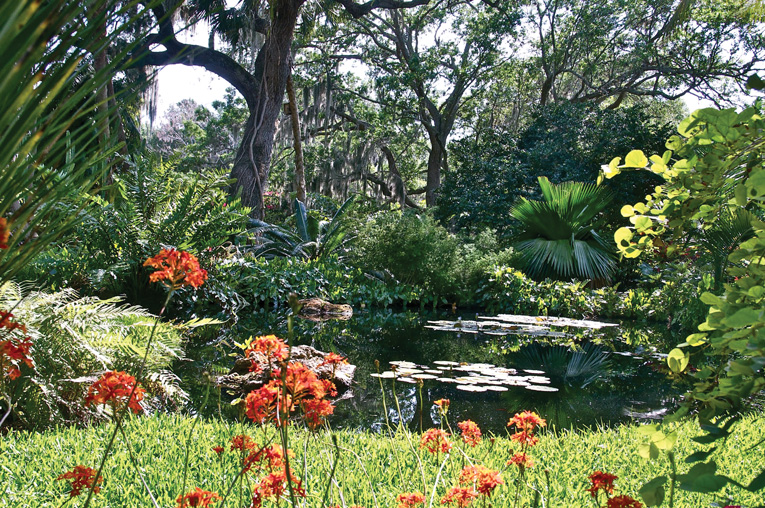 First, decide on the style of fountain you want and where  you might like to place it.

A fountain’s position in the garden relates to the surrounding landscape. Block says to ask yourself: From where will it be viewed? What scale do I need to complement the other existing elements, like plants, trees and furniture? Will I be able to hear the trickle and splash of the fountain? “Once you’ve decided where your fountain will be and what kind of fountain you want, get help installing it properly,” he says. Although there are some DIY exceptions, “most of the time you’ll benefit from having a professional involved.” 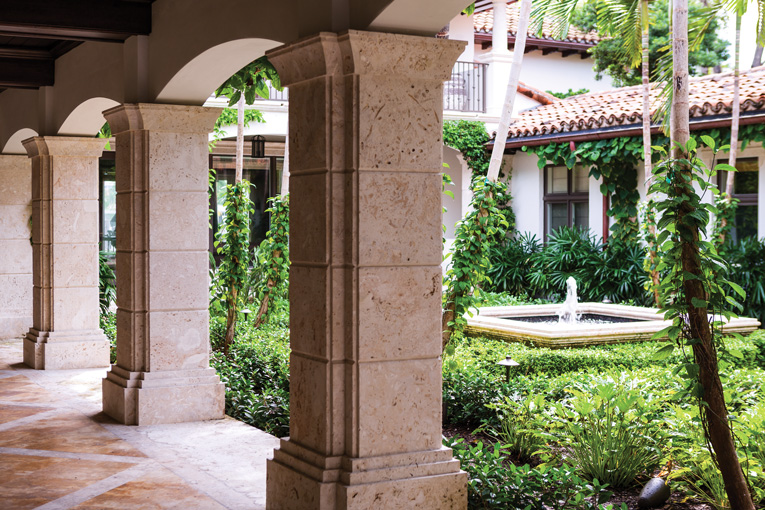 Jason Nuñez, a designer with Fernando Wong Outdoor Living Design in Miami, worked on a garden where the fountain was placed in the center of a courtyard.

“You have to walk around the courtyard to get to the main entry, which is unusual. But that gives you a view of the fountain from many positions, and you can appreciate it more,” says
Nuñez. “Getting to the front door is about having an experience—not getting to the door as quickly as possible.”

To play up the fountain’s visual characteristics, cotoneaster shrubs were trained as a formal hedge to tightly hug the Florida keystone edge of the fountain. As you move further away from the fountain, plantings are a bit wilder and less formal. Philodendron selloum and lady palms give the outer reaches of the courtyard a tropical feeling, and vines trained on vertical elements like walls and taller trees are the only flowering plants in the courtyard.

Every aspect of the garden intentionally directs the eye toward the fountain, so that it literally takes center stage.

Music to Your Ears
It matters how a fountain looks and functions as a part of your landscape design. But fountains also provide something for your outdoor space that few other garden elements do: sound. “You want the sound of the fountain to be appealing—to tickle your ear,” says Block.

The spout should be an ample size. Narrow spouts create more pressure and make the water sound forced. When the water sounds like it’s falling out of the spout rather than being forced out, you’ve found the sweet spot. 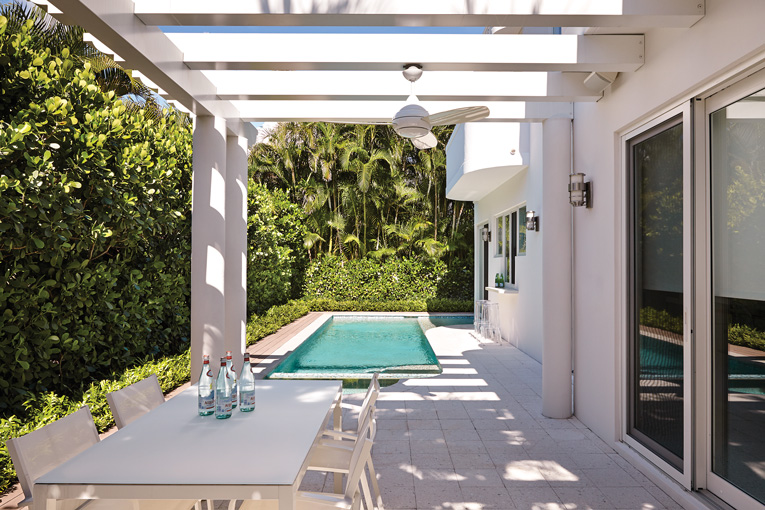 You may not believe you have room for a swimming pool, but the truth is you probably do.

There are 1.25 million residential pools in the state of Florida alone (according to the Florida Swimming Pool Association Economic Impact Study), and many of them are located on properties that were sited to accommodate pools before the houses were built. If you aren’t working with a blank canvas, and your home’s position on the property seems to exclude space for a pool, you have options.

Jason Nuñez recently completed a pool project for a client whose home took up almost half of the grounds. Because the home was centered on the property, with inadequate space for a pool behind the house, Nuñez settled on a lap pool along the southwest edge of the property—outside an interior corridor that includes a home gym, kitchen and dining room.

The form and function of the outdoor space echoes what is  happening inside behind the wall—the lap pool is for exercise and is located just outside the home gym. A pass-through window from the kitchen to the pool deck makes it easy to serve cocktails and snacks, and a small ledge with seating encourages people to sit and socialize. A casual dining area and built-in outdoor grill near the dining room door clearly establishes the pool deck as a place to gather and implies that the pool is for more than working on your butterfly stroke.

This isn’t just any lap pool. At 10 x 30 feet and 5 feet deep, it’s large enough for kids—and adults—to play in, and it has several design features that make it as inviting as a traditional swimming pool.

First, there’s a heated spa at one end, and an underwater seating ledge that can accommodate up to four people at the other. Then there are the details. Pebble Tec tile lines the pool’s interior, giving it an eye-catching shimmering look. “Most people touch the side of the pool when they are in it,” says Nuñez, “so we wanted something with an interesting texture.”

The pool deck is tiled with Shells Reef stone, which feels smooth underfoot and stays cool even with the sun blazing all day. Plus, it’s slip resistant and beautiful—pieces of shell are incorporated into the tile. 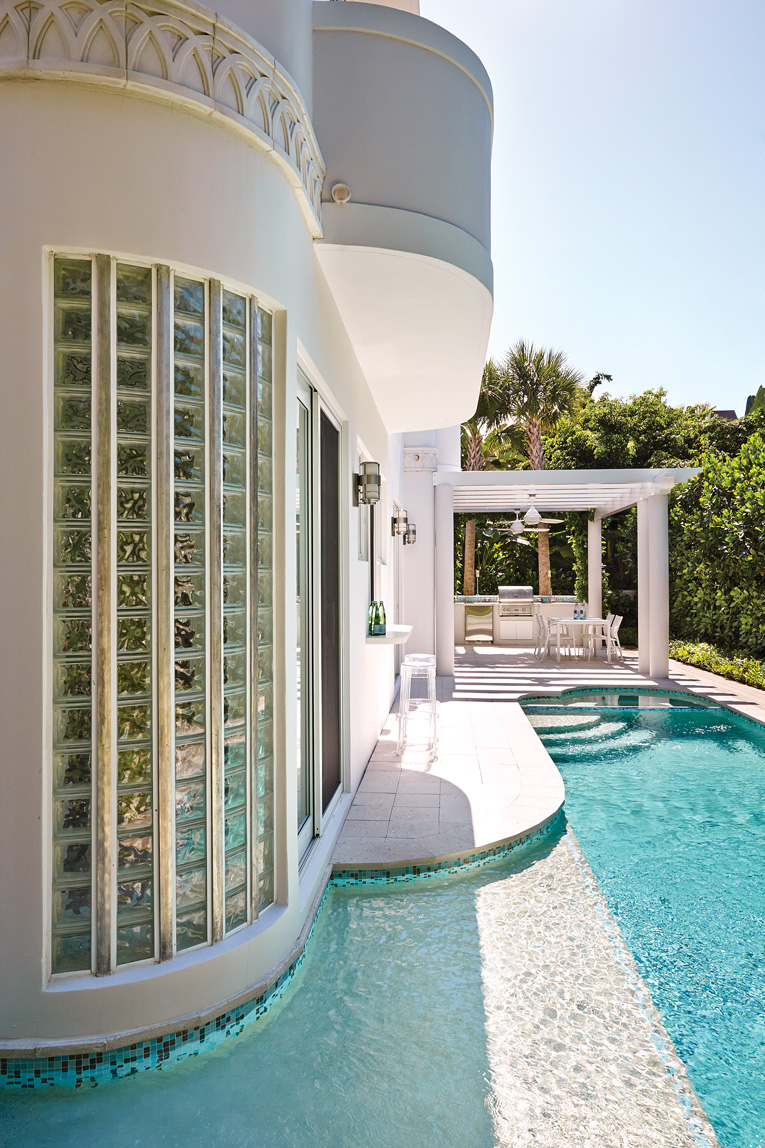 Create a Comfort Zone
Your choices for any outdoor living space, including the swimming pool, should not be driven by trends, says exterior designer Richard Frinier. There are many options to consider for a pool: shape, size, surfaces and technologies. For example, the pool Nuñez designed automatically lowers its water level when the spa is turned on, so cold water won’t splash into the spa.

Focus on the options that appeal to your lifestyle, so you can enjoy the space. “[Time] is the new luxury everyone should be seeking,” says Frinier. With this focus, your pool becomes less about how it compares to other pools, and more about how it suits you and the way you live. 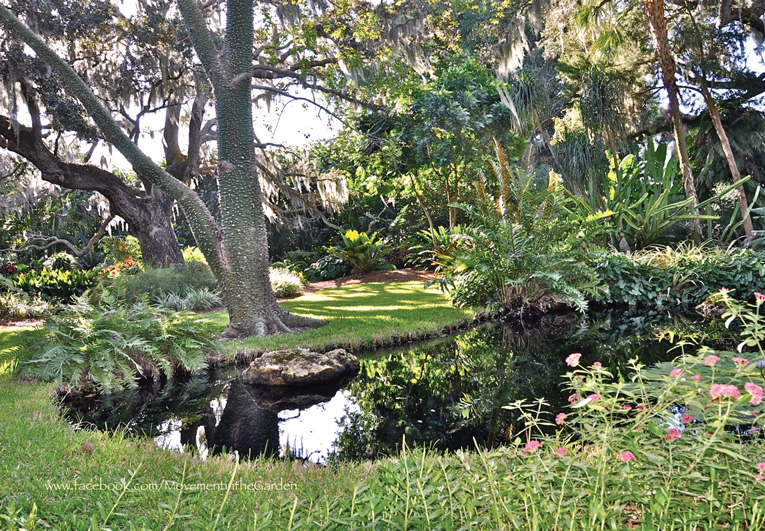 Many people think a pond means a lot of maintenance, but after a few years, it naturalizes and becomes much less demanding.

Ana and Bert Bowers of Sarasota had a waterfront home for years. When they sold their island property and moved inland, Ana missed the water. “I have always loved the feel of even a little bit of water. It’s peaceful and mesmerizing, and it invites so much wildlife,” she says.

As much as she loved her abundant tropical garden, something else was needed, and she decided on a pond. The couple searched websites, magazines and books for ideas. 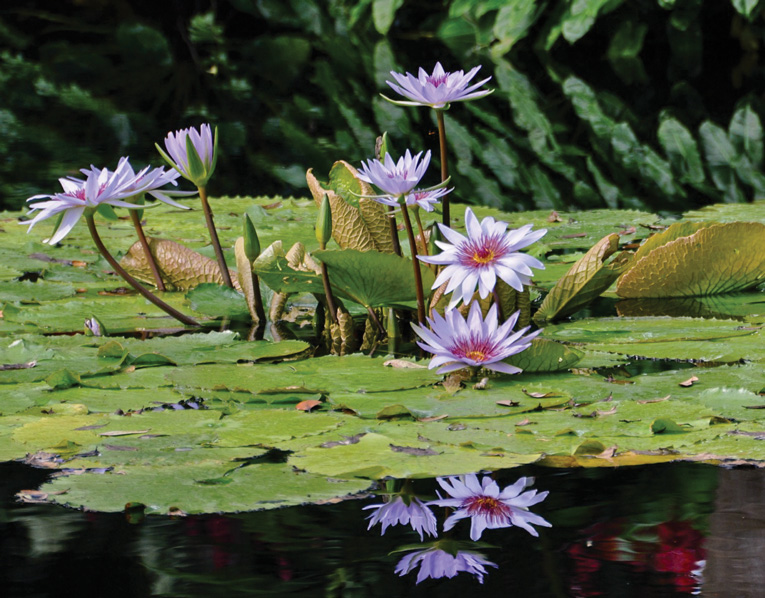 “There was one picture that stuck in my mind,” Bowers says. “It was a pond in a Japanese garden.” That image became the basis of their own pond. “It had grass lawn growing all the way to the edge of the water, and boulders inside the pond itself. That’s what I wanted to create.”

To determine the shape and size of the pond, Bowers laid garden hoses on the ground to mark off the area, and then painted a line around the hoses with landscape paint. A friend with a Bobcat (don’t we all need a friend like that?) came and began the process of excavating. With a roughly shaped hole in the ground, Bowers knew to bring in a contractor to complete the work.

Her landscape designer refined the shape and installed a heavy-duty pond liner, filled it with water and set up the filtration system. Now it was time to plant.

“There is grass halfway around it, like the photo I had seen, and then I tried different plants around the other half,” she says. “ ‘Burle Marx’ philodendron worked out well. It filled in nicely, and it loves the water so it dips its roots in over the edge, which hides the liner. Native ferns have popped up here and there. On one side, I have blooming, fragrant Sweet Almond Tree Verbena (Aloysia virgata) shrubs that I trained to go down the side to help cover the liner.”

The pond has naturalized, so Bowers no longer needs to skim algae or pick out debris. It’s almost as if the pond has always been there, and now it has become a home to a variety of birds and other wildlife.

“Blue herons, green herons, egrets, southern toads and dragonflies all hang out around the pond. One year a family of native ducks bred their family here.”

And as it goes with Mother Nature, not all goes according to plan. Says Bowers: “There was the family of river otters that ate our goldfish, and snapping turtles that ate all our water lilies.”

Bowers documents the life and times of her pond on her Facebook page, Movement in the Garden: facebook.com/
movementinthegarden 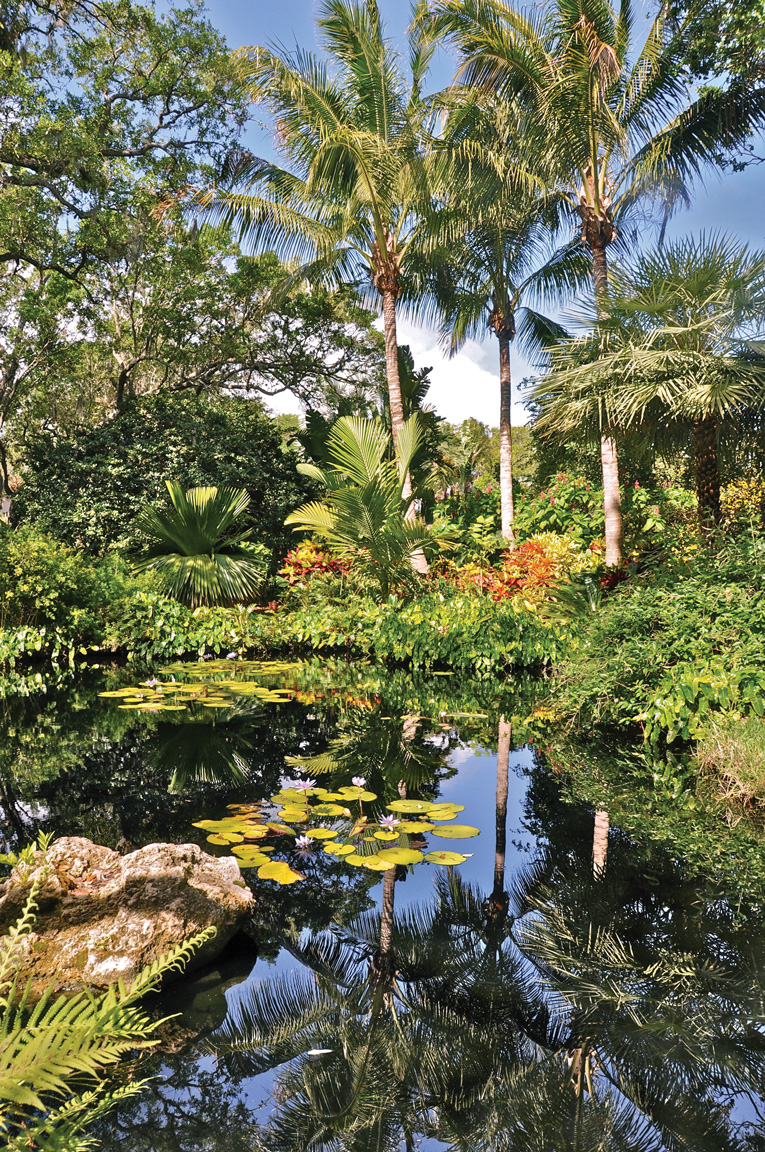 Bowers’ pond is 45 x 52 feet, which seemed large when she started her pond project, but now, she says, it feels too small. “You get more wildlife—and the pond creates more of a view from the house and other parts of the garden—when it’s bigger.”

Well-meaning advice, discouraging mishaps and other distractions can take you off course. “I was completely determined to have my pond, and for it to look the way I wanted,” Bowers says.

“There was a lot of trial and error, but I stuck with it, and now I have the prize. Go into it knowing there will be some issues to tackle, but ultimately you’ll have a pond with fish, birds and friendly bugs that bring your garden to life.”