Experience the rhythm and rebirth of a great Southern city.

Seen as a drive-by and not a destination, Macon’s magic is lost on travelers racing through central Georgia along I-75. They never see its impressive architecture, hear its musical montage or savor its soul food. A detour off the nondescript highway reveals a dynamic destination with a musical heritage as rich as a soul singer’s croon.

Incorporated in 1823 and unscathed by the Civil War, Macon’s 14 historic districts shine with architectural gems. Strolling past stunning mansions, tidy Colonial Revivals and tiny shotgun cottages, you’re bound to step on a piece of music history. 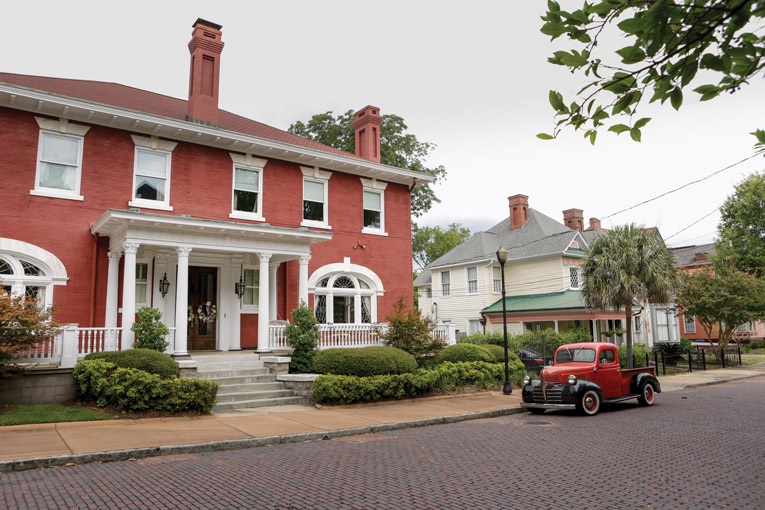 Macon made its mark with R&B, soul and Southern rock. Today, the city’s playlist embraces all genres, from alternative to hip-hop, country to classical. A mix of local and touring artists perform in pocket parks and palatial auditoriums, vintage vaudeville theaters and elegant salons.

Macon’s comeback is evident in College Hill Corridor, a hip neighborhood bordered by Mercer and downtown, which is also revitalizing. Today, both areas buzz with eclectic eateries and entertainment, and both promote a live/work/play lifestyle. In Macon, however, that’s nothing new. 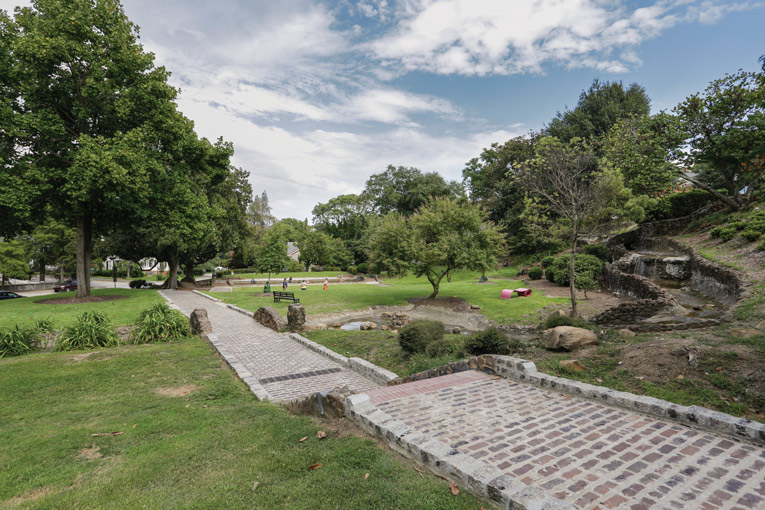 One of many in-town green spaces, Washington Park’s spring provided water for the city’s settlers.

If there’s anything the South loves more than music, it’s food. In Macon, these passions meld. Take the Tic Toc Room. Now an upscale restaurant, in the 1950s it was a smoky bar where Little Richard thrilled teenagers hungry for a new sound. “Within these four walls, rock and roll was defined,” says owner Cesare Mammarella. Around the corner, the Rookery hosts today’s talent and honors past performers with locavore dishes. Try the James Brown burger built of Georgia grass-fed beef. Find the booth where Tom Waits scrawled his name and you realize that in Macon, musicians really do come out of the woodwork. Over at H&H Restaurant, famous folks are family. “I enjoyed them boys,” says “Mama” Louise Hudson, referring to the Allman Brothers, who savored her soul food between recording sessions. Though retired, Mama still drops by the diner to check on things.

A few blocks away, grassroots and grandeur mix in the Greek Revival building featured on the Allmans’ first album cover. Now an education and performance venue, the Robert McDuffie Center for Strings draws international students and performers. It was founded by Macon-born McDuffie, a world-renowned, Grammy-nominated violinist. He plays a violin worth $3.5 million, but Maconites know him as “Bobby whose Mama played organ at First Presbyterian.” McDuffie sang in the church choir, along with Mike Mills and Bill Berry of R.E.M.

Downtown, the Otis Redding Foundation honors a beloved icon and Maconite. View the memorabilia, then learn how the foundation furthers Redding’s dream of educating and empowering youth through music. “My dad believed that music allows people to put divisive issues aside,” says Executive Director Karla Redding-Andrews. A statue of Redding sits in Gateway Park by the Ocmulgee River.

A short drive down the Highway 41 immortalized in Dickey Betts’ “Ramblin’ Man,” is the Allman Brothers Band Museum, where band members lived and wrote songs. The “Sunday morning bells” in “Blue Sky” still ring at First Christian Church across the street. A room-by-room representation of their glory days, the “Big House” is to the Allman Brothers what Graceland is to Elvis.

Die-hard ABB fans can’t miss Rose Hill Cemetery. It’s the final resting place of Duane Allman, Berry Oakley and “Little Martha,” whose tombstone inspired the Southern rock classic. While contemplating the unlikely origins of creativity, be sure to applaud yourself for not missing out on Macon.

Macon pulses to a lively beat, thanks to a medley of musical, culinary and historic attractions.

Where to Stay
Few places get road-weary travelers into a Macon mood more easily than the 1842 Inn. Situated in a historic neighborhood less than a mile from I-75, the Inn is within walking distance of restaurants and entertainment. 1842inn.com or 800-336-1842.

Getting There
College Hill Corridor and downtown Macon are 90 miles south of Atlanta, a few minutes off I-75 at Hardeman Avenue. For more information, go to collegehillmacon.com and visitmacon.org