Nancy Moreland,
On a sunny Saturday in St. Marys, Georgia, kids bicycle past homes that have sheltered generations of Low Country families. People drive golf carts along Osborne Street, the main drag, waving at passers-by. Volunteers tidy the grounds of Christ Episcopal Church Chapel, consecrated in 1889 and unlocked 24/7. Laughing Gulls chortle and careen in the sky above the riverfront, while herons silently ply the marsh.

It could be 1950 or 2014, but it’s just another day in this small Southern town where people savor life in the slow lane. Eight miles off I-95 just over the state line from Jacksonville, this coastal village is equal parts Colonial, Old South and Mayberry. Explorers arrived in the 1560s, making it one of America’s oldest continuously inhabited settlements. The town was officially established in 1787, and one of the last battles of the War of 1812 was fought here.

The town is a 2½-hour drive from Orlando, so you can leave after work and arrive in time to see the sunset on the St. Marys River. Stay in the downtown historic district and park your car for the weekend. Spencer House Inn and Goodbread House are B&Bs within walking distance to everything. One of the best ways to experience St. Marys is rolling out of a four-poster bed for a morning jog through the town’s storied streets. 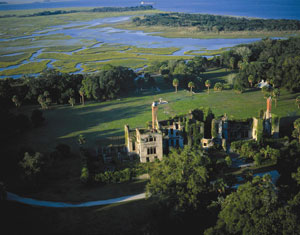 For a quick history lesson, catch a narrated 11 a.m. or 2 p.m. golf cart tour, Monday-Saturday, at the Waterfront Pavilion. Or pick up a self-guided tour brochure from the Welcome Center and explore on foot or bicycle. Rental bikes are available at Knucklehead’s Snack Shop in St. Marys Waterfront Park. One of your first stops should be Orange Hall, the “grande dame” of St. Marys. Built circa 1830, its classic white columns and towering magnolia tree preside regally over Osborne Street. Tours are offered daily.

Much of the town’s history is buried in Oak Grove Cemetery, where tombstones tell tales of settlers, sea captains and Acadian refugees. Quiet except for birdsong emanating from moss-draped oaks, its peaceful aura veils a conflicted past. Even in death, the races were segregated here. Watching over the graves of two men, the “Resurrection Angel” statue keeps an eternal secret: Both men were married to the same woman and both met untimely deaths, raising eyebrows in the 1890s.

The past is very much alive in St. Marys. Locals relax in the shade of oaks planted when Washington was President, and they worship in churches once occupied by Union soldiers. Though the town is a living museum, make time for the actual Submarine Museum. Reflecting regional ties to nearby Kings Bay Naval Submarine Base, it houses 4,500 square feet of naval history. Here, you can “spy” on Florida through a periscope and peruse artifacts, including WWII warship flags. A new exhibit will soon feature the control station from the decommissioned USS James K. Polk.

To see the Low Country up close, take a kayak tour with Up the Creek Xpeditions. You may spot otters, manatees and dolphins. Or browse for art and antiques in downtown shops. Got kids in tow? Book seats and bring a sense of humor to St. Marys Express, a theatrical train excursion through coastal Georgia.

After your active day, indulge in a plate of fried rock shrimp, a local specialty with a sweet, lobster-like flavor. You’ll find them at Lang’s or Captain Seagle’s restaurants on the riverfront. There’s no better way to bond with the coastal South than biting into crunchy crustaceans served by a waitress who calls you “Honey.” 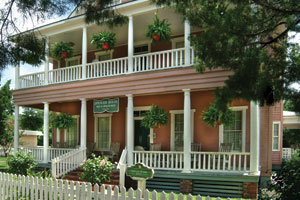 For an after-dinner dose of culture, visit Theatre by the Trax. Housed in a historic locomotive workstation, it hosts local little theater productions. Or turn in early—the quiet town is conducive to the good night’s sleep you’ll want before catching the morning ferry to Cumberland Island.

The high point of a Low Country getaway, few places rival the bewitching beauty of Cumberland Island, where wild horses gallop along beaches and mansions emerge from the wilderness. National Park Service Lands and Legacies van tours transport visitors into the heart of the island, stopping at historic cemeteries, plantation sites, an emancipated-slave settlement and a Carnegie mansion. With opulent rooms, an indoor squash court and servants quarters, the 20,000-square-foot Plum Orchard is downright Downton. After the tour, if time allows, hike to Dungeness. Another Carnegie creation, the eerie ruins evoke Jane Eyre, after Mrs. Rochester kindled a catastrophe.

Back at your B&B, soak in a claw-foot tub before meandering to a riverfront café. The rat race can wait. As Scarlett O’Hara said: “After all, tomorrow is another day.”

Like the Low Country seaport of Savannah, St. Marys has historic character, fresh seafood and a pedestrian-friendly riverfront, but at a more leisurely tempo.

KNOW BEFORE YOU GO
Tickets for the train, theater and Cumberland Island ferry and van tours sell out quickly, so book in advance. Ferry check-in is required 30 minutes before departure or reservations are canceled with no refund. visitstmarys.com

TIMING IS EVERYTHING Fall and winter offer a respite from the Low Country’s sultry summer heat. Spring can be spectacular if you catch the azaleas in bloom—usually late March to early April.

This article appears in the May 2014 issue of Orlando Magazine.
Categories: Destinations
Want to read the whole issue? Download and read this issue and others on Magzter.

From the Editor: Mulling It Over

11:00 am
Tickets
John Smoltz, the baseball Hall of Fame pitcher and standout celebrity golfer, will defend his celebrity division title at the 2020 Diamond Resorts Tournament of Champions Presented by Insurance Office of America. The eye-opening competition returns to Tranquilo Golf Course on January 16-19, 2020, at Four Seasons Golf and Sports Club Orlando. To learn more about the tournament and its...
Jan
18
Sat
The Lion in the Winter – presented by the CFCArts Theatre @ Central Florida Community Arts
Jan 18 @ 7:30 pm – 9:30 pm

7:30 pm
Tickets
Christmas of 1183, in King Henry II of England’s palace in Chinon, France. Typical family squabbles can’t compare to those of the English monarchy gathering for the holidays, especially with the king’s three sons all vying for the throne. This Christmas court is full of lies and treachery, sure to keep you on the edge of your seat! Sponsor: Central...
Jan
19
Sun
New exhibition at the Modernism Museum– Space Oddities: The Sequel @ Modernism Museum Mount Dora
Jan 19 @ 10:00 am – 5:00 pm