Living Outside the Lines

Beautiful design doesn’t have to end inside your home. Here’s how to extend those design elements and create a wow factor in your own backyard.

NOT LONG AGO, our homes were designed with clearly defined spaces that had specific purposes. We had living rooms for socializing, dining rooms for formal meals and kitchens for cooking. But then architects and designers started to blur those lines, breaking down walls and opening up our homes to create spaces that seamlessly connected every aspect of entertaining.

And now that all-encompassing approach to multifunction spaces has gone outside. Today’s lanai and pool areas are far more than simply a place to sit or swim; these wide-open spaces are Central Florida’s entertaining venue of choice, and architects, builders, designers and pool contractors are ratcheting up the alfresco ambience like never before. “I love the outdoor wow factor,” says Bob Sorenson, owner of Sorenson Construction in Gotha. “It’s definitely become more of a focus for everyone; people want to spend more time outside. Homeowners are even putting in heaters and mist cooling systems so they can enjoy their backyards in the winter or summer.”

Take a look at the wow factors on these pages for ideas you can bring to your own home. 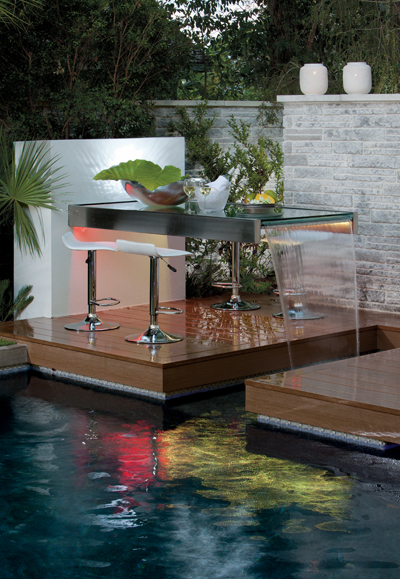 GO WITH THE Flow It’s the sort of thing that makes you stop and stare: a poolside table that can be suddenly transformed with the press of a button into a beautiful free-flowing waterfall. Water flows beneath the table’s smooth glass surface and cascades into the pool, introducing movement and sound into an otherwise static space.

Constructed of a stainless steel frame cantilevered into a concrete wall, the table appears to float in midair. The waterfall is sandwiched between a pair of glass sheets, so both the top and bottom surfaces of the table remain dry as water pours from one end of the table into the pool. At night, the area is bathed in colorful LED lights. Phil Kean, principal owner of Phil Kean Design Group, an architecture, construction and interiors firm in Winter Park, spied a similar feature in an Australian landscape magazine and decided to re-create it for his own home’s pool. Kean says he couldn’t give a cost for a “waterfall table” because each has to be custom made. Since his home’s pool area is surrounded by a high wall, Kean wanted to create what he calls a “wow” element to make up for the lack of a view: “If you have a view, then you wouldn’t want to detract from the view, but if not a lot is going on, a ‘wow’ feature can create a little drama,” he says. With a kinetic water display like this, who needs a view? 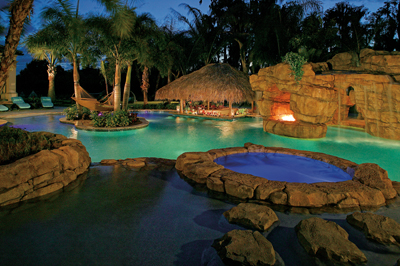 FIRE & WATER When you put water and flames together in a pool setting, instead of one dousing the other as would happen naturally, the two elements actually intensify each other. The reflective quality of water amplifies fire’s movement and energy, creating a play of shadow and light that enlivens the alfresco scene.

First came the fire pit trend for outdoor living, and then someone had the bright idea to actually incorporate fiery elements as pool features. Now, flaming accents set near or even in water are adding lively flair to our aquatic retreats. Other popular features include fire troughs and vessels, as well as torches and columns topped with fire. Waterfalls and other moving water features, either adjacent to or on either side of a fire element, are also top options, underscoring the contrast between flickering fire’s heat and the cool, quenching quality of water.

Such fire elements are typically powered by propane or natural gas delivered through pipes concealed by faux rock, stucco or concrete. They can be turned on with the flip of a switch or the push of a remote button. Custom homebuilder and remodeler Victor Farina, president of Farina and Sons in Orlando, says that such features can add between $3,500 and $7,500 to the cost of a pool.

“All the designers are trying to find a way to get that flame out there; it’s a nice added feature to have,” says Farina. “It’s all part of the ambience outside.” 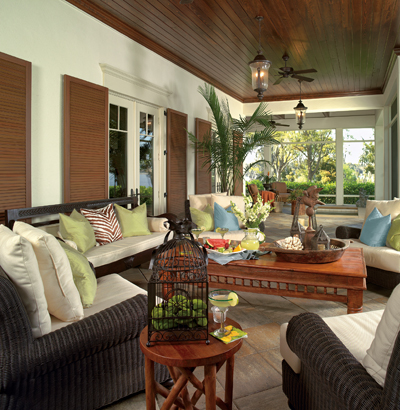 EASY LIVING A single focal point simply wasn’t enough for Julie Sandberg, design principal of Tortoiseshell Interiors, when it came to designing her own outdoor space. Sandberg’s lakefront home in Windermere has a natural wow factor—Lake Butler—that she capitalized on by positioning a Jacuzzi overlooking the lake. “You feel one with nature while soaking and taking in the lake, trees and wildlife,” she says.

Sandberg continued her design element throughout the lanai that embraces her coastal Colonial-style home. In addition to the Jacuzzi area, the lanai includes a large entertaining space and a dining area with a fireplace and fully equipped summer kitchen.
Vaulted cypress-paneled ceilings, eight-foot shutters and nautical lanterns contribute to the visual appeal. To complete the stunning setting, Sandberg feathered her outdoor nest with overscaled lounge chairs, an Indonesian teak bench, a conversation grouping in front of the fireplace and a dining table that comfortably seats six.

You may not have the 1,700 square feet to work with that Sandberg did, but you can take a cue from her design and create well-defined areas for dining and entertaining. And while she has a built-in fireplace, which can cost five figures, you can bring in a fire element for less than $1,000 with a gel-fuel fire feature, which has the added benefit of mobility. 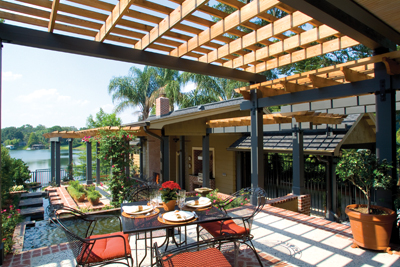 FINE FRAMEWORK Bringing a structure into an outdoor space adds depth, dimension and drama—and a pergola can work with virtually any style of home. Thanks to their airy and open design, they provide shade without overshadowing a space.

PSG Construction included several pergola structures in an extensive backyard project on Lake Highland in Orlando. “It was a very custom design,” says PSG’s owner, Paul Gidus. “This wasn’t your basic bricks and mortar project; it was very detailed, and the pergolas helped make the whole thing very unique.”

The PSG project used pergolas to define spaces around an extravagant pool and water feature, but Holland Pools and Spas in Longwood has actually used pergolas as part of the pool itself. Holland pool designer Stephanie Baumgartner even took it a step further, turning the pergola into a water feature, too. Water spills from a hidden channel along a cross beam into the pool, while the pergola itself frames and shelters the adjoining spa.

“As of now, we have installed at least seven of these pools,” Baumgartner says, including in the Braemar development in Gotha.

Custom pergolas can cost $25 and up per square foot, but more affordable, ready-made models can be found at major retailers for a few thousand dollars each.