Like Moths to a Flame at Orlando Story Club

A few stragglers hurry up the steps of the stage to toss their name in the hat. Literally. If you want to tell a story, you write your name on a slip of paper and put it in the hat.

This is Orlando Story Club, a regular event hosted by the Downtown Arts District, and tonight’s theme is “Can You Keep a Secret?’’ Sixty people have shown up at The Abbey for the storytelling meet-up, a local spinoff of The Moth, the popular live storytelling events held across the country that draw fans via The Moth Radio Hour podcast. The main difference in Orlando is that everyone donates five bucks at the door, with all proceeds going to a designated charity.

Most people stop first at the bar for some liquid courage before host Bobby Wesley gets things started by pulling the first five names from the hat, each with a story to share that is inspired by a pre-selected theme (past examples have been “Bravery,” “Body” and “Breaks”). A total of 10 names will be drawn throughout the night and listed on a board. Each person will have five minutes to tell his or her story.

“The premise of story club is that you are telling a true story in front of an audience, without notes,” Wesley tells the audience. “There’s a vulnerability that creates immediate intimacy. Storytelling is how we learn about each other. It’s also an opportunity for some of you to get a story off your chest.” 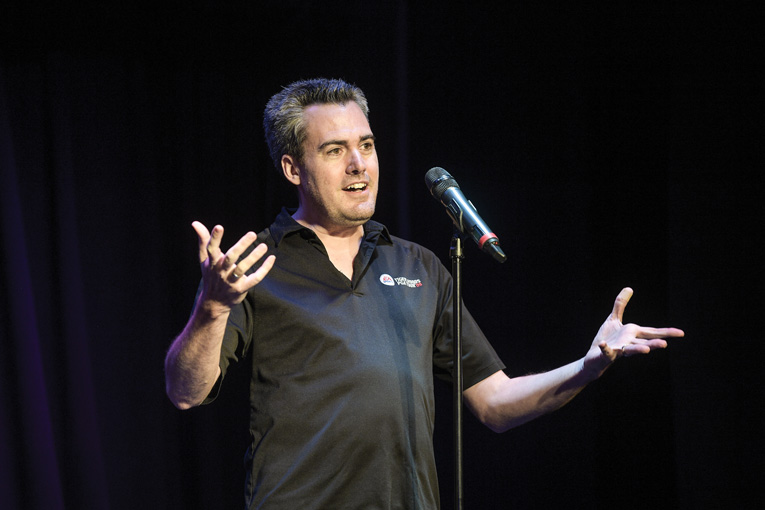 Based on a show of hands, about half the crowd are first-timers. Wesley hands out three dry-erase boards to audience members—a rookie, a regular and someone chosen at random—to be judges. Their job is to assign a score from 1 to 10 following each story. The marks will be recorded, averaged and the top three will be tonight’s storytelling slam winners.

The one person who is physically absent yet incredibly present is Robin Cowie, whose enthusiasm and passion for building community through storytelling led him to launch Orlando Story Club in 2014 at East End Market.

Cowie, who is best known as producer of the genre-busting classic horror film The Blair Witch Project, stumbled across The Moth while living in Los Angeles. “I started competing in L.A., won the Santa Monica division, and pretty quickly became hooked,” he says. He missed it so much after returning to Orlando that a friend suggested he start something similar here.

“The main thing I wanted to do was to involve a charity at every event,” says Cowie. “I wanted to further the art of storytelling and make contributions to the community.” About 150 people showed up to his first event and he kept them going as best he could, but Cowie’s demanding schedule prevented him from making it a regular gathering.

Enter Barbara Hartley, executive director of Downtown Arts District, who offered to take on the event as a regular part of DAD’s programming while continuing Cowie’s legacy of supporting local nonprofits. DAD has hosted Orlando Story Club regularly at The Abbey since January 2016. Though Cowie is no longer in the room, his passion has clearly been shared.

One by one, the storytellers climb the stage, clutch the mic and stand in the blinding spotlight, sharing their true tale with an audience they cannot see. Some stories are polished and practiced, while others are off-the-cuff, being told for the first time.

Tonight’s “Can You Keep a Secret?” lineup is equal parts men and women, ranging from college students to nearly retired. One of the first up is Benjamin Gallagher, a creative writing student at UCF. This is the second time he has participated—Gallagher won second place for his story at the “Bravery’’ theme night. This time, he reveals how his third-grade doodling of “I love Charles” on an envelope nearly outed him to his parents. Instead, he channeled his energy to “hate” the boy on whom he had a crush.

Chris Thornhill reveals how he’d been covering for his two-timing best friend until the lies came back around and landed directly at his feet. Thornhill wraps his story with a punchline to the audience’s gut. There is a collective, audible gasp as he lands the last seven words, told to him by the distraught girl he was comforting: “He told me he was with you.”

At intermission, Liu Damiani, the executive director of tonight’s nonprofit beneficiary, Victim Service Center, sticks with the “secrets” theme to share with the audience a little about how they serve our community. It turns out that victims of abuse keep their secrets well beyond the four-year Florida statute of limitations for prosecution. The VSC staff compiled data that helped change Florida law to reflect the actual average length of time it takes for victims to report their abuse: eight years.

Drinks have been refreshed and the final five names are pulled. Veteran storyteller Robin Schulte, who won the Story Slam competition at the 2014 National Storytelling Festival in Jonesborough, Tennessee, is in her element. Schulte transports the audience to a hot summer’s day at a murky Midwestern lake where she loses her mother’s class ring, which she had “borrowed” without permission. The story puts her in the winner’s circle.

But first place goes to Jesse James. He tells of signing a non-disclosure agreement to secure “the coolest job I’ve ever had in my life”—a secret he had to keep for three intense and exciting months. He lets the audience in on the final reveal to his family: He had been interviewing astronauts (in their living rooms!) to capture their stories for the “Heroes and Legends” multimedia exhibit at Kennedy Space Center.

James has been a longtime fan of The Moth Radio Hour because of  “the incredible nature of people telling their own stories.’’ When he heard of Cowie’s events in Orlando, “I was so excited that someone was trying it here,” he says. “I put my name in the hat every time.’’

James says he puts a lot of thought into scene setting, timing and the punchline of his stories. “You have to think about the structure of the story as though it’s a magic trick and you’re using sleight of hand to misdirect the audience in order to deliver a surprise ending.’’

After the winners are announced and collect their donated restaurant gift certificates and such, there is a shared connection buzzing through The Abbey.

“Storytelling is a great tool to help people with public speaking,” Hartley says. “People hear others and realize they have a story to share too, and telling a personal story is easier than making a prepared speech.”

Still need a tiny push to come to the next Orlando Story Club event and put your name in the hat? Cowie promises it’s easier than you think and that you’ll never regret it.

“There is this wonderful ‘in the moment’ essence to take away from actually sharing your story,’’ he says. “Until you’ve done it, you can’t actually appreciate it. You are working in a supportive space. There’s no way you can fail.”

The Story of You?

Orlando Story Club gatherings are every other month at The Abbey in downtown Orlando. The next event is July 12 at 7 p.m. The theme: “Is It Love?” Proceeds will go to Timucua Arts Foundation, which presents concerts at its legendary White House performing space. First-timers are welcome to put their name in the hat. You can view past stories at OrlandoStoryClub.com