Through an annual symposium, Randy Robertson seeks to guide us—and himself—to the places where art and spirituality meet.

Randy Robertson had a problem with his Orlando marketing business, which specialized in staging personal appearances by noted sports figures. The business was doing just fine. The problem was that he could run it in his sleep.

He longed for an awakening.

He expected to find it when he closed his firm down eight years ago and enrolled himself at the General Theological Seminary in Manhattan, the oldest Episcopalian seminary in the country. There, at the age of 56, during a month of quiet reflection in the dead of a Lenten winter, he wound up abandoning his plan to become a priest. 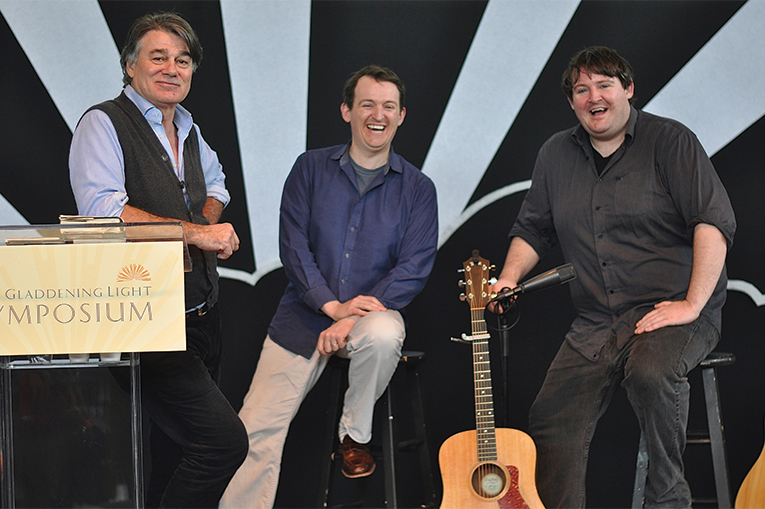 Not that his stay at the seminary was wasted. Some are called to spirituality’s center stage. Others discover in themselves a gift for setting the scene.

Not long after returning home, Robertson began developing GladdeningLight, his vision for a nonprofit enterprise devoted to creating events that explore the intersection between art and spirituality. Its primary focus: an annual, interdenominational, progressive symposium that has brought hundreds to Winter Park to see performances and lectures by poets, musicians, artists, scholars, writers, and religious leaders.

“It’s like a spiritual gumbo,” says Robertson, his arms outstretched straight in front of him, his fingers splayed as if he’s a metaphysical maître d’ setting down a reflective repast for some invisible gathered multitude. He once spent his days shuttling between sports celebrities and corporate sponsors to broker personal-appearance events for doting fans. With GladdeningLight—the name is a reference to the first known Christian hymn, a third-century entreaty for spiritual illumination and protection—he’s traded athletics for aesthetics, sports for spirituality.

One year, his keynote speaker was the outspoken author and scholar Richard Rohr, a Franciscan friar turned ecclesiastical renegade who has his own Center for Action and Contemplation in Albuquerque; emphasizes contemplation and compassion over what he calls “verbal orthodoxy”; and alarms traditional Catholics for suggesting, among other things, that God isn’t necessarily male.

Another year, complemented by two brothers who sang sacred folk songs and Gregorian chant, the keynoter was David Whyte, a sought-after speaker with Irish roots who writes poems that feel more like prayers and tells stories that blend earthy with ethereal. (Whyte likes to talk of the time he walked into a quiet pub in Connemara, ordered a pint of Guinness, and heard a man at the bar observe, in a thick regional brogue and to no one in particular: “There was a fella on the telly last night sayin’ we have to rethink infinity.” Whyte turned to him and asked: “How are you coming along with that?”  To which the man responded: “Well, I’m three pints into it, and I’m no further along than I was with the first.”)

The secular and the spiritual tend to rub shoulders in much the same way at GladdeningLight events. Last year, a crowd filled a rustic Rollins College chapel to watch a devout 1928 silent film dramatizing the life of Joan of Arc while listening to a live performance of an oratorio dedicated to the French martyr and consecrated saint. The experience left many in tears. It was coupled with an appearance by a noted medieval scholar who analyzed Joan’s trial and execution for heresy as being more a matter of cut-and-dried 15th century politics than a timeless tale of religious inspiration.

“We are living, in the 21st century, in a post-denominational world,” Robertson explains. “There are a lot of people in the abyss, wandering around asking serious questions, and not content with the old structures.”

The seventh annual GladdeningLight incarnation will feature its most expansive theological foray to date.

The keynote speaker is Krista Tippett, the National Humanities Medal and Peabody Award-winning broadcaster of the public radio program On Being. Tippett, author of Becoming Wise: An Inquiry into the Mystery and Art of Living, is a veteran journalist with a Master of Divinity from Yale University and a serene, plainspoken interviewing style that has plumbed the wisdom of the Dalai Lama, Maya Angelou, Elie Wiesel, Yo-Yo Ma, Thich Nhat Hanh and Desmond Tutu, among others. (You can find many of those conversations on YouTube).

She’ll be joined by New York Times film critic A.O. Scott, author of Better Living Through Criticism: How to Think About Art, Pleasure, Beauty and Truth; Argentine film score composer Gustavo Santaolalla, a yoga enthusiast who won back-to-back Academy Awards for the scores of Babel and Brokeback Mountain; and poet Billy Collins, Winter Park Institute’s affable, loquacious artist in residence who is a golfing buddy of Robertson’s and has become an informal ambassador for GladdeningLight.

Titled  “The Spiritual Lens: Evocations on Poetry, Music and Film,” the symposium will emphasize the enlightening potential of movies. “We’ve sponsored museum exhibits and hosted photographers, painters and sculptors for previous symposiums—but never thoroughly examined the evocative nature of film,” says Robertson. “It will be a joy to delve into the movies together with Krista Tippett and such a distinguished group of artists.”

He says he hopes participants will emerge from the symposium, which will take place Jan. 25-28 at multiple sites across the Rollins College campus, with a deeper way of experiencing the spiritual aspects that some films explore. There’s no reason, he says, to assume a spiritual insight can’t coexist with a bag of popcorn and a trip to the mall.

“When you’re brought to tears or get goosebumps at the movies, that can represent a doorway to greater depths of feeling,” he says.

Admission to Tippett’s keynote address Friday evening is $25. The cost of the entire weekend is $280. Admission is free to Rollins students and faculty.

You might not expect somebody who talks about a post-denominational world to turn up in a pew on Sunday morning, or to be welcomed with open arms if he did. But Robertson and his wife, Pat, daughter of the late Jay Schenck, a civic leader and philanthropist who owned Central Florida’s largest beer distributorship, are parishioners in good standing at All Saints Episcopal Church in Winter Park.

“I like to think of myself as that funny old guy you see in church who’s been around forever, and nobody know exactly what to make of him,” he says.

The GladdeningLight symposiums were actually held in the All Saint’s assembly hall until moving to the Rollins campus this year—thanks largely to the sponsorship of Rollins President Grant Cornwell, who is a Krista Tippett fan. 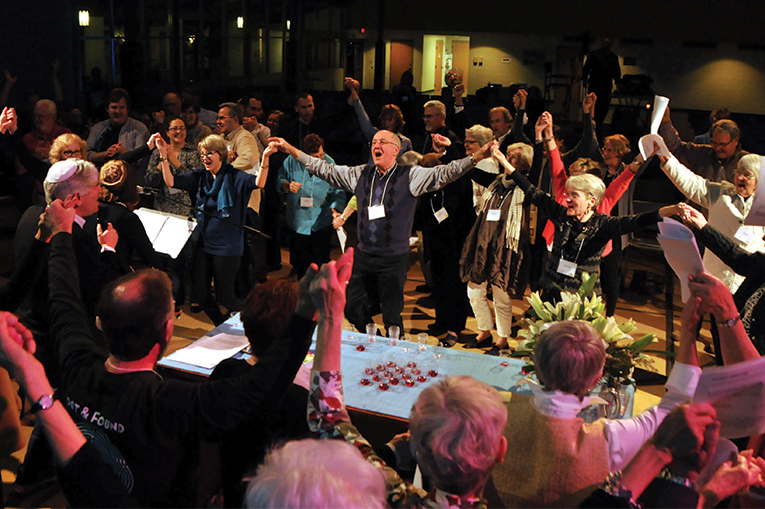 A moment from a previous gathering. (Courtesy of Randy Robertson)

Growing up in Jackson, Miss., Robertson had a fundamentalist upbringing: Raised in the Church of Christ, he was sternly lectured as a boy on the dangers of either dancing with girls or, heaven forbid, swimming with them. After meeting and marrying Pat, whom he refers to as a steadying “cradle Episcopalian” and his “spiritual right arm,” he was an easy convert to a considerably less restrictive denomination.

His fascination with the arts and their capacity to evoke spiritual themes actually predates his stay at the seminary. In the early 1980s, he became part of a band of serious movie lovers who created a series devoted to indie films that were screened at the Orlando Museum of Art —an effort that evolved into the establishment of the Enzian Theater and, eventually, the Florida Film Festival.

He also became fascinated, a few years later, with the works of Madeline L’ Engle, the beloved writer of children’s books and religious meditations, particularly The Glorious Impossible, which combined Giotto frescoes with her narrative depicting the life of Christ.

He’d seen those frescos firsthand and been entranced by them himself on a trip to the Scrovegni Chapel in Padua as a college student. So he decided to take a temporary detour from sports marketing: What if he could orchestrate a multimedia event involving a live narration of the book by L’Engle with a slideshow of the frescos accompanied by inspirational music?

He decided, on impulse, to pitch the idea to the famous author. Ever the hustling marketer, Robertson is as proud of the successful cold call he made to her from a phone booth on State Road 436 in Casselberry as he is of their subsequent success with the show.

Apart from that, the collaboration with L’Engle presaged his Lenten-winter inspiration, years later, to develop GladdeningLight, and the friendship that developed between them was a key part of his own spiritual journey.

“I learned so much from her,” he says of Le’Engle, who died in 2007. “How to remain open to infinite possibility. How to be truly present for others.”

“There’s just a deep grounded-ness in Randy,” says Lezlie Laws, a former Rollins College English professor who coaches creative individuals and has attended several GladdeningLight events. “I have a radar out for people who emanate a deep conviction about what they are called to do, people who go to great lengths to create a context, a framework, a platform to express themselves. Randy has done just that with GladdeningLight. He’s impish. He’s joyful. And he’s tenacious.”

Like many other spiritually oriented authors, Barbara Brown Taylor, author of Learning to Walk and several other spiritual tomes, sees enlightenment as a two-way street: She writes not only for her readers, but to explore bedrock questions of her own. Taylor, who was the keynote speaker at the 2015 GladdeningLight symposium, says she sees, in Robertson, a kindred spirit who’s simply operating on a parallel track.

“We write the books we need to read,” she says. “Randy creates the kind of events he needs to attend.”