Local artisans infuse The Gates Hotel with the essence of Key West for an authentic visitor experience.

Think Key West and most people picture Old Town: the lively restaurants and shops on Duval Street, sunset celebrations on Mallory Square and the iconic red and white marker denoting the southernmost point in the U.S. But for locals, the biggest excitement in Key West is the activity in New Town. Key West has long been known as a hive for creativity, with famous residents from painter Winslow Homer to writer Ernest Hemingway. So it’s only fitting that The Gates Hotel, Key West—the newest property on this burgeoning northwest corner of the island—turned to a contemporary cast of artists, authors, chefs, and even a rum distiller to deliver a new Key West experience that is every bit as authentic as the one most people know and love. 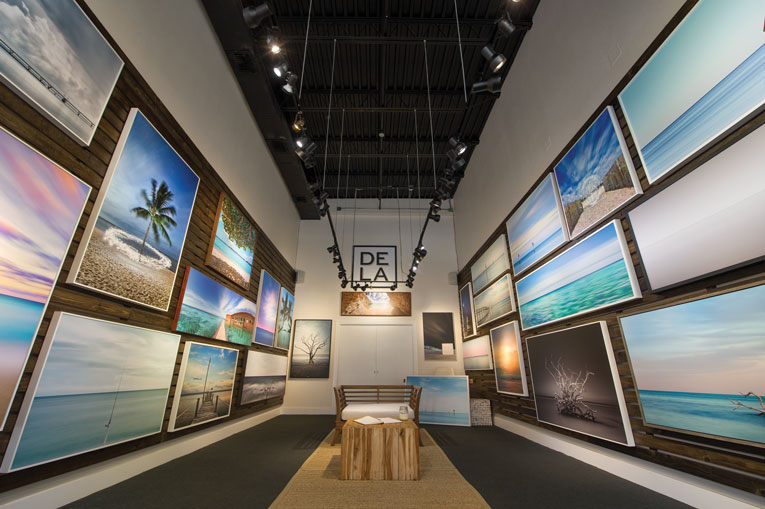 COURTESY OF THE GATES HOTEL

LOCAL ARTISTS The minimalist lobby of The Gates showcases four oversized photographs by Jorge de la Torriente, capturing the light and color of the surrounding sea. Five additional images, digitally printed and finished with a matte laminate that gives the impression of a painting, are shared in guest rooms. You can see the artist’s larger body of work at De La Gallery on Duval Street, just as the hotel’s designer Andrea Henzlik did when she was searching for Keys-based art for the hotel. “Andrea walked in,” recalls de la Torriente, “and said ‘I don’t have a Plan B. This is what I want.’ ” You, too, might fall in love and leave with a timeless souvenir.

The pet-friendly rooms have a cool motel vibe, and the crisp, modern décor puts de la Torriente’s watery photos center stage. Bed-top runners made from repurposed coffee sacks are hand-painted by local artist Noelle Rose to look like a cigar band—a nod to The Gates’ partnership with Rodriguez Cigar Factory. You can enjoy a Rodriguez cigar on site, or visit the factory in Old Town to see how the family-run production still hand-rolls in the traditional way. 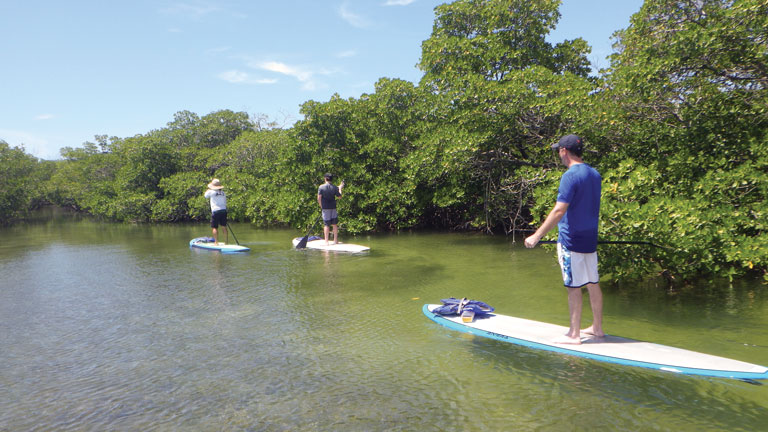 Permanently parked beside Rum Row, the poolside bar named for Prohibition-era Key West, is the Blind Pig food truck, spearheaded by Chef David Fuhrman and his wife Julie, who are well-known on the island for their Great Events Catering. The Blind Pig (another name for a speakeasy during Prohibition) features a tapas-style selection of Cuban, Bahamian, Caribbean and Floridian flavors—items such as conch salad, grouper sliders and a modern take on the muffuletta sandwich. Taste his food and you’ll call Chef David an artist, too.

LEGAL RUM-RUNNER Perhaps the partnership that most infuses The Gates’ guest experience is that with Paul Menta and his Key West First Legal Rum Distillery, housed in Old Town in what was the Coca-Cola factory from 1903 to 1974. Menta, a Conch (resident) of 22 years but a Philly boy at heart, lives his passions: pro kiteboarder who runs a training institute, chef turned restaurateur, author who evangelizes dock-to-dish cooking in the Keys, and distiller who has been honing the craft of making booze for more than 30 years. Key West Legal Rum is in itself a distillation of all his loves.

Visit any day of the week for a full immersion lesson, starting with actual Key West Sheriff’s Department mug shots of Prohibition-era rum-runners and memorabilia from the Coke factory. The distilling room is part museum, kitchen, science lab and pirate’s den. A black-and-white image of 1920s Pelicans (those who’d steal the barrels dropped in the shallows by rum-runners from Bimini and then sell the illegal booze) fills one wall; stacked barrels set to age are piled about; and floor-to-ceiling copper and brass stills are a modern-day distiller’s cauldron. Even the swirly type used on the posters and labels is derived from the first map drawn of the island, says Menta. But make no mistake: The alchemy derived of pure Florida sugar cane, heat, humidity, sea salt and locally sourced, seasonal ingredients, is the star. Best of all, tastes are free, and there’s always an open bottle to sample. A favorite is the Spiced Rum, with cardamom, cloves, vanilla bean, allspice and finished with purple basil, “which makes it refreshing,” says Menta.
But the best way to try Legal Rum is in the thoughtfully created cocktails back at The Gates’ rum-runner inspired bar. Rum Row’s cocktail menu is a virtual history lesson by Key West mixologist Robyn Whitehead. For instance, Up in Smoke gives a nod to the island’s cigar business dating to 1831. Aged Key West Raw and Unfiltered Legal Rum with smoky double-distilled mezcal is finished with a ginger syrup and lime. The glass is rimmed on one side with tobacco from a Rodriguez cigar, lending its aroma while you sip. The taste is Key West past, present, and future—all in a single glass.

The Gates manages to bring Key West’s history and artists to you, layer by layer, until you don’t feel the need to seek it out on your own. Sometimes, an island vacation doesn’t need to be more than that. 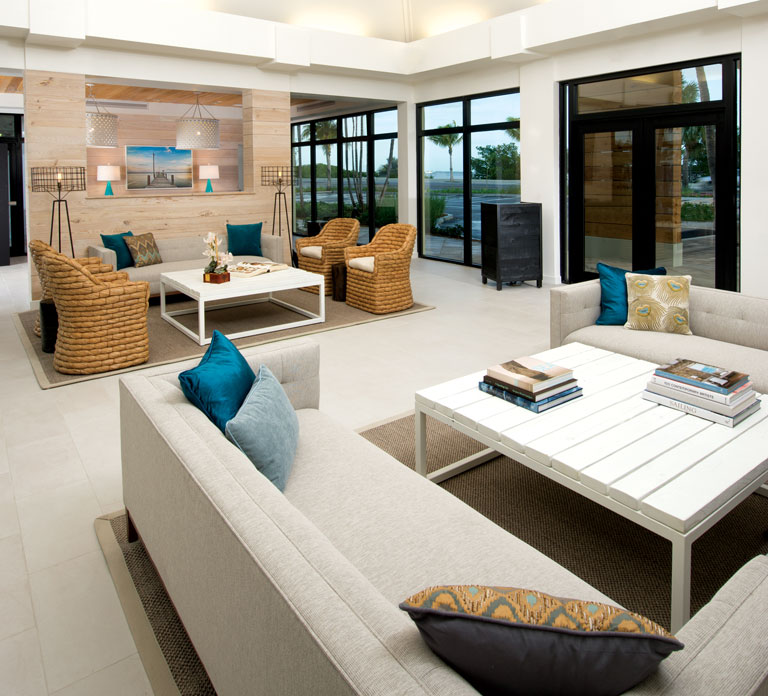 COURTESY OF THE GATES HOTEL

The contemporary, minimalist entry of The Gates Hotel

Venture beyond The Gates Hotel and explore nearby Stock Island on two wheels for a chilled-out Key West experience.

Already explored Old Town? Try a little island-hopping. Take one of The Gates’ custom Martone bicycles along the bike-friendly path across the Cow Key Channel Bridge to Stock Island for a morning stand-up paddling tour with one of Lazy Dog’s expert guides. You’re likely to see iguanas, manatees, nurse sharks, maybe even an octopus. Afterward, ride another mile or so to refuel at Hogfish Bar & Grill, an authentic Florida fish shack that serves surprisingly good food, cold beer and has plenty of seating with marina views. On your way back to the hotel, stop at the Key West Botanical Garden and Tropical Forest for a self-guided tour of this biodiversity hotspot that provides habitat to all 36 remaining butterfly species in the Florida Keys.

This article appears in the August 2015 issue of Orlando Magazine.
Categories: Local Getaways