Sitting through one lousy movie is tough enough, but two? For some people, that’s entertainment.

For most of my life I have been on a journey—a quest to find great movies. It’s a mission I approach with considerable seriousness and an open mind, which means that, in pursuit of the best films, I’ve had to sit through a lot of the worst.

So, yes, I have seen Plan 9 From Outer Space by the famously inept Ed Wood, as well as Kevin Costner’s water-torturelike Waterworld, Halle Berry’s catastrophic Catwoman and much of the David Arquette oeuvre, especially his little-known wrestling opus from 2000, Ready to Rumble. And I’ve discovered that even some movies that are revered as classics—Gary Cooper’s 1942 baseball epic, The Pride of the Yankees, for one—turn out, upon closer inspection, to be virtually unwatchable.

After absorbing so much cinematic abuse through the years, I’m always amazed that some people deliberately seek out bad movies. And yet, I know that such cine-masochists definitely do exist.

In fact, I encountered about 30 of them who had assembled on a recent Friday evening at Urban ReThink in Thornton Park for a meeting of the Bad Film Appreciation Society (badfilmappreciationsociety.com). It’s not really a club, though; you just pay a $6 admission and you’re in.
An unembarrassed celebration of embarrassingly awful movies, the event was organized and hosted by Michael Poley, 29, and Imar DaCunha, 36, friends with shared interests in comedy and cheesy flicks. As they typically do at these monthly gatherings (which began last October), the hosts appeared in costume as, respectively, Conrad Gentle and Dr. Longwell Emeritus (inexplicably pronounced em-er-RITE-us).

The former wore a black suit and eye patch, while his partner was dressed in a white lab coat and red bowtie. The backstory is that Gentle, a victim of “bad film lover’s syndrome,” lost one of his eyes (and much of his mind) watching substandard cinema, and the doctor is trying to help him.

As the evening began, they led the audience in a recitation of the society’s oath, which ends with this profound observation: “Life is a mystery that is occasionally filmed.” Then they introduced two somewhat edited Grade-Z movies.

“…that are neither romantic nor comedies,” added Dr. Emeritus, setting the satiric tone for the evening.

Chances are that you’ve never heard of these zero-budget films, even though both are quite recent. The first, The Book Club, focuses on a young gay woman who is invited to join an ostensibly straight female book club and suggests a lesbian novel for the group to read.

The second, Derek and Delila, concerns a man who develops an intimate attachment to a life-sized female blow-up doll. It’s basically the same premise as Lars and the Real Girl, a moving, 2007 Oscar nominee that I discovered on my quest for great films; but that premise is where the resemblance ends.

I suppose Derek and Delila is somewhat tackier than The Book Club, but we are splitting hairs. And although, on some absolute scale, neither is really that much worse than Ready to Rumble, their production values (so to speak) are far lower.

“These films are not trying to entertain you,” Dr. Emeritus archly explained, early in the evening. And it’s true that you have to be a certain kind of person to find this type of movie entertaining: snarky yet patient, hypercritical yet easily amused, obsessive about film and yet not a connoisseur, except in the most perverse sense.

I guess we all have our own quests.

Part of the fun of bad movies is sharing your feelings about them with the likeminded, and at this event the camaraderie was certainly contagious. It was also a plus that Poley and DaCunha have a knack for making fun of bad films, à la Mystery Science Theater 3000 (still the gold standard in trash appreciation).

As Gentle and Dr. Emeritus, they pointed out, for example, that in The Book Club, the gay heroine looks at one of the other women the way a velociraptor stared at its prey in Jurassic Park. Then they illustrated the concept with a slide that showed the heroine with a fierce dinosaur head.

Despite the evening’s high spirits, I still marvel that some people can, on a monthly basis, deliberately sit through a terrible movie, let alone two terrible movies, in a single evening. This “bad film lover’s syndrome” must be powerful stuff. 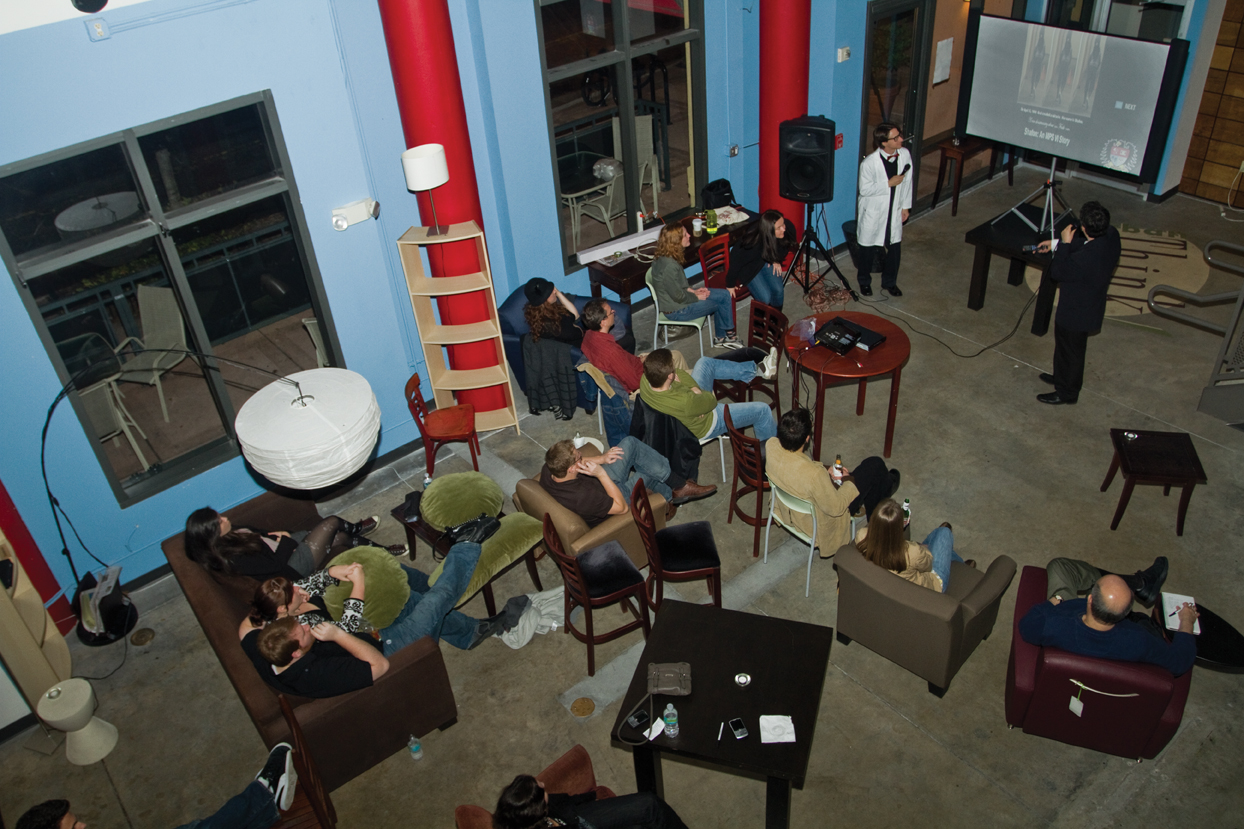 Cine-masochists gather for a monthly meeting at Urban ReThink in downtown Orlando. 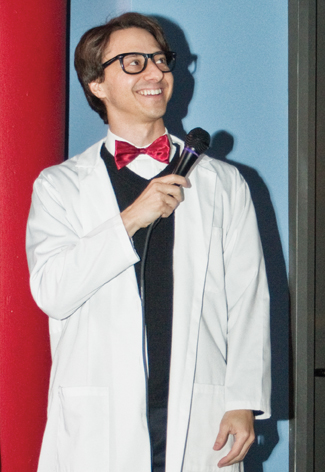 This article appears in the April 2011 issue of Orlando Magazine.
Categories: News and Features