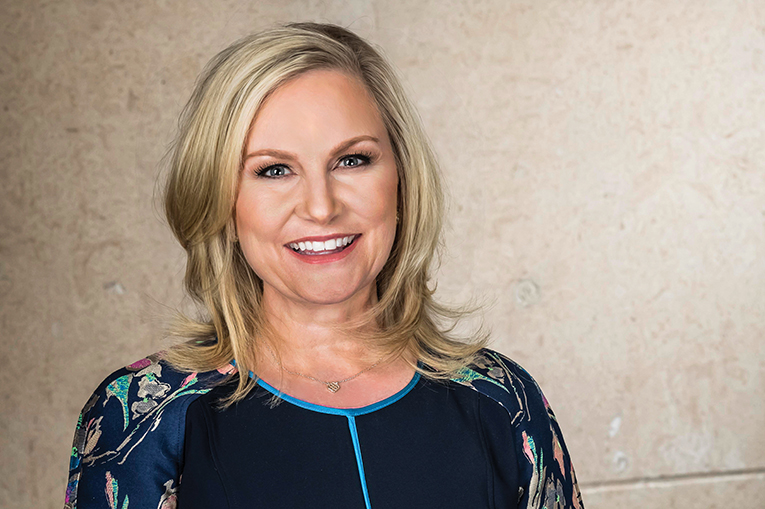 Casandra Matej brings a wealth of experience in the tourism industry to her position as CEO of Visit Orlando. (ROBERTO GONZALEZ)

It’s been just one year since Casandra Matej, president and CEO of Visit Orlando, took the helm to steer Orlando’s tourism ship. Since then, she’s had one eye on rapid pandemic recovery and the other on long-term travel industry growth. So far, it’s been smooth sailing with just a few squalls along the way, linked mainly to travelers’ pandemic concerns.

​And people are flocking back to Central Florida. Visit Orlando’s three-year strategic plan estimates that 2022 visitor numbers will be at 90 to 95 percent of 2019’s pre-pandemic totals. Matej says the tourism association’s goal is to reach 80 million visitors in 2024.

​“I do think we are ahead of our competition because we are open,” says Matej, who was named in 2021 one of Orlando magazine’s 50 Most Powerful People. “We’ve been able to host visitors and conventions, and we are set up for success because we’re a trusted destination with trusted brands like Walt Disney World, SeaWorld, Universal … and so, I do think it’s absolutely achievable to be at 80 million visitors in 2024.”

​Visit Orlando plans to make it easy for anyone to visit the world’s theme park capital. In November 2021, the association  partnered with Tripadvisor to create the first immersive audio tourism experience on the continent via Amazon’s Alexa. By asking their Amazon smart speakers to “launch Visit Orlando,” folks who are planning trips can learn more about Central Florida’s  signature destinations as well as the “hidden gems beyond the parks,” Matej says.

​It’s a cutting-edge way to reach travelers, she adds. “We should always look at what’s new, whether it’s a trend or whether it’s going to be impactful to get the message out about Orlando. Because we’re such an innovative destination, we should take calculated risks in new ways.”

From Administrative Assistant to CEO

​The former CEO of Visit San Antonio, Matej came to Orlando last February with 28 years in the tourism industry working for hotel companies and other cities’ destination organizations. Her career track, she says, was “an unintentional pathway” from administrative assistant to chief executive officer.

​After a “very normal, middle-class childhood” in small-town Texas, Matej met challenging hurdles in her second college semester at the University of Texas when her parents encountered hardship and told her she would have to leave school.

​“I said, ‘No, I’m at one of the top schools.’ I said I’d figure it out and I worked my way through school. There were times I had three jobs just to get through a school year. It’s amazing what you can live off of, but the reality is that was a truly pivotal point.”

​She worked for a lobbyist at the Texas State Capitol in Austin and taught gymnastics to preschool-aged children before graduating with a Bachelor of Science in speech communications. Her first job post-college was as an administrative assistant at Visit Dallas.

“I went on to do other things and then I went back to Visit Dallas as a leader,” Matej says. “What I often tell people is that, if you’re given an opportunity, make sure you make it count. When the door opened, I took that opportunity and walked through
the door,” she says. 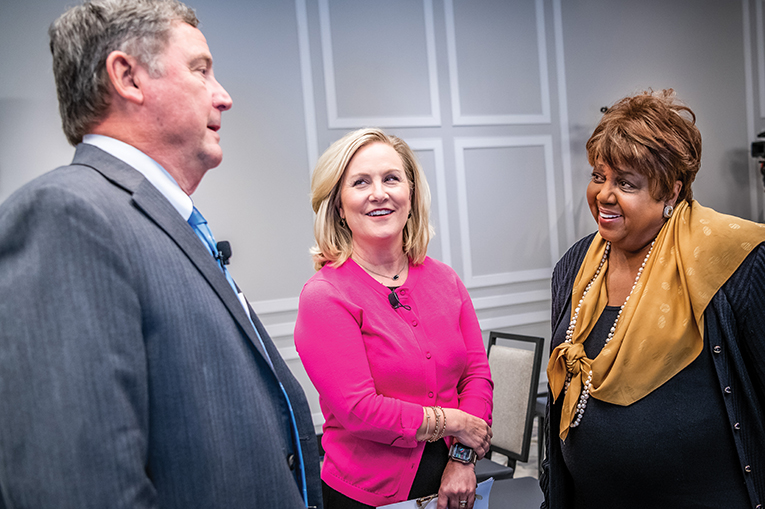 Matej talks with Phil Brown, former CEO of the Greater Orlando Aviation Authority, and Carolyn Fennell, the organization’s Senior Director of Public Affairs, at an event where she was one of the speakers. (ROBERTO GONZALEZ)

“My perspective is to be very engaged in the community and with partnerships that can lead the way to great success,” she says. “Travel and tourism is definitely part of the economic development cycle. Whether you’re at a convention or on a business trip or your leisure vacation, that’s your first introduction to a region. It could lead to moving there or moving your business there, so I’m really excited that we’re going to be working together on a brand that talks holistically about Orlando.”

​Matej attributes her drive, in part, to her birth sign (“I’m not someone who follows [astrological] signs, but I’m a Capricorn through and through,) her dad (“somewhat of a workaholic”), and her grandmother (“a businesswoman who started all over in her 60s … she’s always been that example or mentor, someone I always think about”).

​As a leader, she also works to find balance of sorts in her home life with her husband, who commutes to San Antonio weekly; her son, 11; daughter, 13; and stepdaughters, ages 21 and 25. She says she recently persuaded her mother to follow her to Orlando.

​“Balance, I don’t think, is the right word,” Matej says. “What I do—and I am pretty strict about this—is prioritize. Life is absolutely full. I have a brand-new job that is also a very big job. So, I prioritize. My daughter will have a volleyball game. It’s on my calendar just like a meeting with the mayor would be on my calendar. And it’s not to be touched. So that, to me, is the best way of balancing.”

​Even with limited personal time, she gets in her exercise workouts, and “I like to do the ‘sport of spa-ing,’ a special treat for myself whether it’s a mani or a pedi. But I realized a long time ago that, being a working mom, in light of the old saying ‘It takes a village,’ you’ve got to lose pride around asking for help,” Matej says.

​What she loves about Orlando is the diverse and welcoming nature of the area. “This is such a global destination, not only of people visiting here, but of people who live here. The restaurants—I don’t know of a cuisine you can’t find. And that adds to our quality of life. Orlando International [airport] definitely gives us, as residents, a gateway to the world and then, obviously, we become that gateway city of the U.S,” says Matej, who had first vacationed in Orlando when her children were young.

​As an Orlando resident, Matej makes it a point to visit neighborhoods like Winter Park, Lake Nona, Gotha and others throughout Central Florida. “Every neighborhood has its own personality, and that’s something we continue to integrate into our storytelling about the city. Travelers want to go where the locals go. I’m downtown a lot,” says Matej, who attended Fourth of July events downtown and ran in the November Turkey Trot around Lake Eola.

​After living in Orlando for a year, Matej says she’s excited to have set down roots here and is looking forward to what lies ahead.

​“Sometimes when people come in from the outside, you are truly viewed as an outsider,” she says. “I have been embraced.
I have felt so welcomed, and that says a lot about the community.”