In Focus: The Dreamer

It’s been 33 years since Pat Williams defied the odds and landed an NBA franchise for Orlando. Now he has his sights on a pro baseball team. Impossible? Doubt him at your own peril. 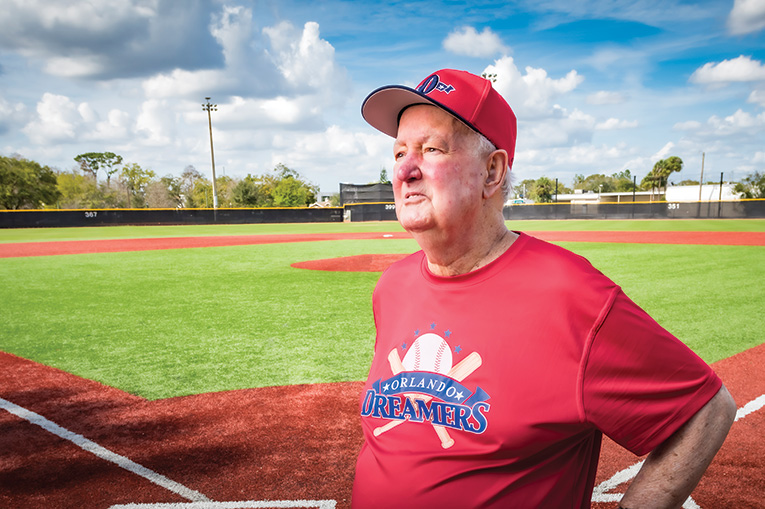 Posing at a Winter Park diamond, Williams looks to the future. (ROBERTO GONZALEZ)

I am riding shotgun as Pat Williams eases his Jeep Grand Cherokee onto Interstate 4. His eyes scan the traffic ahead, but they see a different kind of traffic—the critics and contrarians who say he can’t bring Major League Baseball to Orlando. It is a crisp winter day, and Williams is heading to a plot of land where, if baseball decides to come, Orlando will build it.

A stadium, that is.

“This is the last mountain for me to climb,” he says.

Williams turns 80 in May, and through ongoing cocktails of chemotherapy he has kept multiple myeloma at bay since 2011. He retired as senior vice president of the Orlando Magic last year, ending 51 years as an NBA front office executive, to focus on the Pat Williams Leadership Library that will be a housed at the First Baptist Church of Orlando.

“It was like a light went on,” he says, describing the day several weeks after he retired. He was reading one of the five newspapers he gets at his home and saw that MLB was looking to expand, and that the cities being considered were Portland, Las Vegas, Charlotte, Nashville, Montreal and Vancouver. “My wife will tell you that I yelped. I almost threw the paper down. I was shouting, ‘What about Orlando?! What about Orlando?!’”

Yes, what about Orlando?

If anyone can bring Major League Baseball to Orlando, Pat Williams can. He harkens back to 1985, when Orlando businessman Jimmy Hewitt approached Williams, then the Philadelphia 76ers general manager, and asked him to front an effort to secure an NBA franchise for Central Florida. A year later, in June 1986, the two men held a press conference, announcing their intention to bring a team to Orlando. Mind you, this was mid-1980s Orlando, not the Orlando of today, 35 years of growth down the road. At first, people scoffed and smirked, and then came the stunning announcement in 1987 that Orlando was getting an expansion NBA franchise.

So, yes, Pat Williams has cred.

It is why there was a buzz about Orlando humming at the 2019 Baseball Winter Meetings in San Diego last December, just two weeks after Williams’ press conference at The Tap Room at Orlando’s Dubsdread Golf Course. The immediate thought was this: Could Williams be interested in having the Tampa Bay Rays, who play before often abysmal crowds in the abomination that is Tropicana Field, move to a new state-of-the-art ballpark in Orlando? Answer: A resounding yes.

Fact is, the Rays are the prime focus of Williams’ baseball affection, and the wooing has already begun. Williams, who is operating on his own with a small group of volunteers, has had multiple discussions with Rays’ management—specifically, he says, with Rays president Brian Auld and Rays president of baseball operations Matt Silverman. Because of their contract with the city of St. Petersburg regarding Tropicana Field, the Rays are forbidden from negotiating with any other city. So it was not surprising that after I reached out to both Auld and Silverman, I got a return phone call from a Rays spokesperson telling me they would have no comment.

The Rays’ contract to play their home games at Tropicana Field runs out in 2027. Says Williams, “They tell me they are committed over the next two years to see if playing a split home schedule would work,’’ with half the games in St. Petersburg and half in Montreal. “There is a thought that this might be a trend for the future, that it is difficult for most markets to support 81 home games. So the Rays want two years to see if they can make a split season happen. If not …” 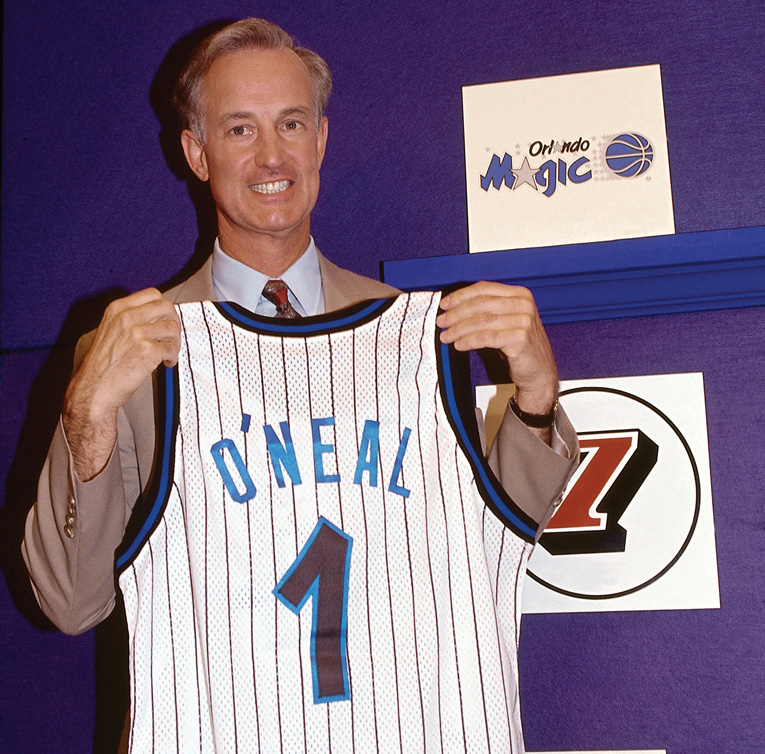 Williams in 1992, after the Magic won the NBA draft lottery and selected Shaquille O’Neal. (COURTESY OF ORLANDO MAGIC)

If not, then the thought is that it takes about five years to build a new stadium. If one can be built on the site Williams is driving his Jeep Grand Cherokee to, then adding the two years the Rays want to pursue the option of playing a split-city schedule to the five years it takes to build a new stadium would put the Rays in Orlando in 2027, the same year the Rays’ lease runs out on Tropicana Field.

Says Williams, “We have decided that our best bet is to move the Rays 88 miles east to Orlando.”

For now, though, Williams is not calling the team the Orlando Rays. Instead he has chosen the name Orlando Dreamers, with the new ballpark he envisions being called Dreamland Field. Importantly, he has a website that he directs people to—OrlandoDreamers.com. He carries business cards featuring the website and doles them out with religious fervor, imploring people to go there and pledge their allegiance. The template is the same that Williams used when he brought the NBA to Orlando—get people to commit to buy into a season ticket plan. As of mid-March, 12,200 had signed up. To be sure nobody has plopped down any money for those tickets. Still, it shows a vibrant, burgeoning interest.

“We were not going any further than Central Florida would allow us,” Williams says. “If there was interest in Major League Baseball in Central Florida we were going to know in a month. Well, a month later we had passed the 10,000 mark. So we said, ‘Central Florida you have spoken and we have heard you. You have now authorized us to go forward.’ ”

Like a carnival barker, Williams rattles off more numbers as he inches his SUV along I-4.

“Walt Disney came here with big dreams,” he says. “So did Arnold Palmer. We have big dreams too. And now two thousand people a week are moving to Orlando with big dreams. That’s 100,000 people a year. Multiply 100,000 by 10 years and that is another million more people. Now figure that last year we got 75 million visitors from around the world. How many will be visiting Central Florida when Dreamland Field opens? Maybe 80 million. Would two percent of 80 million people want to go see a ballgame while they are here? If so, that’s 1.6 million.”

The average MLB team drew about 2.3 million fans in 2019. If the Orlando market could do that, along with another 1.6 million from visitors, that would add up to 3.9 million in attendance. The top team in MLB attendance in 2019 was the Los Angeles Dodgers, who drew 3.9 million fans. Mitigating those figures, though, is the fact that 80 million tourists won’t all be visiting Central Florida only during the time when a local MLB team is playing its 81 home games.

Still, the numbers of Central Floridians who have committed themselves on orlandodreamer.com is impressive. Every so often, when the website ticks up with more of those commitments, Williams calls MLB commissioner Rob Manfred’s office and leaves them the latest tally.

But those are not the only numbers he has. 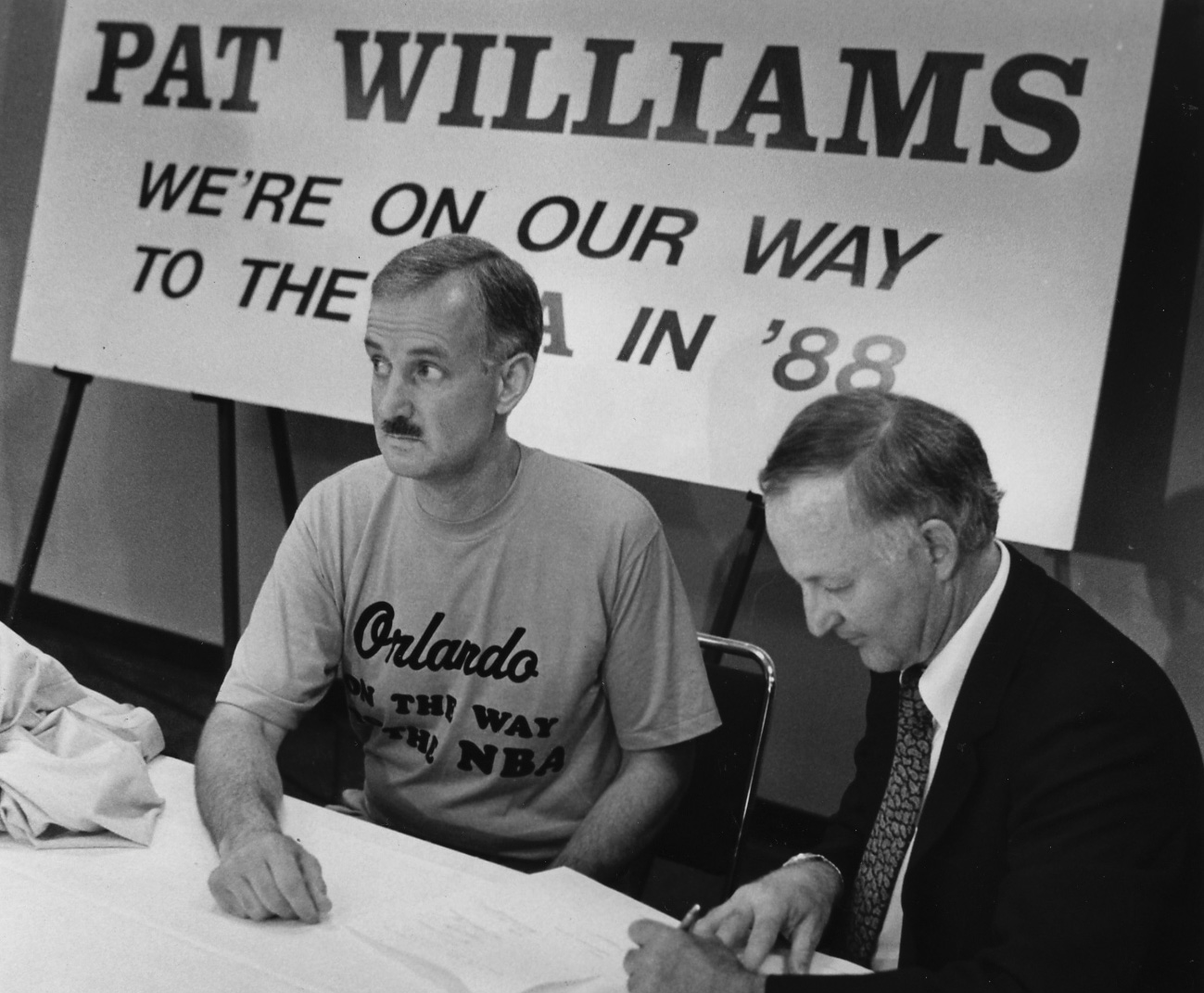 Williams and businessman Jimmy Hewitt (right) secured an NBA franchise for Orlando in the late 1980s. (COURTESY OF ORLANDO MAGIC)

His figures, according to Nielsen rankings, are accurate.

One thing I notice with Williams is that he doesn’t refer to the Rays with the word Tampa. He doesn’t even say Tampa Bay. It’s always St. Pete. “That’s because it’s where they play—St. Pete,” he says. “And St. Pete has been a disaster. St. Pete is a tiny little market, with a ballpark pinched in at the southernmost part of the city. Tampa looks down its nose at St. Pete. They are not sister cities. I call them hissing cousins. One thing I know we are going to need to do is convince Major League Baseball that we are not Miami and we are not St. Pete.”

We arrive at a patch of land south of S.R. 528, outside of metro Orlando, in the tourist hub butting up against the theme parks. Williams pulls his SUV onto a dirt road with a “Do Not Enter” sign and continues to drive deeper into undeveloped land. As he does, his enthusiasm revs into overdrive. He points here, points there, sharing the map in his mind of his vision for Dreamland Field—a place with innovative ideas designed to bring fans for the entire day, instead of just for the ballgame. It poses another hurdle. He sees the money coming from Orange County’s tourism tax. Other than the Convention Center, that money in the past has gone for venues in metro Orlando—such as the Amway Center, the Dr. Phillips Center for the Performing Arts, and Camping World Stadium. Getting support to build a baseball venue outside of metro Orlando will likely get pushback. “But we looked all around the city,” Williams says. “We looked and looked and looked, and there is no land to do something like this. It takes about 30 acres, and there is nothing like that in metro Orlando.”

There have already been discussions with Orange County Mayor Jerry Demings, the man who controls the purse strings. A phone call to Demings got an email response. “I have met with Pat Williams, he shared the vision with me, and I remain cautiously optimistic about the realization of that vision in the near term,” the email said, adding, “I’d love to see it happen and I know it doesn’t come without its challenges. It would require likely a private/public partnership, with the stadium being built by the ownership group. It would be my belief that it would only work financially for the ownership group if the stadium had a multipurpose use and if it were located in the tourism corridor.”

All of this has Williams energized. He keeps a notepad beside his bed so he can jot down fresh ideas. He is hearing from former MLB players who live in Central Florida, as well as some wealthy people who would be interested in owning an MLB team in Central Florida. “This is pure fun,” he says. “Pure fun and pure creativity. I wake up in the middle of the night all the time now, with new ideas, and I think, ‘Where did that come from?’ ”

Driving back east on I-4, I ask Williams why this is his last mountain to climb. I know he is 79. I know he has held off multiple myeloma going on 10 years. But there is a palpable energy emanating from him that is undeniable. So why?

He smiles, his eyes twinkling.

“Maybe it isn’t my last mountain,” he says. “How about the NFL to Orlando?”

This article appears in the April 2020 issue of Orlando Magazine.
Categories: News and Features
Tags: baseball, Basketball, dreamers, league, Magic, major, nba, Orlando, pat, williams
Want to read the whole issue? Download and read this issue and others on Magzter.