The healing has just begun. 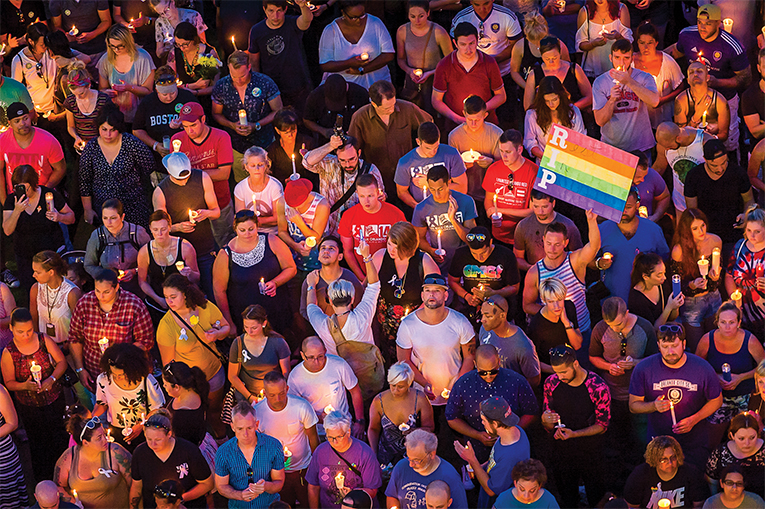 The day after the Pulse shooting, in a moment of collective grief, 10,000 gathered to show their unity at Dr. Phillips Center for the Performing Arts. (ROBERTO GONZALEZ)

As we approach the sixth anniversary of the Pulse massacre, the struggle to heal in the shooting’s aftermath continues for the community and families. Orlando remains a community in mourning, the psychological wounds from the event still close to the surface.

“The 49 people we lost will always be so important,” explains Dr. George Wallace, LGBT+ Center (the Center) executive director, and CEO. “But I think the family members and survivors still struggling with the aftermath need our attention. I would love to see the focus on the survivors of the tragedy.”

Dr. Wallace says that the healing process isn’t one-size-fits-all. “It’s not like you’re going to heal in six years or ten years, and you’ll be okay. Healing is different for every single person. With our programming in mental health, we don’t say, ‘It’s been five years. You need to get over it.’ Sadly, that’s something we hear in the community.”

According to a study by the National Institute of Mental Health (NIMH), survivors with post-traumatic stress disorder (PTSD) vary in their healing process. Some recover within six months, while others have symptoms lasting much longer. In some people, the condition becomes chronic.

Appointed Executive Director and CEO of LGBT+ Center in 2017, Dr. Wallace has been an outspoken advocate for mental health and support services for the LGBT plus community, Pulse survivors, and their families.

“Our mission is to support the LGBTQ community and its allies. So often, those allies are forgotten. Allies are so crucial to our mission, so that’s what the little plus is for.” 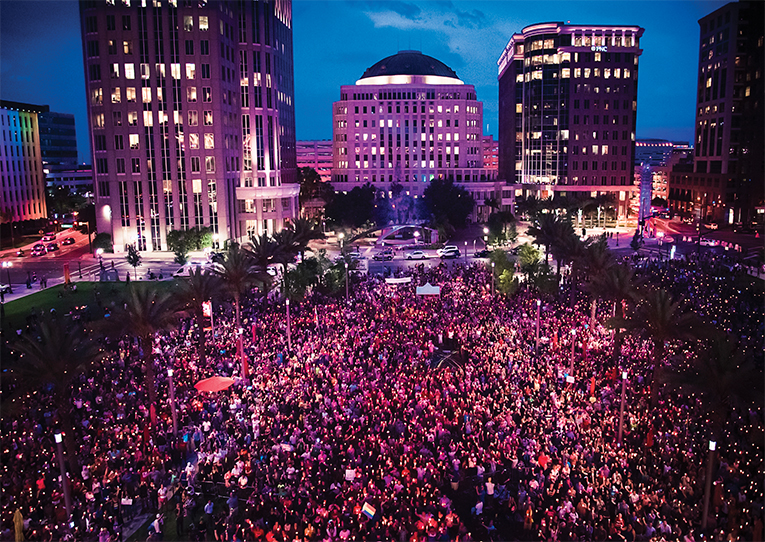 Orlando City Hall was the backdrop as thousands gathered to honor the victims. (ROBERTO GONZALEZ)

One Step Forward, Two Steps Back

While the Orlando community has provided overwhelming support to the victims of the Pulse massacre and their families, the fight for financial support has had its share of challenges and setbacks. “It’s been one step forward, two steps back,” says Wallace.

On June 25th, 2021, President Biden signed a memorial bill to recognize the victims of the 2016 Pulse nightclub shooting. “May a president never have to sign another monument like this,” Biden said.
In June of 2021, Gov. Ron DeSantis vetoed funds to provide counseling for Pulse nightclub shooting survivors, despite a $9.5 billion budget reserves.

“Last year, the House and Senate both approved a $150,000 appropriation for our program Orlando United Assistance Center (OUAC), to provide ongoing case management and mental health services,” explains Wallace. “It passed, and on June 2nd, when it got to the governor’s desk, he vetoed it. It was a line-item veto, so he took the funding away.”

And the explanation? “There wasn’t one,” says Wallace.

While Dr. Wallace is correct, Governor DeSantis didn’t issue a comment regarding the line-item veto, his Press Secretary, Christina Pushaw did release this statement:

“Governor DeSantis has been a champion on mental health since day one – and he absolutely supports each and every Floridian who has experienced such horrific trauma, which has a lifelong impact on survivors. To this end, the Florida Leads budget that Governor DeSantis signed today includes a historic increase for community-based mental health services, to ensure that all Floridians in need – including LGBTQ Floridians – are able to access vital support and resources.”

Where there is a will, there is a way. “When the governor vetoed the funding, we had Jerry Wright, one of the 49 people who lost their lives. His parents stepped forward and did a PSA for us. They matched dollar for dollar, up to $25,000.”

The Wright family’s generosity snowballed into an avalanche of support for The Center, with the United Way and other businesses stepping up to help.

The Center made the best of a challenging situation and miraculously expanded services. “The budget cut was $150,000, and we ended up getting just a little more than that 150,000 and a lot of media attention.”

“It’s a battle, and we still see people coming to us for basic needs, but I’m also seeing some people come out of the program and flourish.”

“We always say, ‘Pre-Pulse and post-Pulse,’” explains Wallace. “Orlando is so unique, and it’s a bubble. We’re fortunate to live in a community that continues to say that we won’t let hate win.”
Wallace says that several important organizations were born out of the Pulse tragedy. “There are organizations that came out of that because it shed light on a gap in services for the Latin X community and the queer community.”

Over the past 40 years, the Center has been a leader in the fight. “The Pulse massacre has put us in a spotlight that we’ve never had before, for better or worse. The community has rallied, and they continue to rally.”

The onePulse foundation is dedicated to the support of a memorial for the Pulse victims. The owner of the Pulse nightclub established the foundation to create a sanctuary of hope following the tragic day in American history, Sunday, June 12th, 2016, to honor the 49 angels that were taken, the 68 injured, and the countless first responders and healthcare professionals who treated them.

The Orlando United Assistance Center, which the Center manages, helps connect those affected by the Pulse tragedy with an array of free or low-cost community resources for mental health counseling.
“The Pulse tragedy could happen to anyone. People were in the wrong place, wrong time, and some people at the club were not gay. We must serve all, and we don’t turn anyone away.” 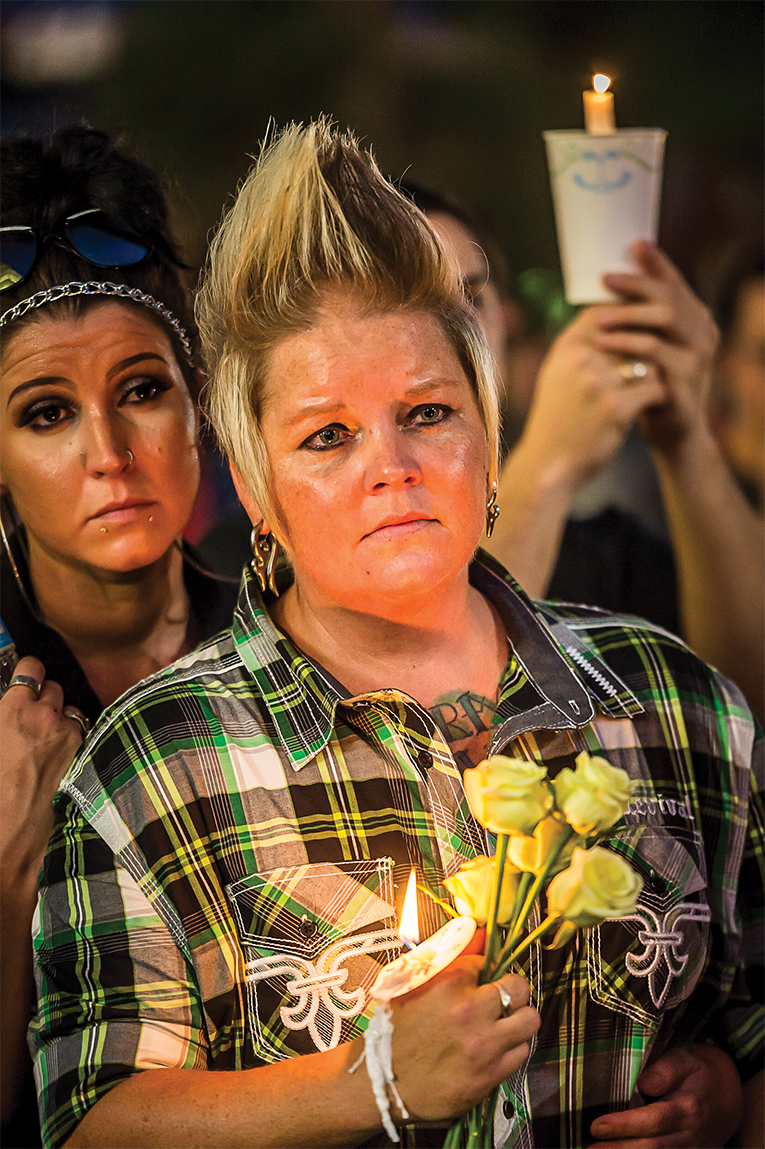 As the Orlando community continues to heal post-Pulse, the focus is on education, recovery, and a fight for legal rights. These horrific events will continue until we address the foundation of socialized bigotry, prejudice, and gun violence.

While Florida is embroiled in the “Don’t Say Gay” debate, Wallace feels that it’s essential not to take everyday rights for granted. “We have to talk about the Equality Act and what that would mean for Floridians because it would mean federal protection. Our rights are not special rights, but basic human rights. I want to rent an apartment and not fear that my landlord finds out I’m gay, that I’m going to be homeless. We still have so much work to do.”

“I want the community to know that healing is a process. When you have experienced trauma and feel you need someone to talk to, we’re here. We’re a safe space. You can be your authentic self and not feel that you’re going to be judged, no matter what.”

This article appears in the June 2022 issue of Orlando Magazine.
Categories: Lifestyle
Tags: pulse
Want to read the whole issue? Download and read this issue and others on Magzter.