For years, Sheila Sablain took supplies to homeless encampments. Now the nonprofit she helped found is set to bring more services to those in need. 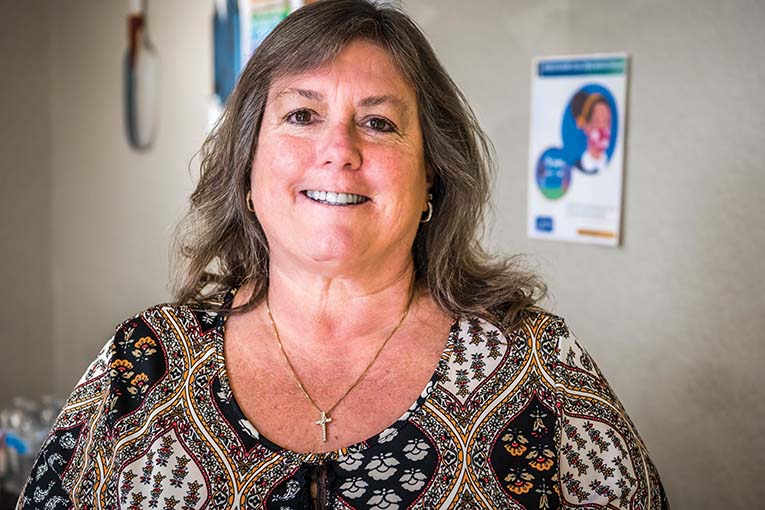 Most of us avert our eyes when we encounter homeless people on the streets. Sheila Sablain of Orlando couldn’t do that. Not only could she not look away, she couldn’t stay away. Instead, she collected and delivered food and necessities to their camps, often at night, sometimes with her children in tow.

“After you build relationships [with the homeless] and you know they’re not going to hurt you, the kids get curious,” Sablain says. Her children started going with her and built their own relationships, adds the mother of five, who helped found the nonprofit Samaritan Resource Center in Bithlo in 2010 and serves as its operations director.

Sablain began reaching out to the homeless more than 35 years ago as a stay-at-home mom. She would—and still does—solicit donations to help those who are homeless, sometimes paying for needs out of her own pocket. “Anywhere I go, I ask,” she says. “People are willing to give if they know where to give instead of just handing out money.”

Sablain’s reach has expanded dramatically over the years. A small but growing organization, Samaritan Resource Center served 912 clients and provided 35,310 services in 2020. The center has seven staff members and 60 volunteers. A recent AdventHealth grant will allow the purchase of the adjacent building, where clients will get training in computer and job skills. It will also provide a site for addiction-recovery meetings.

Case managers help clients apply for and receive identification—a critical need for many of the homeless. Clients are given phones and receive help in applying for jobs and finding housing. They also receive food, clothing, haircuts, medical care, mental health counseling and legal assistance. Meanwhile, the center acts as a hub for mail, a place to take showers and a safe place to interact with friends.

Partnerships are vital, according to Zeynep Portway, appointed executive director last June. They allow the center to draw upon the expertise of organizations such as Shepherd’s Hope medical clinic and CareerSource Central Florida. “Community partners are how we’re going to grow and get to that next level,” she says.

The statistics take on life when hearing clients’ stories. One man, Kevin, has been homeless for several months. “It’s food and a shower every day,” he says of the SRC. He also is receiving help with job placement. His free phone increases the likelihood of his ability to get a job, he says. Once clients have jobs, they can get on the path to permanent housing.

But a job isn’t always forthcoming or lasting. The center’s newsletter shares the story of Aaron, a client who lost his job once his employer found out he was homeless. “People get caught in that Catch-22 all the time,” Portway says. “Once you’ve lost your job, it’s hard to get back to where you were. It has a way of steamrolling.”

About 7,270 Central Floridians were homeless as of last November, according to the Homeless Services Network of Central Florida, with Orange County accounting for about half the total.

Sablain counts mental illness and addiction as the major roadblocks to a safe and better life for her clients, explaining that they perpetuate homelessness.

“Mental health is such an issue for our clients,” she says, adding, “Most are addicted.” The COVID-19 pandemic has only intensified isolation and stress among the homeless, notes Portway.

Some in the homeless community don’t want to give up their way of life, as hard as it is. “Some people choose to live this way,” notes case manager Harry Chadderton. “It’s a terrible way to live, in my opinion, but they’re free to make that choice.”

Chadderton, a retiree, says he began working at SRC in part to open his eyes to the truth about the homeless population. “It’s terrible for the folks who are homeless. They have no way of protecting any belongings. They live on a dirt floor in a wooded area with people just walking through.”

Progress is incremental, measured by one life at a time. Portway recalls a client for whom the staff worked to receive unemployment back pay. In gratitude, he showed generosity. “He came back and made a donation because he had gotten his money. We get clients helping each other out,” she says. 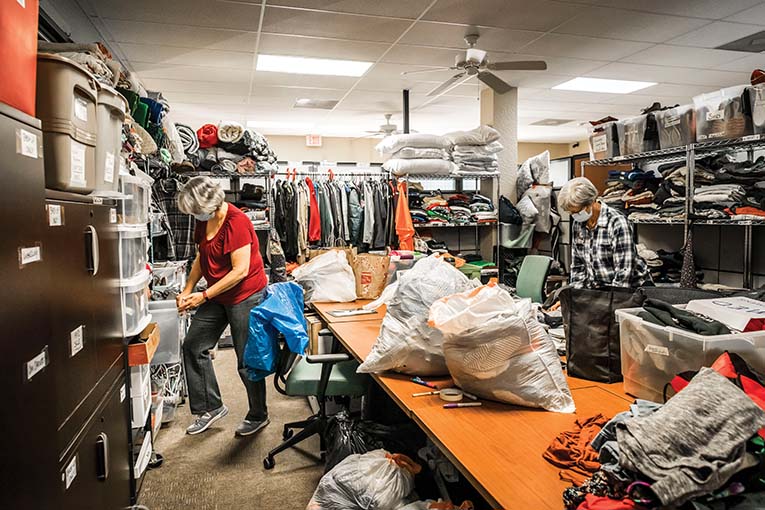 The workers treasure every victory. “Since October, we’ve housed four clients through different partnerships, and two more are almost ready for housing,” Sablain says. “You think, ‘That’s only six,’ but that’s six people who are now out of the woods and have a place to stay where they can sleep in a bed at night.”

Tracy Barkman serves as the team’s rapid rehousing case manager. She describes her job—helping people get on the path to self-sufficiency through budgeting and housing—as the best in the world. “When people are placed, they cry tears of joy. The opportunity we’ve provided them is unlike anything they ever thought they would have,” she says.

Barkman and her fellow staffers end each client meeting with prayer, a practice Sablain ingrained in the nonprofit’s DNA. “I want each person to know somebody cares for them,” Sablain says.

As SRC prepares to grow, Portway hopes to build on the foundation Sablain and others established using professional case managers so they can “take SRC from a point of transactional case management to transformational. We want to create case plans and have goals.

But Portway recognizes even those efforts won’t solve the greater problem. “It’s going to take more affordable housing—tiny homes, turning old hotels into efficiencies,” she says. “We have a lot of people out there saying, ‘I can afford $500 a month,’ but it’s almost impossible to find [suitable housing] for $500 a month. Anything innovative will help,” she adds.

Compassion also is a missing piece of the puzzle, Sablain says. “If you see someone sitting on the ground, just say, ‘Hey, how are you doing?’ You don’t have to give them money. Just talk to them. Help them understand they are a person.”