In Focus: An Ode to the Old West

Past meets future in more ways than one as Opera Orlando stages a vintage gold-rush saga at Cheyenne Saloon on Church Street. 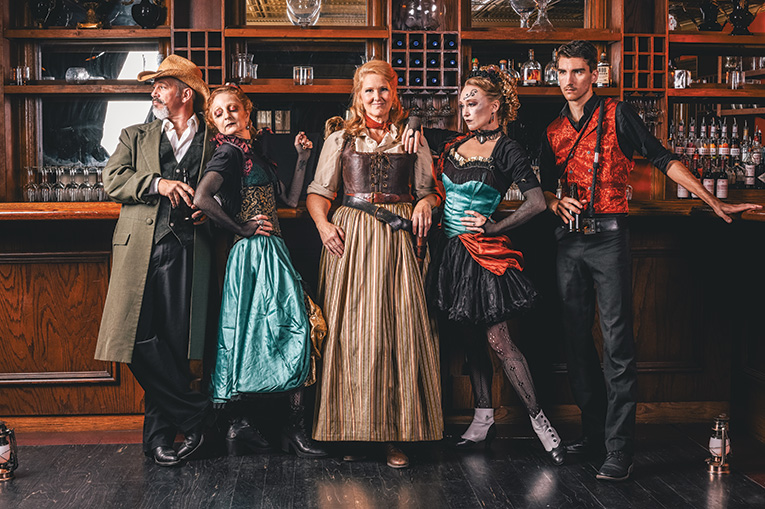 Quick: Name the first widely successful spaghetti western. Bonus round: Name its star. If you’re a film fan, pop-culture buff, late-night movie freak or just a quick-draw with that smart phone, you probably came up with Clint Eastwood and A Fistful of Dollars.

If you’re an opera devotee, you know better.

Long before Eastwood was cast as a flinty-eyed anti-hero in a mid-’60s shoot-’em-up that was filmed overseas and on the cheap by soon-to-be-legendary director Sergio Leone, another visionary Italian had already staked his claim as the first to cross-pollinate European sensibilities with the mystique of the American West. His name was Giacomo Puccini.

As the flamboyant composer of Madama Butterfly, La Boheme and other powerhouse operas, Puccini was already acclaimed on both sides of the Atlantic when he arrived in New York City in 1907, saw a stage melodrama called The Girl of the Golden West about the romance between a repentant outlaw and a gun-toting heroine named Minnie who runs a gold-rush saloon, and decided to use its plot as the basis of an opera.

Such was the mustachioed composer’s celebrity clout that when the English-language version of Puccini’s opera made its New York premiere three years later, ticket prices doubled, Arturo Toscanini conducted, Enrico Caruso sang the male lead, and high-society surnames ranging from Guggenheim to Juilliard peppered the audience. And at Puccini’s insistence, a team of five horses clomped across the Metropolitan Opera stage as part of the extravaganza’s rustic pageantry.

No clomping will be seen or heard in the Feb. 7 and Feb. 9 Opera Orlando production of a work Puccini claimed was his greatest achievement. Nor, for that matter, will there be a traditional stage to be clomped upon. In a page out of the distant and not-so-distant past, The Girl of the Golden West will be presented at the Cheyenne Saloon on Church Street in downtown Orlando as one of the opera company’s site-specific “Opera on the Town” productions.

That historic venue—whose full name, appropriately enough, is the Cheyenne Saloon and Opera House—was one of the original anchors of Church Street Station, the 1970s-1980s entertainment district developed by visionary entrepreneur Bob Snow that incorporated vintage architectural elements salvaged from all over the country. As the crown jewel of the project, it’s a dance-hall showplace of three-story grandeur, with a stained glass ceiling, 19th century chandeliers, a balcony accessed by a grand double staircase and five repurposed antique bars.

In its boisterous late-night heyday, the venue featured performances by the likes of Garth Brooks, Tanya Tucker and the Allman Brothers. But over the years the complex itself lost ground to theme park entertainment strips that emulated the concept. The properties broke up, changed hands, and underwent multiple redevelopment efforts—including the latest incarnation, which revolves around Lincoln Properties’ Church Street Plaza, a 28-story hotel and office high rise that will soon be accompanied by a 32-story office, hotel and parking garage. Plans call for the Cheyenne Saloon to be preserved and incorporated into the complex.

This is the second Opera on the Town production for the company. A site-specific production of The Barber of Seville at the historic Casa Feliz in Winter Park sold out last year as part of a banner year that saw the four-year-old company generate a hefty $1 million in revenue altogether.

To fill the void created by the financial collapse of Orlando Opera, which filed for bankruptcy and disbanded in 2009, Opera Orlando has re-established ties with local opera fans and donors who were disillusioned by that company’s sudden collapse. The company also has presented pared-down operas instead of big-budget affairs, and broadened its audience base with outreach programs for students and Fringe Festival shows.

“We have to be inventive to survive,” says Opera Orlando’s executive and artistic director, Gabriel Preisser. “There are so many entertainment options in this town that we have to work hard to stay relevant, particularly if we want to appeal to a younger audience.” 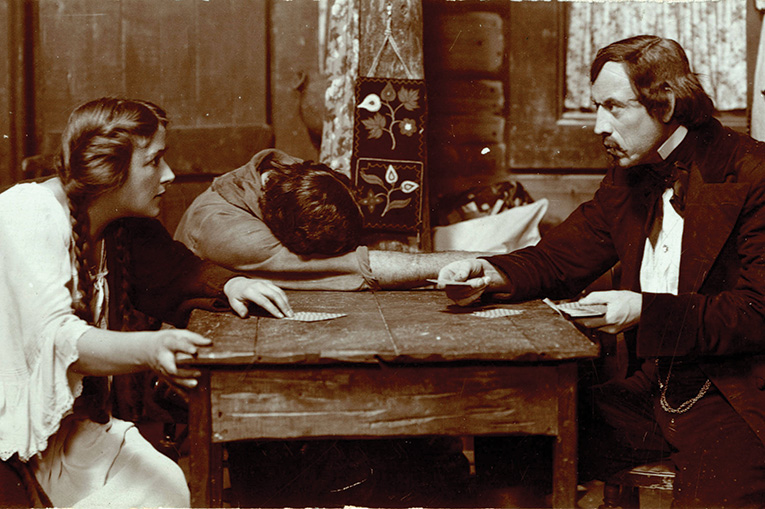 The Girl of the Golden West on Broadway, 1905. (WIKIMEDIA COMMONS)

To that end, The Girl of the Golden West will be something of a moveable feast. Patrons will be treated to drinks and light snacks in an affair that will start out with the first act in the Cheyenne Saloon and move across Church Street to Ceviche Tapas Bar & Restaurant for the second, with the audience trucking back to Cheyenne for the finale.

Phantasmagoria, an Orlando steampunk/Victorian-themed performance troupe, will do a pre-show routine and fill in during the opera as phantasmagoric supernumeraries. Soprano Amy Cofield will perform the part of Minnie, the virtuous barkeep; tenor Ben Gulley will appear as Dick Johnson, the noble outlaw. The players will be accompanied by a piano, violin and bass ensemble, and the opera will be performed in English. That’s partly because there’s no way of installing a projection system ordinarily used to provide a translation of the lyrics above the stage – and partly because, no matter how ethereal the singer or the song, it’s hard to keep the sour-note clunk out of linguistic mix-and-match lyrics such as Addio, Dick Johnson!, Ti Voglio bene (I love you) Minnie!, and my favorite: “Whiskey per tutti!”

Puccini’s wild west fascination dated back to 1890, when he was dazzled by Buffalo Bill Cody’s globetrotting show—starring Annie Oakley, Calamity Jane, Sitting Bull, a mini-herd of buffaloes and featuring re-eenactments of everything from a stagecoach robbery to Custer’s last stand—on one of its European tours. The Girl of the Golden West would give the composer the chance to channel his excitement.

There’s a charged, celebratory sense of grittiness, guts, wide-open spaces and the open-air, unfettered gunslinger adventure of it all in Puccini’s wild-frontier tribute, which could have served as a stirring soundtrack for Buffalo Bill’s wild and wooly rawhide spectacle. Or as Preisser puts it:  “Listening to this opera, you can practically hear angry spurs scraping across the barroom floor before a shootout.”

Rather than focusing on mythical, overly romanticized characters and show-stopping arias, Puccini was intent on music woven tightly into the action of down-to-earth characters in realistic setting and situations.

He found a like-minded ally in David Belasco, the playwright who penned the original The Girl of the Golden West melodrama. As New York’s most influential producer-playwright of that era, Belasco worked with show business luminaries ranging from D.W. Griffith and Cecil B. DeMille to Lillian Gish, Mary Pickford and Helen Hayes.

Puccini was his most distinguished collaborator. Belasco had already written and produced a play that served as the inspiration for Madama Butterfly by the time he conceived the gold-rush drama, which would go on to inspire two silent movies and two talkies­— one of the latter being a corny, 1938 affair that included lines such as “Why didn’t you tell me in Montenegro you wanted to polka?” and featured Nelson Eddy and Jeanette MacDonald in the lead roles, with Orlando’s own Buddy Ebsen as a supporting player.

Belasco had drawn on stories he remembered hearing from his parents, who were gold rush emigres themselves and had a few Wild West tales of their own to tell. One of them, a story his father told him about tracking down a wounded fugitive whose hiding spot in a loft was betrayed by blood dripping down to the floor below, made its way into Puccini’s opera.

Though it hasn’t been produced as often as Puccini’s other classic works, there’s an aspect of The Girl of the Golden West that some scholars point to as being both influential and presciently modern: Its heroine is a self-sufficient survivor.

Once she sang her piece, a girl in an opera didn’t have a lot of convenient exit strategies to avail herself of, back in the day. The drop-down menu pretty much consisted of being murdered, going insane or committing suicide—just ask Carmen, Tosca, Madama Butterfly, Aida. So head down to Church Street and raise a brava! for Minnie, multitasking matron and cowgirl extraordinaire, who runs a respectable business, wins at high stakes poker, knows how to handle a gun, teaches the boys Bible verses in her spare time, saves her sweetie from a lynch mob—and makes it out of an opera alive.

Opera Orlando will present The Girl of the Golden West at 7:30 p.m. Feb. 7 and at 2 p.m. Feb. 9 at the Cheyenne Saloon and the Ceviche Ballroom. Tickets:
operaorlando.org

This article appears in the February 2020 issue of Orlando Magazine.
Categories: Performing Arts
Tags: old-west, opera, Opera Orlando, western
Want to read the whole issue? Download and read this issue and others on Magzter.

The Best Shampoos for Hair Loss in Females