With Donald Rupe at the helm of the Renaissance Theatre Company, a rising tide lifts all boats. 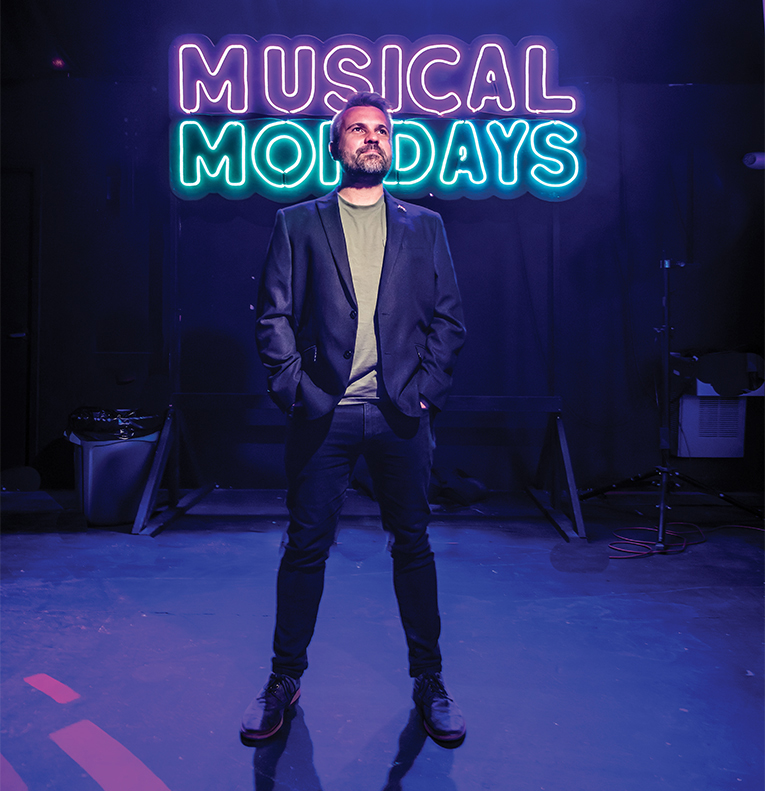 The Arts Alive scholarship committee in Osceola County was holding its annual college scholarship auditions. It was a long night of listening to candidate after candidate, and Donald Rupe, a senior in high school at the time, was a no-show, much to the chagrin of his music teacher and mentor, Debbie Fahmie. She knew Donald had an excellent chance to win this scholarship. She knew that without the financial support, he wouldn’t have the opportunity to attend college.“I’m sitting there, waiting, and Donald’s not there; he’s not showing up for his audition. I kept making excuses, putting him at the end of the audition schedule,” recalls Debbie. “Finally, I realized he wasn’t coming and discovered he was working at Walmart.”

For many, this would be that pivotal moment in the story, of an opportunity lost, but not for Donald Rupe. You see, he has an angel in his pocket, several in fact. Debbie did what any good angel would do. She asked for a break and then drove to Walmart with a friend.

Debbie worked his shift while her friend drove him to the audition. “He didn’t have much left of his shift, thank God,” she laughs.

And the audition? “Donald went, and he nailed it. And you know, with all the challenges he has been dealt in his life, he’s always had this little guardian angel. He doesn’t have his music with him because he didn’t even realize he could get to the audition. The accompanist said, ‘You know, I think I have that song in my car. Let me check.’ It turns out the accompanist had the song. Donald nailed the audition, and he got the scholarship.”

“We want to do everything the right way,” he says. “Theater artists in general, but specifically in Orlando, are not taken care of financially, so that became one of the first goals. It’s a lesson I’ve learned in previous jobs, where I would make a fourth of the amount of money as the next person above me while carrying exorbitant work on my shoulders.”

“Donald is an interesting character,” Bekah Lugo says with a laugh. “Because he decides that something will happen, and it happens.”

“He sees that something is missing or isn’t being done and wants to fix it. He makes up his mind and then he just does it.”

After 20 years of friendship, Bekah describes the experience of knowing Donald as “just magical. He’s charismatic and attracts the right people to get things done.”

While doing theater in high school, and after becoming frustrated with not getting parts in shows, Donald created his own theater company. “We called it ‘Nothing Productions,’” says Bekah. “Donald started directing in high school and did things like helping direct state festivals, people’s monologues, and our group musical number; he just took charge of things. I think that tail-spun him into Renaissance Theatre.”

“He understands that his brain doesn’t work the same way as other people, and he’s become good about over-communication, what he’s looking for and what he wants. When he was younger, when we were kids, we didn’t know what the heck we were doing. It’s been fun to watch him become such a visionary and a good human being.” 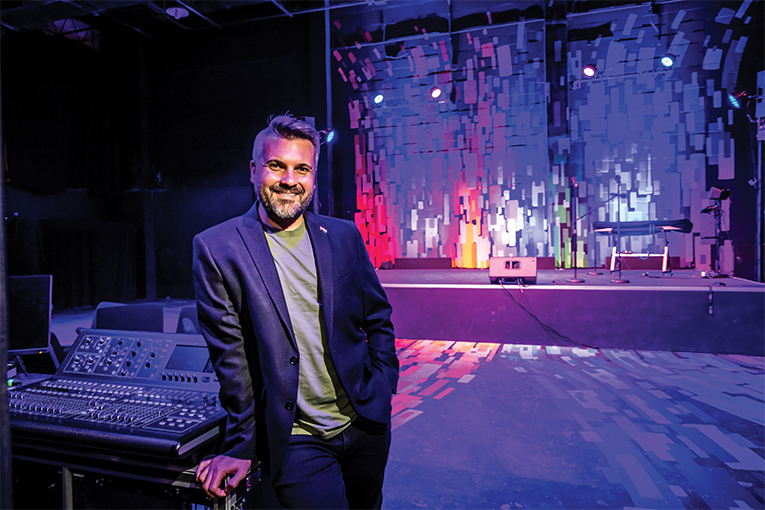 This “good human being” is what Debbie Fahmie saw when a second-grade Donald Rupe sat at her feet in music class.

“Donald would sit on the floor in front of me while I took attendance with these big eyes, looking right up at me. He loved music so much and was eager to be in the music classroom.”

Donald wanted to participate in all of Ms. Fahmie’s performing groups, but there was a problem. All the groups met before school, and Donald rode the bus. “He would do everything in his power to get to school before school started because he couldn’t take the bus. Donald had a very challenging childhood, and his determination and passion stole my heart.”

To attend rehearsals, Donald’s father would drop him off at Debbie’s house between 4:30 and 5:00 a.m. and sleep on her couch. “I kind of grew up with her kids.”

Debbie was looking forward to placing Donald in an all-county chorus event, but Donald had moved to another school. “This is a special event where we pick out the top ten musicians, but he moved around a lot. I tracked him down because he was still in the county and contacted his current music teacher, and I said, ‘Listen, I’ll give up one of my spots, but you have got to let Donald be in all-county.’”

Donald wasn’t aware he had an angel looking out for him. “I went to eight different elementary schools in five years, and she always found out which school I was going to. She’d call the music teacher, and they would make sure I stayed involved in chorus and in music, one way or another. I didn’t know this until later, but it was interesting that I would get what I thought was earned preferential treatment everywhere I would go,” says Donald with a laugh. “I’d always get a solo or a part, but it turns out it was because Debbie was following me, making sure that I got those opportunities.”

It was Debbie that inspired Donald to become an educator. “It’s because of her that my first desire was to be a teacher myself, and I ended up teaching theater for seven years in the high school I attended in Osceola County. She was the county administrator for Fine Arts by that point, so she was my boss.”

Donald would still be a teacher today if it weren’t for what he calls “a happy accident.”

“I was a teacher and thought I’d be doing that forever. I was quite good at it, which is why I could have probably kept doing it.”

After years of directing shows for community theater and a job at Central Florida Community Arts, Donald discovered his love for writing. “At some point, I started writing my own shows. I had written this show called ‘From Here’, which is a musical. It’s about a lot of things, but one of them was in response to the shooting at Pulse nightclub, where I spent a lot of time in my formative years.”

At this point in the story, it should come as no surprise that the funding for this play came from a grant that Debbie Fahmie provided through her job in the county. To top it off, Donald took the play to New York City.
“I promise, the payoff of this story is worth it,” laughs Donald.

One of Donald’s friends at CFCArts played the drums, so he was asked to join the production. “We didn’t know each other very well, and he kept offering to pay for his trip to New York. I had fundraised to bring this musical to New York for the festival, and Debbie created a group called ‘Team Donald’ which raised all of this money for us to go to New York for a week.”

Donald’s friend, Chris Kampmeier, kept offering to pay for himself, but Donald insisted, “I said no, you’re coming to play for my show. I’m going to pay for your trip.”

Donald learned a vital lesson in New York. “We had an incredible experience. I learned so much. I learned how easy it is to do theater once you know how to do it. It wasn’t much harder there than it is here, and in some ways, it was easier because more people want to see it.”

When the group returned from New York, Chris sat Donald down for a talk. “He said, ‘I don’t know how to say this, but I have a lot of money. I made a lot of money in my previous job and would love to support what you do.’ Honestly, I didn’t believe him at first.”

It took some convincing, but eventually, the decision was made to bring “From Here” to off-Broadway with Chris as the angel or benefactor.

Chris was house hunting, and he sent a link to Donald. It was an advertisement for this building. As a joke, he said, “We can’t go to New York right now. How would you like to start a theater instead?”

At first, Donald didn’t know whether to believe his friend. “Every step of the way, I wondered if he was serious. But we looked at the building, and I said, ‘Honestly, if you wanted to start a new theater in Orlando, you would not find a better space.’ And so we kept getting in over our heads, and before we knew it, he had purchased this building, and we had started Renaissance Theatre Company.”

They say that luck is what happens when preparation meets opportunity. Opportunities are all around us, but it takes a special person whose “brain doesn’t work the same way as other people” to embrace each opportunity as it comes along.

“I use Donald as testimony when I’m trying to advocate for the power of the arts. He was set up to go in the wrong direction in so many ways; to get in with a gang; to do drugs,” says Debbie with emotion. “Instead, he turned his life into this creative, wholesome life. Because he lost all of his family, he’s created one of the tightest knit families surrounding him that there is.”

Debbie Fahmie, Bekah Lugo, Debbie’s son Christopher Fahmie and Chris Kampmeier, all sit on the Board of Directors of the Renaissance Theatre Company. After all, a wise man keeps his angels in his pocket.

After Hours: Laugh Out Loud