In Focus: A Voice That Unites Generations

Monica May, radio host and communicator extraordinaire, offers hope and direction as she seeks to empower moms, daughters and the community. 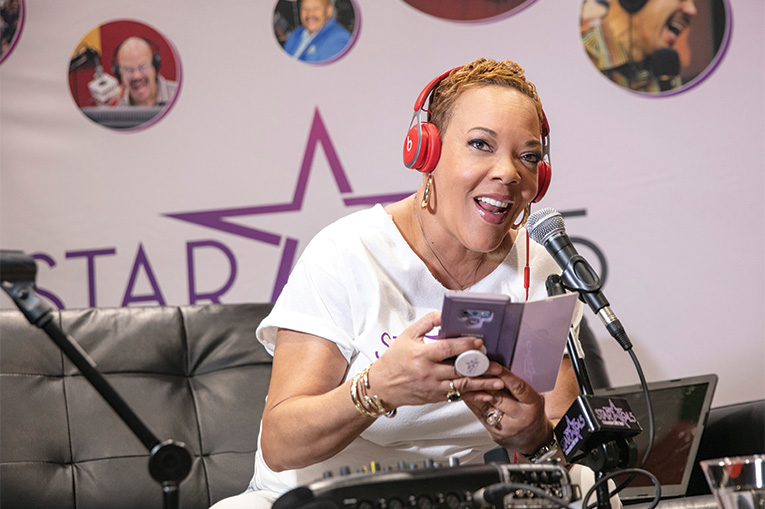 May on the air at the Tom Joyner Reunion. “I put my mouth where my heart is entrusted,” she says.

It’s the kickoff to Labor Day weekend, when most Central Floridians are boarding windows or buying last-minute supplies in preparation for Hurricane Dorian. But the 17th annual Tom Joyner Family Reunion at the Gaylord Palms Resort & Convention Center is abuzz with about 25,000 attendees, some of whom make their way to hear STAR 94.5 morning drive time host Monica May give the lowdown on college tips.

May’s warm baritone simultaneously commands attention and connotes authority as she directs her gaze at the high school students in the audience. “You all have what it takes, right?” she says to resounding cheers. She then shares about her family’s initial lack of support for her radio career. Her message is one of empowerment tempered with respect. “We have to honor our parents,” she says, “but in the end, it’s up to you.”

For May, communication is key to community, and it all begins with families. So she uses her voice, whether to provide talk and news over the airwaves, to lobby for a cause, to share college information with the largely minority families attending the Tom Joyner expo, or to help families find healing through conversations. Her efforts led readers to rank her as the area’s top community leader in Orlando magazine’s annual Best of ORL voting in August. 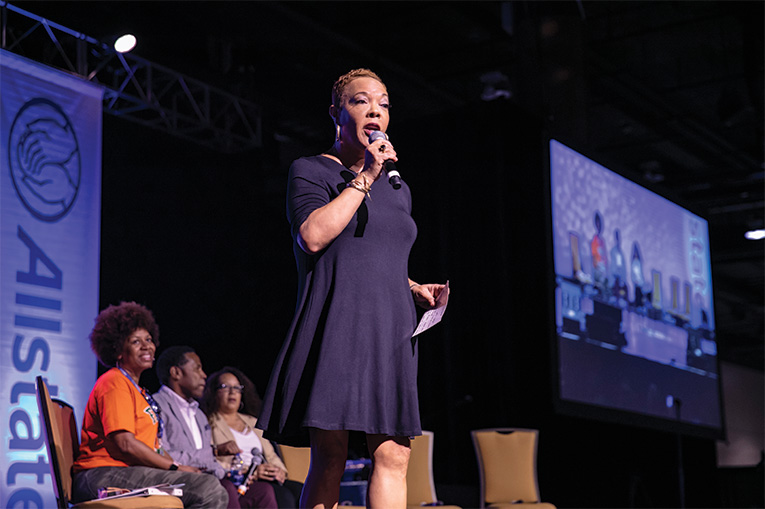 May offers college tips to high school students at the Joyner event: “We have to honor our parents,” she says, “but in the end, it’s up to you.”

Jason Gregory, marketing manager for the reunion, named for nationally syndicated radio host Joyner, calls May “the voice for and of our community in times of uncertainty and vulnerability as well as in joy and celebration. She is the mother that we listen to for direction and hope.”

May’s presence is ubiquitous. She was there to help Orlando families through the transition when historic Richmond Heights Elementary School closed after a half-century in 2013. She partnered with Desmond Meade to promote passage of Amendment 4, granting ex-felons the right to vote in Florida, in 2018. She has led workshops on dressing for success, college and career readiness, self-esteem and team building. She serves with the YMCA of Central Florida’s Teen Achievers Program and Valencia College’s Black Advisory Council. In mid-September, she moderated a debate for Orlando mayoral candidates.

“I put my mouth where my heart is entrusted, and I listen to God on things He feels are important,” she says.

A 40-year radio veteran, May joined the 94.5 FM staff as news/community affairs director in 2006. In her role, she leads the STAR Cares Initiative, which awards $1,000 a month to “to a person or a nonprofit cause that we deem could really use our assistance. That is actually what brought me back here,’’ says May, who has spent about 25 years of her career in Orlando, as well as stints including Atlanta and New Orleans. “I didn’t want another job in radio. I excel at community partnerships.”

The Harlem native also organizes annual back-to-school drives and other events, such as Take a Loved One to the Doctor Day, which offers free health screenings to residents of Osceola, Orange and Seminole counties. Immediately after the Tom Joyner reunion, May converted a previously scheduled concert at the House of Blues into a Bahamas fundraiser, bringing in tons of relief supplies for the hurricane-battered island nation.

The community affairs job has been a perfect fit for May, who had led a $4 million fundraising campaign for a transitional living center for Houston’s homeless. She also had worked for years with young people and families, which formed the foundation for the 2013 launch of her nonprofit, Let’s Spill the Tea (letsspillthetea.org).

Then one evening in 2002, May was leading her first retreat as a youth pastor at St. John’s United Methodist Church in Houston. “God interrupted me and said, ‘Where’s that letter?’ I said, ‘Do you mean THAT letter?’ ” May’s 13-year-old daughter, Monique, was in the audience. “So I asked somebody to bring her down front and sit next to her, because I said, ‘What I’m about to say is going to rock her world.’ And it did. But it had an effect on the entire group. The church was rocking side to side with emotion.”

Monique May, a speech pathologist with Orange County Public Schools, remembers that day vividly. “I remember telling her, ‘I loved you before, but I love you even more because now I know more about you and your past, not only as a mom but as a woman,’ ” she recalls. The lessons she learned from her mother that night helped her navigate her own challenges as a young adult.

As May saw the impact that communication had on relationships between mothers and daughters, her nonprofit was born. “I listen to God a lot, and He gave me this vision of a discussion centered around tea. I knew nothing about tea. But tea also means truth. ‘Tea’ is the term the kids use to say, ‘I’ve got the scoop on somebody.’ Our grandmothers used to sit on the porch and sip iced tea and talk smack about neighbors. So I said, ‘What if I had mothers and daughters be able to sit down and over tea, tell their truths?’

“I developed a slogan that said, ‘Moms, your truth can save your daughter’s life.’ If you would share some of the things you experienced as a young girl, you could make yourself more relatable,” May says.

Several times a year, including at the Tom Joyner reunion, May holds her Let’s Spill the Tea events. She provides conversation starters for moms and their daughters ages 14 to 21, keeps a mental health counselor on site, and offers resources for additional help. A spinoff called Ties and Tea helps fathers connect with their daughters.

Single mom Citoia Greenwood of Orlando sought out May’s help in 2013, when Greenwood’s fifth-grade daughter was getting bullied. “From there, we had some challenges,” Greenwood recalls. “She got into middle school and started running with the wrong crowd.” Mother and daughter attended their first tea in 2014 and followed up with counseling. “Now I’m going through Stage 4 cancer. Our relationship has grown so much. She’s there for me,” Greenwood says.

In early September, May and her daughter released Let’s Spill the Tea: A 21-Day Mother Daughter Journal. The book—a combination of what Monique May calls “inspiring quotes, thought-provoking questions and poetry”—is based on discussion topics used at the teas. As mothers and daughters respond honestly and anonymously to prompts, they’re able “to find that common thread” that opens up communication, Monique May says.

As for Monica May, who’s now a grandmother to 13 on husband George’s side, she says she’ll continue using her voice and talents to give back. “I’ve learned to embrace whatever it is that is you, be it good or bad. Everybody can make a difference with whatever that gift is. Wouldn’t it be sad to go to your grave without giving or gifting the world with what He created you to do? I couldn’t imagine that.” Chances are excellent she won’t have to.

This article appears in the November 2019 issue of Orlando Magazine.
Categories: Community
Tags: Community, host, may, media, monica, monica may, Orlando, Radio, tom joyner
Want to read the whole issue? Download and read this issue and others on Magzter.