Site Staff,
Q: What are the odds of picking a perfect bracket during NCAA basketball’s March Madness tournament?

A: Investor Warren Buffett and Quicken Loans made news recently when they offered $1 billion to anyone who could pull off the feat. Their money is probably safe: The odds of picking all 63 games correctly are 9 quintillion to 1. That’s 9 followed by 18 zeroes, aka 2 to the 63rd power. 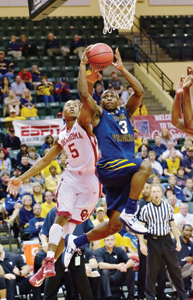 But wait—those odds apply if you’re totally clueless about basketball and basically flip a coin. What if you’re armed with the fact that a No. 16 has never beaten a No. 1 in men’s basketball? That’s four games that are sure bets, so now you’ve improved your chances to one in several hundred quadrillion. Or better yet, what if you could somehow pick the first 32 games correctly? Then, says Mark Johnson, professor of statistics at UCF, your chances improve to…

So don’t quit your day job. As Johnson points out, once you get past those first 32 games of the NCAA tourney, the picks actually get tougher. “The skill levels are less apparent as you move on,’’ he says, “so that as the teams deliberately seeded apart get close to each other, then a perfect bracket is even less likely, and it’s starting to look like 50-50.’’

In other words, at that point, flipping a coin might not be a bad idea.

Johnson says he’s never done particularly well at the bracket game. But he offers this advice: Go mostly with the favorites but have at least two long shots in the mix. “It really boils down to ‘Can I pick the oddball?’ ’’

Probably not. Answer Man prefers to stick with more easily attainable goals, like winning the Powerball jackpot. Those odds are only 175 million to 1.

Q: What’s the story with all the orange bikes popping up around Orlando?

A: They are a promotional campaign for Orangetheory Fitness, a Fort Lauderdale-based health club that just opened four locations locally, on East Colonial Drive in Orlando, and in Winter Park, Waterford Lakes and Lake Mary. The bikes have been spray-painted orange, then placed at various locations, including in front of businesses that have given their permission.

Orangetheory’s workout consist of an hour-long class that involves a combination of treadmill, rowing and strength-training. A bike is also an option, but don’t worry: The workout bikes are of the stationary variety and not the decorative orange clunkers parked around town.

This article appears in the March 2014 issue of Orlando Magazine.
Categories: Community