A unique, drought-tolerant garden design draws praise from the neighborhood and passersby.

You hear it all the time—that the right landscaping can boost your home’s curb appeal. Many homeowners consider it an afterthought, eventually opting for a few shrubs, one or two well-placed trees, and some annuals for color. But Tom and Marie Shumilak made landscaping their front yard a priority, although their vision was years in the making.

The couple bought their modest 1930s modernist-style home, located in downtown Orlando’s Delaney Park neighborhood, in 1996. “The house looked pretty much like it does today. The yard, though, was very traditional with grass and mulch,” says Shumilak, a creative director for Disney. “Marie and I love design and working outdoors.” Both enthusiastic amateur gardeners, they wanted an eco-friendly, drought-tolerant yard with a distinctive style befitting their home. 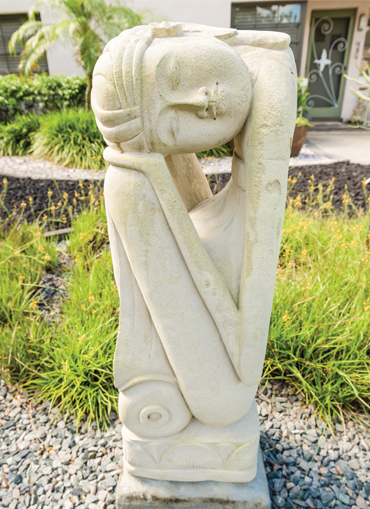 They began by widening the driveway and giving it a more aesthetically pleasing look with custom-made pavers of shell and concrete. Next, they dug out all the turf. “We were nervous at first,” Shumilak says. “We didn’t know if our neighbors would be okay with us ripping out all the grass.” But no one seemed to mind, and they moved forward with the project.

The inspiration for the new “sod” came from the couple’s travels to Hawaii and the volcanic terrain of the islands. “When I saw the charcoal gray of the dirt against the house, I decided to use black lava rock” juxtaposed with white stone, says Shumilak. He spent months experimenting with design ideas for the front yard until one day he simply drew a big circle—the shape of the main garden. Plantings include various palms,  a lot of succulents and other fleshy plants, and a few cacti. 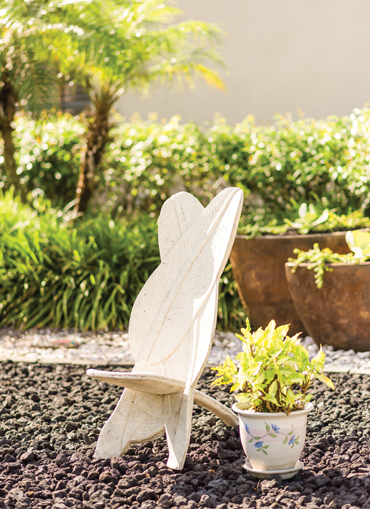 It wasn’t until a shopping trip to Bali, though, that the garden would get its conversation piece. While traveling, Shumilak knew he wanted a concrete or wooden statue for the front yard. “One of our stops in Gianyar had giant concrete statues 20-feet tall—a lot of Buddhas and Hindu gods,” but nothing seemed quite right. “I was thinking of something that would fit our house, more 1930s-style. I’m super picky because I’m a designer,” he says. “At the last second, my wife found this statue—it was the right size, it was almost like an allegorical figure. It’s made of hand-carved stone on the island of Bali.” They shipped the statue back to the States, but it was months before it arrived. “It took so long. It was an exercise in patience,” says Shumilak. “So, we named it Patience. I love that she’s relaxing; she’s not stressed.”

Another decorative piece that sits in the front yard—and complements Patience—is a small concrete chair with an art deco palm frond design. It was a gift from Marie’s mother, who has since passed away. “So the chair has special meaning for us,” Shumilak says.

Today, people stop and comment on their yard. “They ask who designed it, and they ask about Patience. Our neighbor likes to say that Patience is the goddess of the street.”