What others cover up, architect Ryan Young reveals in his family’s Audubon Park home that is an ode to modern living.

Hasn’t everyone driven through a neighborhood and said, at least once, “I have always loved that house,” without ever having stepped inside? That’s how Ryan and Julia Young’s story began, but their love affair with what would eventually become their family home began with an odd-shaped piece of land at 1600 Lakeside in Audubon Park, one of Orlando’s emerging neighborhoods comprising one-of-a-kind homes, lakes and locally owned businesses, anchored by one of the city’s crown jewels, Harry P. Leu Gardens.

The couple had been driving the area, always looking at houses, admiring and dreaming; envisioning the home they would grow into with their two young boys. “The first house we built was in a transitional neighborhood. We were looking for a location that was more family oriented, with better schools and pointing toward our growing Orlando culture and everything that is starting to bubble up,” says Young, whose wife, Julia, is the executive director of Urban Think Foundation and the founder of Page 15, a youth literary arts program.

“We broke the cardinal rule not to become emotionally attached [to a lot or a house] before the deal is done,” says Young, a commercial architect whose company Interstruct is known for exposing, not hiding, industrial materials and has brought the likes of downtown watering holes North Quarter Tavern and Sideshow to Orlando. “Julia and I wanted to build on that lot so badly.”

So, while the months-long courtship with the seller unspooled, Young worked through hours of discussion with the Orange County zoning department to determine the setbacks of the unconventional, pie-shaped piece of land with a broad curve at its front. Or would that be the side? “Most people would have looked at it and wondered if they could even put a house on the lot,” says Young. Eventually, both the city and architect agreed on a Cubist-fantasy footprint for the site, filled with right angles and jogs from which Young would design a modern house from the outside in.

The couple broke ground in fall 2011 and moved into the 4,000-square-foot house one year later. Bold lines and exposed industrial materials are softened with warm colors and a thoughtful landscape design that supports the Youngs’ goal of creating a family home that is also a modern-living oasis.

“We moved into the space very early,” says Young, “so I got a better feel for living here” as the finishing work evolved. An architect’s home is never complete, and the Lakeside house might be described as a design lab or playroom for Young, whose passion for finding and showcasing the beauty of materials seemingly has no limits. When talking about the project, the phrases “I played with,” and “I wanted to see what would happen if” come up a lot.

The house, with its opposing shed-style sloped rooflines and collage of exterior materials including Hardie board, Fry Reglet architectural metal, corrugated metal siding panels and stucco, is seated on the upslope of a cul-de-sac, across the street from waterfront homes on Lake Rowena, directly beside Leu Gardens.

Approaching the site, you’re greeted by a pair of towering steel mesh sculptures artfully placed at the apex of the lot, playing off the angles of the house. Late-day sun casts a golden light on the King & Queen (the tallest of the pair) by Florida artist Chris Scala. “I knew I wanted to do something on this end of the lot to capture the natural curves of the site,” says Young. The artworks also hint at his guiding design principle: truth in materials.

The variety of textures, the repetition of lines, shapes and materials used in the project—which encompasses every inch of the site —is breathtaking, even pulse-quickening.

For instance, take the pathway from the curb to the front door. Limestone-colored pavers lead to and then jog from a rectangular intersection framed by Cor-Ten, a type of corrosion-resistant steel that develops a beautiful reddish patina, which is filled in with flagstones and pebbles. The ground-flush frame mimics its counterpart around an oversized window that figures prominently on the home’s façade. Michael Eagle of Orlando’s Eagle Metal Works fabricated both frames. “Many people don’t know that we have such amazing, creative folks here in Orlando who do these things,” says Young.

The elevated front porch is a smooth concrete platform, bordered by a thick concrete boardwalk supported by a visible steel beam connecting the front porch to the side porch, the family’s primary entry as it is nearest the driveway and detached garage.

“The boardwalk is actually made from industrial concrete stair treads,” explains Young. “I loved the idea of concrete slabs that appeared to be floating.” The look is of custom-cast concrete, which would have been very expensive, but these are standard industrial materials used in a residential application. “I found a local company that casts the stair treads in a couple of sizes,” Young says. The smooth frame of each rough tread is polished smooth, blending into the surface of the porches.

Small agaves fill in along the boardwalk. “The steel beam beneath the boardwalk shows when the plants aren’t filled out,” says Young. “Seeing the thickness of the edge of the pieces on the boardwalk was important.” 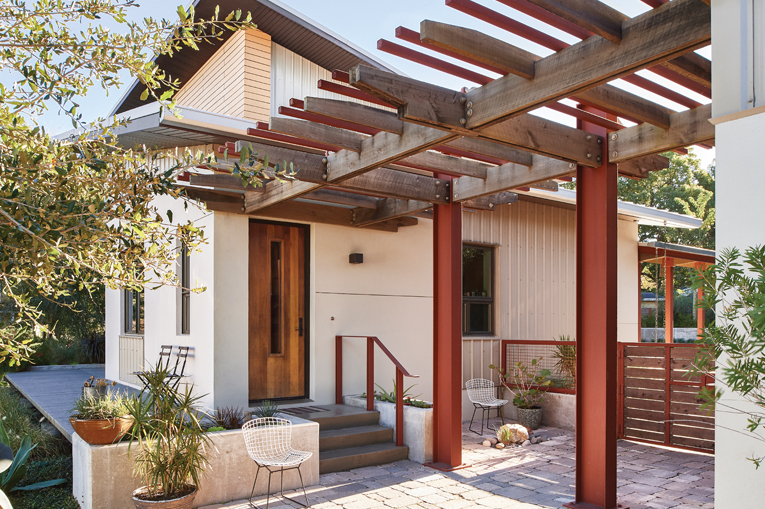 The courtyard bridges the gap between the garage and the house.

The courtyard between the garage and the house is another fixed point at which several design components intersect. “My project was to play with exposed material,” says Young, who explained how the substantial steel beam columns in the pergola are the same exposed beams used indoors that support the second floor. “I repeated them vertically in the courtyard, as well as in the sun shade in the backyard.”

The heavy beams are bolted to the ground, supporting an array of Florida cypress harvested and milled by a Sanford company. No two pieces are alike. “I wanted to play with how the pieces fit together and where they are bolted,” Young says. The effect is both grounding and airy, the overhead geometry an artist’s rendition of Pick-Up Sticks.

The sound of gurgling water softens the space. A concrete trough whose texture mimics coquina is a nod to the original coquina columns that were found on the site.  The fountain defines an edge of the courtyard, above it a vertical garden whose riot of succulents are contained by a custom Cor-Ten steel frame by Drew McGuckin of McGuckin Custom Metal Creations, who also brought several more of Young’s design ideas to life. Cast concrete planters blend with the porch, merging hardscape and landscape components into a singular moment.

“People come by and look,” says Young. “It’s a good conversation starter with neighbors. This is one of my wife’s favorite spaces.”

Julia’s other favorites, according to her husband, are each off the kitchen. One is the back porch—an unscreened 15’ x 20’ room that overlooks the pool and a large runway of green space—and the other is the analog room, just off the kitchen and filled with books, games and a piano painted a buttery yellow.

“It’s where we go after dinner with a glass of wine,” Young says. “Julia plays the piano, the boys play games, or we all play cards. We hang out here a while before everyone disperses, instead of watching TV.”

The most striking note about the interior of the family’s home is the precise balance of modernity and livability: exposed steel beams reveal their inherent beauty, concrete floors polished to a satiny finish beg for bare feet. “We wanted to make our modern living feel warm,” says Young.

“I love polished concrete floors though they are not necessarily a simple thing to do. When done correctly and in a natural way—without using a lot of sealers and chemicals—they feel extremely smooth and silky, making you feel very connected.”

The center of the house soars the full two stories in height, the space articulated by exposed steel crossbeams that actually support the second story. Cherry veneer ceiling panels against a painted black drywall creates depth while the airspace above the sitting area is abstractly filled with a sparse black chandelier that looks something like a desiccated dandelion holding on to its last few seeds.

Adjacent is the breezy iron-and-wood stairwell, its upper tier dominated by the oversized window feature, another of Young’s tricks from his commercial toolbox. “The effect is of a single custom window, but it’s actually a collage of standard-sized windows that are geometrically placed and mulled together, bound by the Cor-Ten frame.”

The boys have claimed the floor space at the base of the stairs, a perfect alcove for transforming canvas and clothespins into a fort. A substantial wooden swing is anchored into the ceiling two stories above. “It speaks to the playful whimsy of being a grown child,” says Young, who found the piece at Peg and Awl—a trove of repurposed treasures—and thought it would be fun for the space.

To either side of the sitting room are the living and dining spaces, each defined with lower ceiling heights and a Florida black cherry-paneled module that seemingly floats overhead and skims a single wall, signaling a defined space on either side of the large central room.

The dining table is as likely to be used for a jigsaw puzzle as it is for dinner. Overlooking one end, an oversized drawing by Sarasota artist Clive King adds color, softness and vitality. “I fell in love with this panel from a triptych when I’d seen an exhibit of King’s work. It’s hand drawn with a Sharpie, and then he goes back and colors it in,” Young explains. The piece is on heavy paper and is framed by the same craftsman who fabricated all the cabinets and millwork in the house. The artwork itself remains unglassed. “It would be a shame if we tried to cover it up,” says Young.

Indeed, the perfect metaphor for the Young family home.