If you’re considering building a pool for the summer season, now is the perfect time to dive in.

If you can’t bear the thought of enduring another sweltering Florida summer without a cool retreat all your own, now is a good time to begin looking at pool contractors and features, with options going to infinity and beyond.

Modern pools come in every shape and size, and push the edge, literally, with dramatic visual effects such as infinity edges and perimeter overflows. Grottos with waterslides, bubblers, water jets, sheer falls, fire pits—even islands with fire pits within water bowls—are just a few of the features clients have available to them. 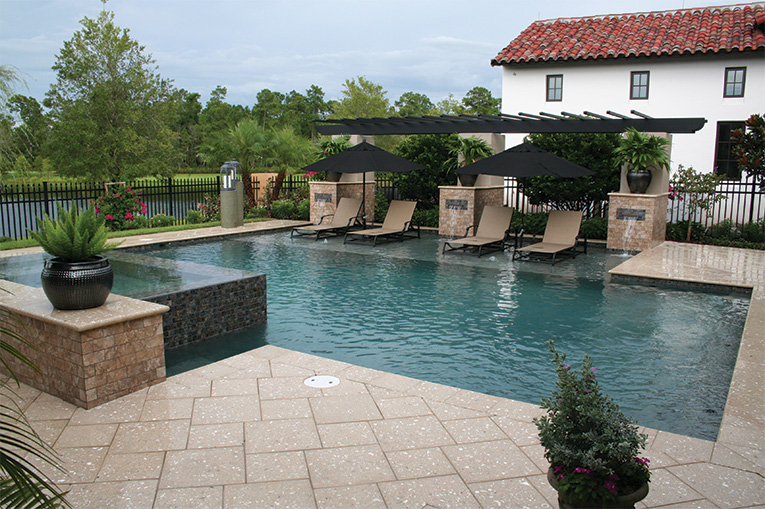 And let’s not forget outdoor cabanas, sun shelves for loungers, programmable LED lighting with color options, and, of course, spas. More mind-boggling still, all features can be operated remotely via an app on your mobile device. The possibilities are only limited by your site and budget.

T.R. McDonald and his wife, Christy, recently completed a lagoon-style pool on their Orlando property. “We thought the kids were at an age when it would be good for them,” says McDonald, father to an 8-year-old girl and a 6-year-old boy. “Between them and our Golden Retriever, we can’t keep them out.”

McDonald’s pool includes kid-friendly features such as two 3-foot-high sheer descents, see-through waterfalls that provide a nook between the water and the pool wall. “They like going behind that, and they like jumping off the side into it,” he says. The pool also has a spa with a waterfall, color-changing LED lights, a seating area with a fire pit, a big-screen TV and tropical landscaping around the 1,500 square feet of travertine deck. His all-in cost, including the furniture and fire pit, came in at $100,000.

“We have a neighborhood with a lot of kids their age. Now this is a main stop,” McDonald says. The pool has also encouraged exercise in a season when many kids don’t want to be outside. “My daughter wants to swim 10 laps every evening. She likes to swim nonstop even if it’s time for bed,” he says.

“Your retired generation wants it simplified. They want deck space for entertaining. They want their daily exercise. When they have young children, they want water features—deck jets and all that fun stuff.”

But even the traditional lap pool can be amped up a notch. Dan Theune, co-owner of Premier Pools of Central Florida, says his company builds a lot of swim systems. “A swim system involves just swimming against current. You can control its resistance. It’s a very popular feature for people who are into fitness,” he says.

Though rectangular pools may always remain the traditional favorite, geometric pools containing a variety of angles and shapes have gained popularity. Freeform or lagoon-style pools also maintain a following. But Theune insists geometric pools are more likely to withstand the test of time. “You want something that’s going to be appealing to more people when you’re selling,” he says.

Jennifer Malagian, co-owner of Signature Pools in Orlando, says design is a personal preference. “Usually the swimming pool is an extension of the home style,” she adds.

Empty nester David Downs of Orlando wanted a place where he and his wife could relax and entertain. Their multilevel 10,000-square-foot deck, made of pavers, slopes down to the lake behind the property, which can be accessed via a staircase. “The spa overflows into the pool. It’s a little bit of a waterfall effect. There’s a bubbler in the spa that makes noise. It’s a very peaceful setting,” Downs says.

Before building a pool, homeowners should do their research. Talk with other pool owners, Malagian says, and look for a company that has been in business for a long time, is financially stable and will honor the warranty.

Eaves recommends reviewing a company’s online presence, researching the state’s database to ensure the company is a valid contractor, and visiting the company’s storefront. “How is that first impression? If they’ve chosen to keep their establishment clean, and it represents the mission behind the company, I would think that would make you feel they would do the same on your job site,” she says.

Downs says having a pool “has changed things” for him and his wife, who enjoy cooling off and having drinks poolside while looking out on the lake. “It’s a big transformation to the yard,” he says.

Before building a pool, experts recommend homeowners identify the features that are important to their family’s lifestyle and then identify what fits into their budget. Signature Pools co-owner Jennifer Malagian recommends putting together “a list of must-haves with some other items for a wish list.”

Think budget and funding. “Homeowners should have secured a financial source if they are financing,” Malagian says. Costs average between $45,000 and $65,000, but they can go up—as in way up—from there. “You can get a $35,000 pool, but that’s a really Plain Jane one,” says Premier Pools of Central Florida co-owner Dan Theune. However, the more elaborate the pool and deck area, the higher the price. “We just sold one for more than $300,000,” he says.

Customers should also prepare for an investment of time. Pool construction takes about 12 weeks, depending on site conditions. According to Malagian, the cost and timeline can be affected by lot access, condition and grade. Builders may have to remove trees and address electrical, plumbing and septic issues.

Homeowners incur further costs through additional features. Summer kitchens can range from $10,000 to $25,000, according to Theune.

“Payback for the cost difference between a variable speed pump versus a standard pool pump is recovered within the first year,” says Theune.

Basic salt systems boost the cost between $700 to $2,000, depending on the pool size. However, according to Theune, “it eliminates a lot of maintenance.”

LED lighting, priced at about $650 per additional light, also saves costs in the long run. “There are LED lights that provide approximately 50 percent energy savings over conventional lights,” says Malagian.

One other potential cost savings is opting for solar panels rather than a heat pump—an option Yannucci recommends. “Solar is free heat,” he says. Both systems cost the same initially—between $4,500 to $6,000—but, he adds, a heat pump will cost an additional $150 to $175 a month in electricity. Of course, there is a tradeoff: “On overcast days or cooler nights, [solar doesn’t provide] constant heat like a heat pump.”