Gabby Othon Lothrop and her husband, who live in Audubon Park, are one of nearly 50 families that originally signed on to the City of Orlando’s urban chicken pilot program, an initiative launched in the spring of 2012 and then expanded last year to allow a maximum of 75 households. The program also upped the chicken limit from three to four. 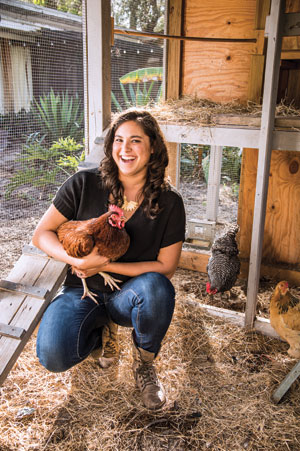 The City of Maitland also started its urban chicken pilot program in late 2013. With a $50 permit, which, like the City of Orlando’s program, requires a training class and site visit, 50 Maitland residents can now house up to four chickens as part of the 18-month pilot.

When it came to construction of their coop, Lothrop admits they went a little overboard. With the help of an architect friend, the couple spent almost a month building the palatial hen house, now 6 x 12 feet and about 6.5 feet high. “My girls are spoiled,” she admits.

Lothrop isn’t the only program participant to splurge on her coop. Colonialtown North resident Lindsay Hodges enlisted the help of a friend to build a $1,200 mini replica of her home that now houses her two chickens, Goat and Cow.

On websites such as backyardchickens.com, backyard coop enthusiasts can share their coop design and building projects. Even Williams-Sonoma has jumped on the bandwagon with options ranging from $300 to $1,500, many including delivery and set-up.

But building the coop requires more than aesthetic flair. Since the program permits hens only (no roosters), homeowners take on the role of protecting the flock from neighborhood predators such as snakes and raccoons. That means burying metal mesh deep underground around the coop and keeping it padlocked at night.

Chickens also need a run so they can roam safely and eat bugs. Hodges says she spends about $25 each month on chicken feed, which she buys at a local feed store such as Palmer. Lothrop gives her flock soy-free feed as well as a gourmet salad tray packed with alfalfa, barley, rye and sunflower seed. “It’s a once-a-month super vitamin treatment I get from Backyard Gardening at the Audubon Park Community Market,” she says.

Hodges drove to a Gainesville farm to buy her two-month-old chicks. Lothrop bought her three 1-year-old heritage hens from a private farm in Apopka and suggests seeking advice about places to buy chickens at the Audubon Market, which is open Monday nights from 6-10 p.m.

You can also buy chicks through mail-order outfits online, but knowing that chickens often don’t lay eggs in their first year persuaded Lothrop to buy her hens fully grown. “We wanted to jump right into the stage where we would start to benefit,” she says.

So far, the pilot program has been considered a success, and Jason Burton, who oversees the program as chief planner with the city planning division, anticipates it will eventually culminate in a citywide ordinance. “We’re trying to show that these are low-intensity pets, no different from having a dog, except that these pets give back food.”And they did; the hens started laying the day after they arrived and have continued to collectively lay about a dozen eggs a week. Even after two years, the time when you can expect to see a decline in production, Lothrop’s hens are still going strong—something she attributes to their happy lifestyle.

Commissioner Patty Sheehan, the pilot program’s staunchest supporter as well as a participant, has been thrilled with the experience. “They’re characters. They love to be held. My girls are happy little hens enjoying their happy little lives,” she says of her hens Peep, Bleep and Cheep. “I would like this to be a citywide ordinance, but it’s not unanimous yet.” She suggests that supporters of the program contact the mayor and members of the City Council to express their interest in permanently passing the ordinance.

In the meantime, the City of Orlando’s pilot program participants like Lothrop, Hodges and Sheehan are enjoying the unexpected benefits of raising urban chickens. They keep the backyard bugs at bay and their droppings are a great organic fertilizer for the garden, but the main allure has been the joy and entertainment they provide as pets. “We find them hilarious, “ says Lothrop. “They have completely enhanced our quality of life.” 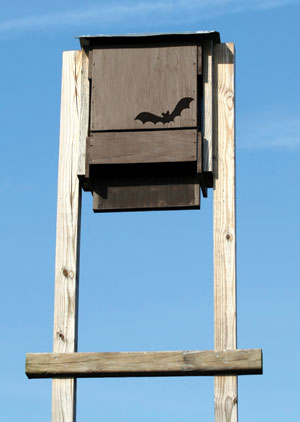 Thanks to a lot of misinformation, bats have earned a bit of a bad rap. For starters, none of Central Florida’s 12 to 14 bat species have ever been known to attack people or pets. They are insectivorous, meaning they eat bugs and, more importantly, mosquitoes. In fact, bats have been known to eat as many as 1,000 mosquitoes a night. In places like South Florida, bats are an important tool for keeping the mosquito population at bay.

If you’re interested in rolling out the bat welcome mat, there are a few steps to consider, starting with a dwelling for the flying mammals. Bat houses can be ordered online, but many homeowners opt for the DIY route. “It’s best to start with plans from the Bat Conservation International website (batcon.org),” says Amy Clifton, executive director of the Florida Bat Conservancy (floridabats.org). “And then it needs to be placed at least 16 feet high in an open space away from trees.” It also helps to be close to a pond or lake because water tends to attract more mosquitoes.

Once the house is installed, Clifton says, it can take up to a year for bats to begin living in their new digs. “You’ll know they’re there because you’ll start seeing their droppings on the ground,” Clifton says. Worried about all those bats swooping around your patio at night? Clifton suggests using yellow bulbs in your outdoor lighting fixtures; they won’t attract bugs—or their bat pursuers.

This article appears in the April 2014 issue of Orlando Home and Garden.
Categories: Gardening