Home for the Holidays

A downtown Orlando home, built four years ago in the classic Arts and Crafts style, gets decked out for the season. 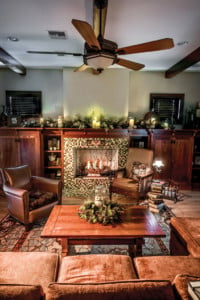 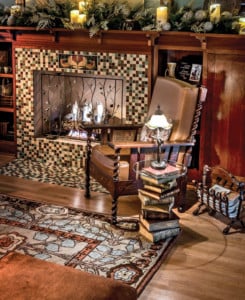 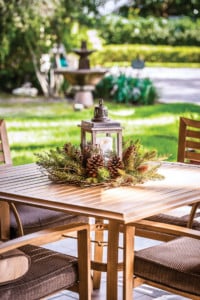 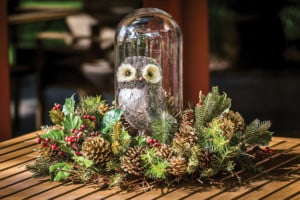 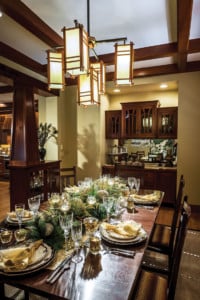 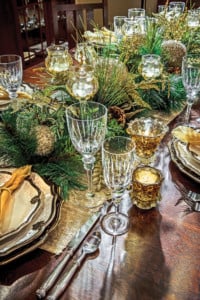 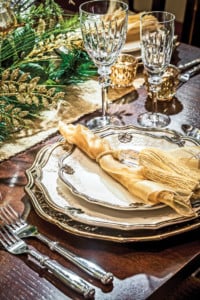 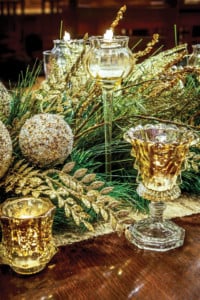 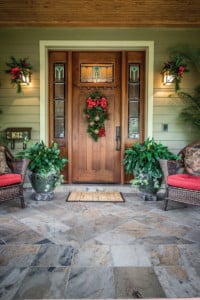 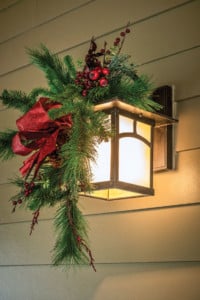 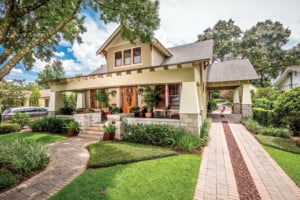 When the holiday season approaches, Vivian and Tom Ward’s Arts and Crafts-style home in downtown Orlando becomes the gathering place for their extended family. “Any time we all get together as a family in our home is pretty special,” says Vivian. “It brings Tom and me tremendous joy.”

Decorating the house kicks off the festive season. A good portion of the home’s cavernous upstairs storage space is devoted to holiday decorations, including two giant Nutcrackers (each more than 4 feet tall) and an ever-expanding collection of unique and handmade ornaments Vivian has amassed over the past 35 years. “I lean to more traditional decorations that blend well with our Arts and Crafts décor,” she says.

For our photo shoot, however, Vivian let us try something a little different. Maureen Girdley, holiday project supervisor for Orlando-based Greenery Productions, created a holiday décor that enhanced the beauty of the home and was right on trend for the 2014 season.

“Neutrals dominate this year,” says Girdley. “Traditional red and green are toned down, while shimmering gold and sparkling platinum reflect the winter landscape at dusk.” She set the dining room table with a sprawling evergreen centerpiece and added red berries and pine cones, as well as glittery gold and platinum globes. Proportionally, the centerpiece worked with the Craftsman-style light fixture. “I didn’t want too much height with the centerpiece because it would crowd the space and fight with the chandelier,” Girdley says. “I juxtaposed the gold and platinum with the evergreen to give it that little bit of sparkle you look for at holiday time.”

Candleholders of differing heights were interspersed throughout the greenery for a multi-dimensional look. “From an artistic point of view, you want depth—you want highs and lows to draw the eye in,” says Girdley.

For the table settings, she used bronze-colored chargers and cream dinnerware with a bronze accent to complement the warm tones of the wooden table and the room’s built-in cabinetry. The dinnerware was Karidesign by Certified International. The Waterford crystal gave the setting an added sparkle and touch of elegance. “The crystal says this is a special dinner,” says Girdley. “To me, the holidays are all about sharing with loved ones and giving them your best.” The gold napkins with tassels completed the look.

Since the living and dining rooms and the kitchen are all open and visible, Girdley chose to keep the décor consistent. She created a spray on the fireplace mantle of larger evergreen boughs with pine cones and red berries. For convenience and safety, though, Girdley switched real candles for flameless Luminaras at varying heights—from 5 to 8 inches. The Luminaras give the effect of a real candle (they are even vanilla-scented), but they’re battery-operated—even by remote control. The effect is a soft glow and added warmth to the room.

A holiday decorating theme that has been popular for several seasons is the use of woodland creatures, especially owls. Here, Girdley has put a decorative owl under glass “to stage him, so he stands out,” she says. An evergreen wreath with pine cones and berries gives the tabletop décor a polished look that can be used indoors or out.

Girdley added a pop of metallic red and gold to the exterior décor. “I chose red because I felt it complemented the home’s wooden front door and soft green exterior paint,” she says. “Most people want some kind of red décor on the outside; it’s traditional.” The evergreen teardrop swag, which incorporated oversized ornaments, and matching greenery over the porch lamps enhanced the woodwork and stained glass insets of the door.

On an outdoor side table, Girdley added a wooden and metal lantern with a flameless Luminara, and added greenery with red berries and pine cones for an understated, natural look.

“Some of the homes I decorate for the holidays are very modern; they mostly have white woodwork and gray furnishings—everything is monochromatic,” says Girdley. “So I have to do some kind of ‘wow’ element to make the decorations stand out. With this house, however, I didn’t need the decorations to overpower its inherent beauty. It required a different, more subtle approach to decorating.”

Building an Arts and Crafts Classic
By Hancel Deaton

Five years ago, Vivian and Tom Ward started thinking about downsizing. They had spent 12 years raising their children in a typical Central Florida Mediterranean-style home in the Dr. Phillips area, but now their youngest was married, and Tom had recently retired. Suddenly, the five-bedroom home seemed too big, so they began contemplating their next life adventure.

“Our oldest daughter and son-in-law were renting downtown and looking for something to buy,” says Vivian. “They saw this house for sale in the Lake Lawsona area, but couldn’t afford it. They mentioned it to Tom, so we looked at it, but it was in pretty bad shape.” They were charmed by the neighborhood, however.

“We loved the location,” Tom says. The high school sweethearts had lived in the suburbs their entire married life in Virginia, Michigan and finally, Florida. “When our kids moved downtown, we’d visit them and it was an entirely different experience—the diversity, the access to everything. We really liked the feel of living downtown.” So they bought the property.

Although they entertained the idea of remodeling the existing house, it proved to be unsalvageable. So they cleared the lot and started from scratch. The first step was to put together a “dream team,” as they call it: Grant Gribble, interior designer; Carlos Posada, homebuilder; and David Runnels, architect.

“We knew nothing about the Arts and Crafts Movement or Craftsman-style houses before we built,” says Tom. “But we wanted a house that would fit in with the neighborhood.” So, the couple walked along the downtown streets looking at other houses. “We would see a lot of these bungalows, and we loved the style,” Vivian adds. So she began researching the design—collecting books, picking up magazines and showing Gribble her favorites.

“Grant was great at finding our likes and dislikes early in the process,” says Vivian. One aspect of the design that initially concerned her was the colorful mosaic tile work surrounding the fireplace. “That was Grant’s idea,” she says. “I’m not a risk-taker; I was worried about the busyness of it.” But she trusted Gribble’s professional opinion and artistic sensibility. The graphic, eye-catching tiles add color to the richness of the wooden built-ins on either side, which Gribble designed.

Although the home incorporates many style elements of an authentic Arts and Crafts home—wide front porch, tapered columns, a partially paned front door and the use of earthy colors—it also has modern comforts such as an open floor plan, glass doors that open onto the back patio, and a farmhouse-style sink.

“We wanted to build a house that had the beauty of the Arts and Crafts style with all the current comforts,” says Tom, a retired engineer. “A lot of authentic Arts and Crafts houses are very closed up. Our house is open and brings in more light. Everything was done with comfort in mind.” He also notes that the scale of the house was driven by the dining room. “We had to have a dining room big enough to accommodate a table that could seat at least 12 people (Vivian, Tom, their 3 children and spouses and grandchildren).” Construction on the house broke ground in January 2010; Vivian and Tom moved in less than a year later, just in time to host Thanksgiving dinner in their new dining room.

Although they originally planned to downsize, this house is only about 100 square feet less than the couple’s previous home. The layout is completely different, however. “Most of the living space is downstairs,” says Tom. “Originally, the whole point of the upstairs was so we could have dormer windows on the front of the house.” It turned out to be fortuitous. When they started construction, Vivian and Tom didn’t have any grandchildren. That soon changed when the first grandchild was born 6 months after they moved in. Now they have three, who have the run of the large upstairs room when they visit.

A stunning aspect of Vivian and Tom’s home is that it mimics the Arts and Crafts style inside and out, top to bottom—from the wallpaper used on the ceiling of the front entry to the patterned living room rug. With Gribble’s help, the couple began collecting furnishings for their new home early on. “Once we realized we liked that style, we began picking up pieces at antique shops and markets,” Vivian says. “It became fun for us.”

There are so many decorative details built into the home that it doesn’t demand much artwork on the walls. One exception is the antique advertising poster in the dining room; Gribble found it in New York City and told them it was a must-have. Vivian and Tom also kept one decorative piece of concrete from the original house, which was incorporated into the wall above the outdoor kitchen grill.

The couple, both in their 50s, built the house as low-maintenance as possible. There is almost no natural wood on the outside; it’s concrete block on the bottom. What looks like wood is actually artificial material made to simulate wood, and could be painted. “We wanted to build the house where it wouldn’t wear us out to maintain it,” says Tom.

Four years after moving in, they still rave about their home. “This is the best house we’ve ever had in terms of a fit and feel for us,” Tom says. And they don’t miss their suburban lifestyle one bit; they know many of their neighbors now. “People in the suburbs live in their backyards,” says Vivian. “Here, people live on their front porch. We’re out there all the time. It’s our favorite ‘room’ of the house.”