At Axum Coffee, Renaut and Brooke van der Riet are serving the world, one cup at a time.

The story of how Howard Schultz turned a sleepy Seattle coffee roaster into a 20,000-store javanaut is legend. A $100,000 investment 22 years ago in the initial public offering of Starbucks, named for the first mate in Melville’s epic novel Moby Dick, would be worth over $10 million today. But that ship has sailed.
This is the story of Renaut van der Riet, the 39-year-old CEO of Axum Coffee, his wife Brooke, 40, and their dream of building a coffee empire at least that grand from which they hope to earn and offer . . . nothing. 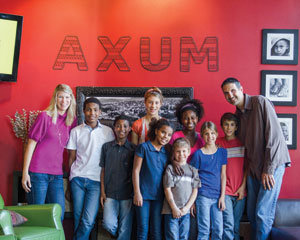 Renaut doesn’t even like coffee. He’s a man on a mission to be a world changer. The son of a top-ranked general in South Africa’s military, Renaut grew up in privilege, but was taught by his father to hate the inequity of apartheid. He experienced, firsthand, the extremes of both wealth and want.

Today, in addition to being a father to his eight children—including four adopted last year from Ethiopia—he is a minister with a thriving flock of more than 1,500 in Oakland, where he preaches under the banner of “Love God. Love People. Serve the World.” His Mosaic Community Church has adopted the village of Axum, Ethiopia, and regularly sends missionaries there. Renaut formed Love Made Visible, a nonprofit that provides humanitarian aid to Axum in the form of education, clean water, health care and orphan care. And his father, the retired general, has personally paid for five other couples to adopt Ethiopian orphans.
Starting the coffee shop was Brooke’s idea. As a  young mother, displaced from friends in Monterey, California, where Renaut had been a youth pastor before coming to Central Florida, she wanted a place to hang out. Renaut, of course, saw the potential for change on a global scale.

Observing that Starbucks, which reported a 2012 operating profit of $519 million, ranked as one of the most generous corporations in the world in charitable giving, he imagined the social good that could be accomplished if a company that size gave away ALL its profits.

If for-profit-but-not-for-personal-gain strikes you as bit odd for a business model, you’re not alone. No landlord near their home in Clermont was willing to risk it—and that was during a real estate-led recession, when shopping center owners were begging for tenants.

But Renaut and Brooke girded themselves with their faith and soldiered on, telling themselves that if Axum Coffee was meant to be, their God would provide a way to make it happen. So when Bert Roper, the late citrus entrepreneur/philanthropist, stepped up to provide prime retail space rent-free for three years, Renaut was grateful, but not surprised.

The couple invested $300,000 in personal savings and money borrowed from friends and family to create the shop, which is not affiliated with the church, except for their common support of Axum, Ethiopia. 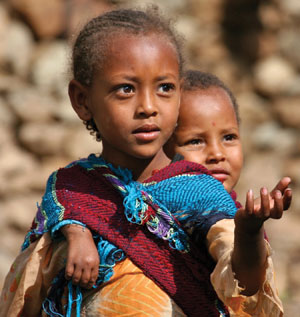 Axum Coffee opened in December 2010 next to the Garden Theatre on Plant Street in downtown Winter Garden. The beautifully appointed shop, next to the West Orange Trail, serves only ethically and sustainably grown “fair trade” coffee, and boasts a wide selection, including special small batches roasted on-site and hand-poured in single servings, at a premium price. A limited selection of desserts, pastries and sandwiches round out the bill of fare. Wi-Fi, a coffeehouse staple, is free.

The store turned its first profit last year and will begin paying rent in November. The profits from one store are barely enough to support a couple of local causes, let alone a village in Ethiopia, but Renaut and Brooke have dipped into their personal savings to support orphans in Axum in the shop’s name since the store opened, and they are already looking for their next location—ideally in Lake Nona or Dr. Phillips—and the one after that, to increase the dividends available for "coffeelanthropy."

Renaut says he’d like to have 10 stores by 2015, a number sufficient to provide fresh water to the village of Axum, with enough left over to help fight hunger and human trafficking. On the horizon, he sees a billion-dollar enterprise to help the world on a large scale. It’s a grand plan that leaves a hard lump in the throats of Suzanne and Mathias Bernal, the dynamic duo of managers tasked with working out the devilish daily details of the van der Riets’ coffee kingdom to come.

“There will be more stores, I’m sure of it,” Suzanne says, exchanging a tentative look with Mathias. “But I want to make sure we’re ready. It was a year and a half after we opened this place before the display case arrived.”

Renaut acknowledges the truth of what the Bernals are saying.

“I’m a dreamer; risky, unreliable, and probably diagnosably ADD,” he says. “I don’t finish stuff. That’s just the dark side of my coin. But I was blessed with a father who taught me to surround myself with people who are nothing like me, people like my wife, who has this incredible ability to take the things I start and make them happen. As a result, most of my dreams come true.”

With four biological children at home, all under the age of 14, neither Brooke nor Renaut went to Ethiopia thinking about adding to their brood. But that was before they met the little girl in the green dress. Four years old and tragically beautiful, the girl at an Axum orphanage captivated them both to the point that they discussed the possibility of adoption that night.

Once they prayed on it, they were committed. And nothing—not even that the little girl was not an orphan or that she had three siblings and they came as a set—could change their minds. The girl, Rahel, and her siblings (the oldest was 14) had been placed in the care of the village because her parents couldn’t afford to feed them. Renaut and Brooke adopted all four.

That’s the trouble with world-changing. It’s hard to know where to draw the line.
Renaut takes all this in stride. He’ll be the first to admit that his home life is utter chaos, with eight kids, four of whom barely speak English. His wife is still a bit shell-shocked.

Brooke van der Riet was on her way to becoming a neurosurgeon, achievement-focused and not particularly religious, at the University of Virginia, when she found God on a red rock bluff during an Outward Bound adventure in Utah. She found Renaut, a gangly, raw-boned youth pastor, with hands the size of yard rakes, not long after. 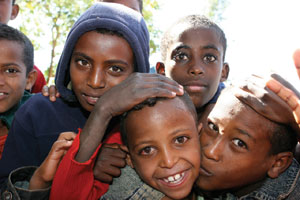 It wasn’t love at first sight, at least not for her, but there was chemistry. Back then, Renaut didn’t have any grand plan. But they were a good match, and through some kind of alchemy, his dreams grew, and through those dreams, she found her path to significance.

Significant, yes. Easy, not so much. While Brooke, who home-schools all eight kids, tries to share Renaut’s “glass half-full” optimism, at the end of the day she can’t help but feel sometimes that, empty or full, that’s just another glass she’s going to have to wash. The coffee shop has become a logistical challenge in its own right.

“To be honest, I’m struggling,” she says. “This is the hardest year of my life—bar none. I have eight kids I have to say ‘no’ to all day long. But you can’t grow unless you put yourself in a situation where you are forced to grow. It’s not like we can cut things out. We have to become able to handle more. Our capacity has to grow.”

Renaut acknowledges that life at home is crazy, but, like rocks in a tumbler, he remains hopeful that in time, the friction will yield eight beautifully polished young people, each capable of handling whatever bumps and scrapes the outside world may present.

Faith has carried them this far, and he figures he’ll stick with that plan. It’s a story still being written. But he’d love to tell you about it. Over coffee.

This article appears in the June 2013 issue of Orlando Magazine.
Categories: Community