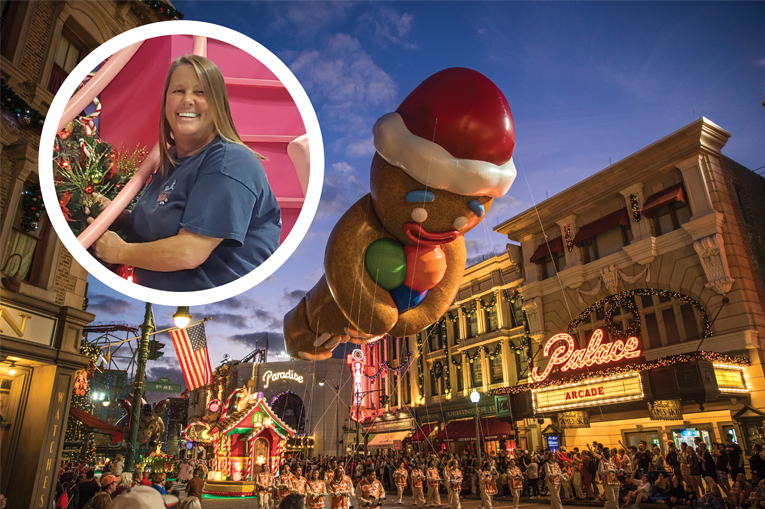 When do you begin planning Christmas decorations for Universal Orlando?

We begin planning for the next Christmas season after we have installed our décor in the park for the current year. Looking through décor catalogues is a great way to get inspiration for new looks. Walking through the park during the holiday season also helps us get fresh ideas for the next year.

How do you mix it up each year?

I definitely try to throw in a surprise or two every year. New flowers or specialty ornaments, which we call “hero elements,” are really important details that freshen up the décor from year to year. I enjoy playing with interesting color combinations as well. Our 2020 ball trees at the entrance to Seuss Landing in Universal’s Islands of Adventure were a big addition. In the New York area of Universal Studios Florida last year, [we added] a monkey icon to our Metropolis building. He actually became a minor celebrity on social media.

How do you map it all out?

The different locations within our parks are like individual neighborhoods. I like to have décor that looks good for each individual building, but at the same time goes well with the surrounding buildings.

How many people and how many days does it take to decorate?

I have a crew of 12 people who work on Christmas year-round. We start refreshing and creating new decor in March and finish up our building process the first or second week of October. The third week of October, we begin installing the décor, and we add about 15 people to our crews to get it all done in just 20 nights. We do our work after the park closes and are gone by the time the park opens.

Where do you store everything the rest of the year?

I have an air-conditioned workspace for my crew, and warehouse space that we use for storage. We store the décor for each individual building in its own space in the warehouse until it’s time to work on that particular building. We have around 250 crates of décor, and it takes 35 truckloads to bring all of the crates from our warehouse to the park for installs.

What areas do you decorate?

I am responsible for the holiday décor in Universal Studios Florida on the Main Entrance Arch, Hollywood Boulevard, New York, Central Park as well as Diagon Alley and London in The Wizarding World of Harry Potter. In Universal’s Islands of Adventure, I’m responsible for the Port of Entry, Seuss Landing, and Hogsmeade in The Wizarding World of Harry Potter. We also decorate the parade floats in the holiday parade and provide the décor for the live Grinchmas Who-liday Spectacular show.

What is your favorite area of the park to decorate?

New York in Universal Studios Florida. It was the first area at Universal Orlando that I ever decorated, and to this day it remains my favorite. It’s the biggest, the brightest, and it also reminds me of what Christmas looked like when I was growing up in Illinois.

Do you get to—or even want to—decorate your own house for Christmas?

I sometimes run out of energy to decorate my own home. But I at least always put up Christmas lights.

Who’s your favorite: the Grinch, Harry Potter or the Minions?

The Grinch, because I am old-school Christmas.

What gives you the most satisfaction in your job?

It might sound cliché, but it is seeing the smiles on our guests’ faces and hearing from them, and our own employees, just how much they like the décor.

This article appears in the December 2021 issue of Orlando Magazine.
Categories: Home Page Features, People, Where Orlando
Tags: Q&A, universal
Want to read the whole issue? Download and read this issue and others on Magzter.