This is a delightful time to experience New York City in all its festive glory. 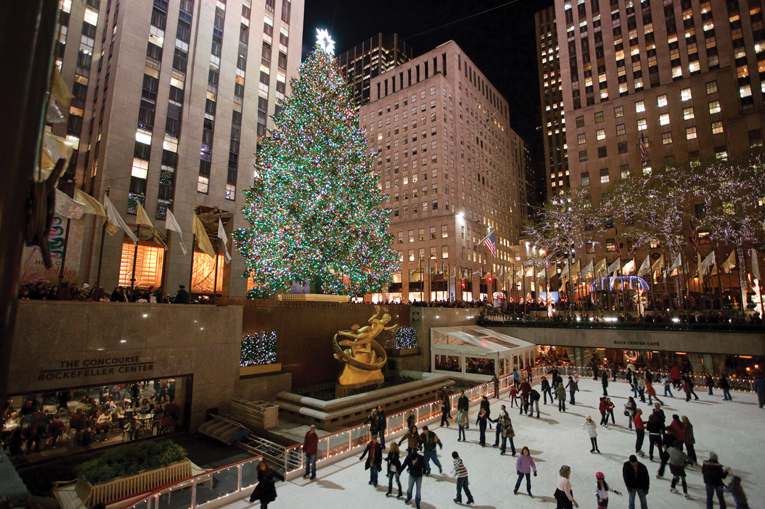 Skaters enjoy the ice rink at Rockefeller Center, which shines bright with its iconic Christmas tree. (WILL STEACY/NYC & COMPANY)

Lights twinkle. The smell of roasting chestnuts permeates the cool December air. Seasonal tunes flow from every store, subway and street corner. There’s a palpable feeling of excitement as the holidays approach. It’s the merriest time of year in New York City when the whole town takes on a festive glow with timeless traditions and festivities.

Broadway shows are live again. New shops and restaurants keep popping up. And the city—where a year ago you could jaywalk safely on empty Midtown streets during rush hour—has returned to its bustling 24/7 self, welcoming visitors to return.

No winter trip is complete without a stroll to see Manhattan’s decorated storefront windows. Start at Macy’s on 34th Street with its legendary animated displays and nightly light show. Then head to Fifth Avenue for the elaborate holiday-themed installations at Saks Fifth Avenue, Tiffany & Co., Bergdorf Goodman and nearby Bloomingdale’s. It’s best to go early in the morning, before 9, or late at night because crowds make front-row viewing difficult during the day.

Christmas is special at Rockefeller Center with the city’s tallest tree, an iconic symbol of the season. Nearby, Bryant Park’s Winter Village boasts another decorated tree, a rink with ice bumper cars, cozy heated igloos for sipping hot chocolate, and an open-air market with dozens of vendors selling handmade gifts. Even Patience and Fortitude, the giant marble lions at the adjacent main public library, sport holiday wreaths. 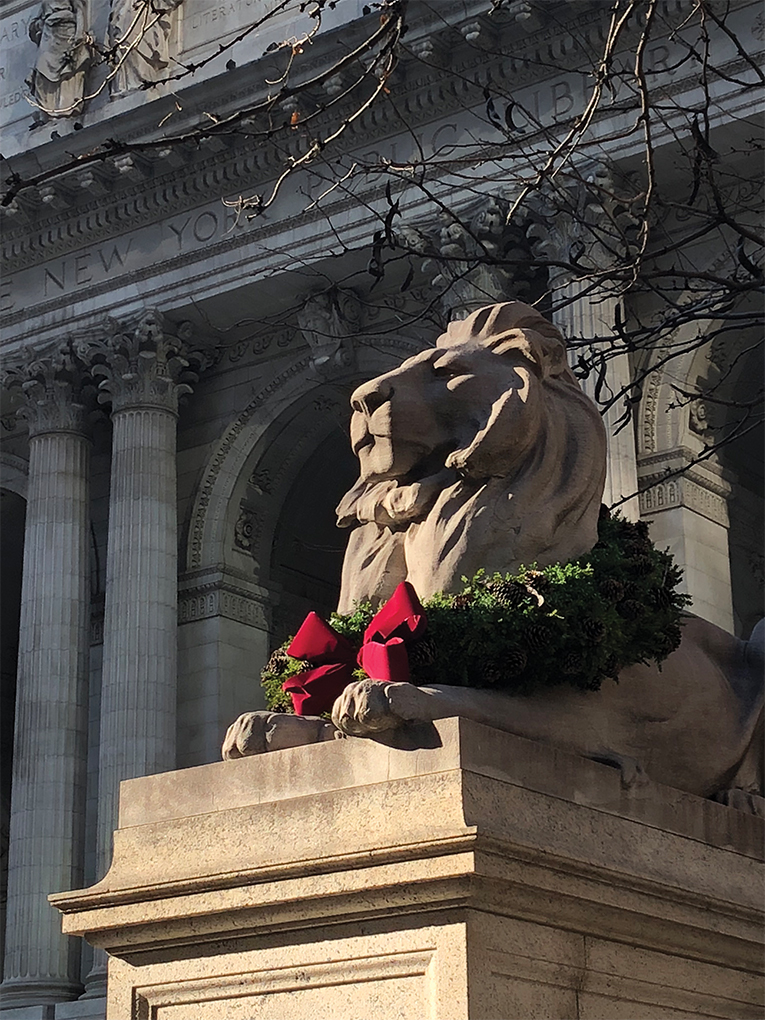 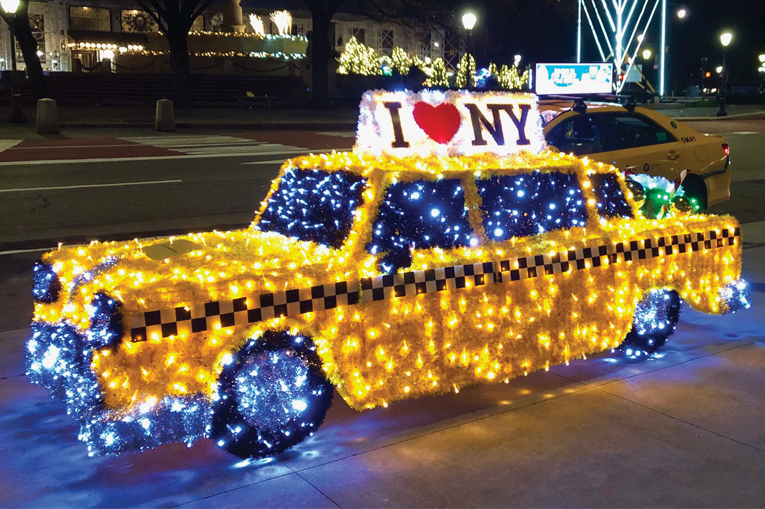 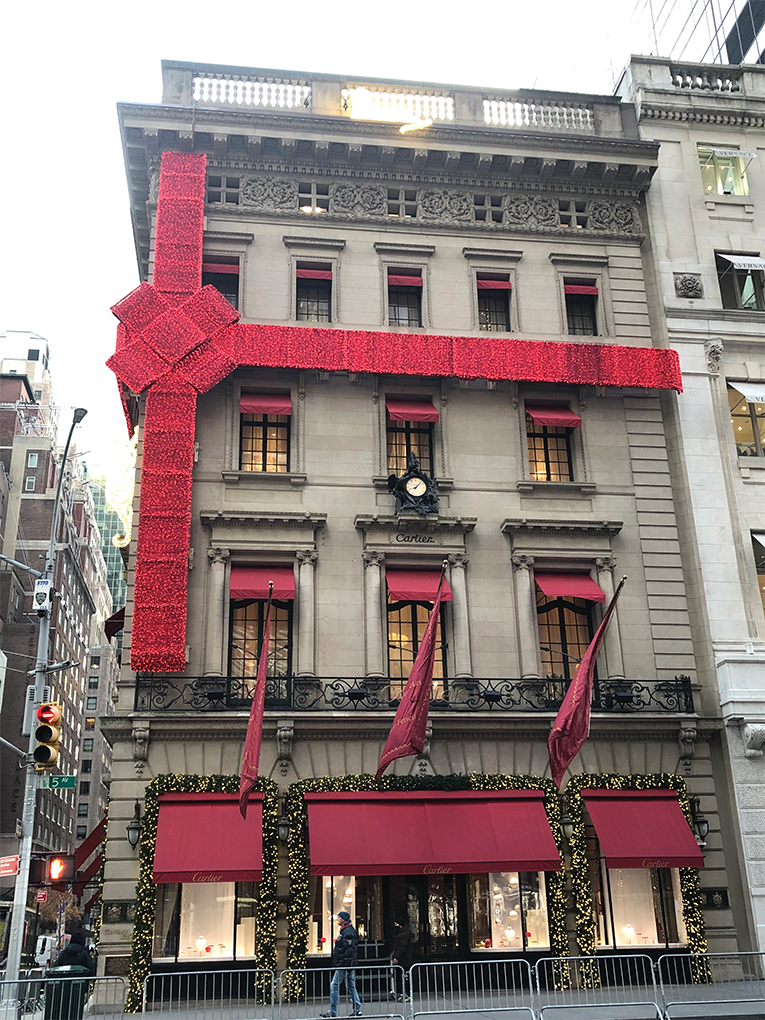 Buildings, taxis and even the marble lions in front of the New York Public Library get in the holiday spirit along Fifth Avenue. (BETHANY KANDEL)

For the city’s most unusual tree, covered in origami creations, head uptown to the American Museum of Natural History. You can also see the world’s largest collection of dinosaur fossils, the museum’s iconic 94-foot model of a blue whale, and the recently re-opened Halls of Gems and Minerals, with more than 5,000 specimens, including a 632-carat emerald and the world’s largest blue star sapphire.

Be sure to museum-hop; there are dozens to choose from, including the Met, MoMA, Guggenheim and Whitney. Go offbeat at the Museum of Sex, Museum of the Dog and the exhibitions at the Fashion Institute of Technology. Or do what the locals do and meander through Chelsea’s art galleries. Exhibits are free and filled with works of well-known and up-and-coming contemporary artists. Then get a unique perspective of the city by walking the 1.45-mile High Line, an elevated rail trail park.

Experience the city from above. The Empire State Building is celebrating its 90th anniversary with new heat lamps on its observation decks, historical exhibitions, live music and even sunrise admission to see the city awaken. The lights illuminating the skyscraper’s tower change colors every night.

To see the building from a distance you have lots of choices: there is the Top of the Rock Observatory at Rockefeller Plaza as well as the Edge in Hudson Yards, the highest outdoor sky deck in the Western Hemisphere. Just opened is SUMMIT One Vanderbilt, a three-story observatory/immersive experience in the skyscraper next to Grand Central Terminal, with glass and mirrored floors, exterior elevators and 360-degree vistas. Or take the tram to Roosevelt Island for great views from the new Graduate hotel’s 18th floor rooftop Panorama Room. 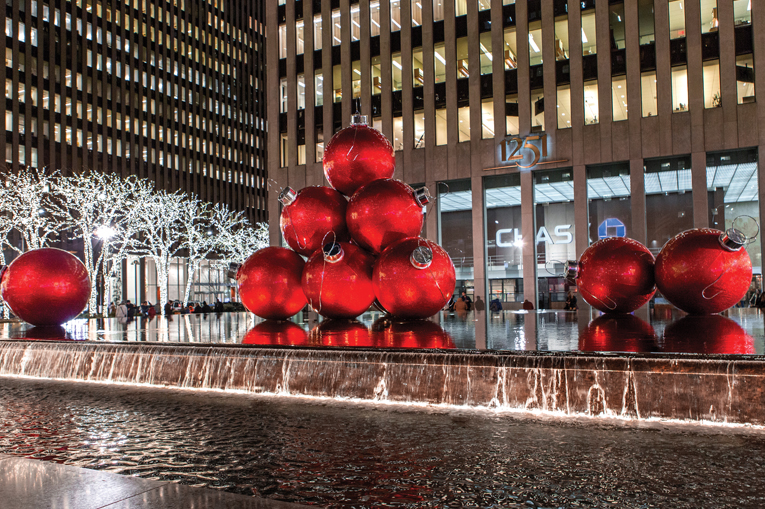 When downtown, visit the 9/11 Memorial & Museum, where you can see the twin reflecting pools in the footprints of the original World Trade Center towers. Admire the Oculus, a transportation hub and shopping mall built to resemble a hand releasing a dove.

Walk over the Brooklyn Bridge for skyline views of the Freedom Tower. Then take the Staten Island Ferry—the city’s best free boat ride—past Ellis Island and the Statue of Liberty for Instagram-worthy photos.

Get in the holiday spirit with the Rockettes leg-kick precision at Radio City’s Christmas Spectacular through January 2. Snag last-minute discount Broadway theater tickets at the TKTS booth on 47th Street. Previews open this month for The Music Man, a revival starring Hugh Jackman at the Winter Garden Theatre.

No trip to New York is complete without shopping. Kids will love the flagship Harry Potter store, steps from the Flatiron Building on East 22nd St., with interactive exhibits, VR experiences and (nonalcoholic) Butterbeer. Also new on the scene: a large LEGO store around the corner, and further downtown, a Sour Patch Kids candy shop in NoHo.

New York is one of the culinary capitals of the world, so dive in and explore. Go upscale at Le Bernardin or Gramercy Tavern, or snag a private ski-inspired cabin at The Greens, a rooftop venue on Pier 17. For New York classics, try the pastrami on rye with a half sour pickle at the 2nd Ave Deli, or a hot dog from Gray’s Papaya. Head to Chinatown for soup dumplings or dim sum. 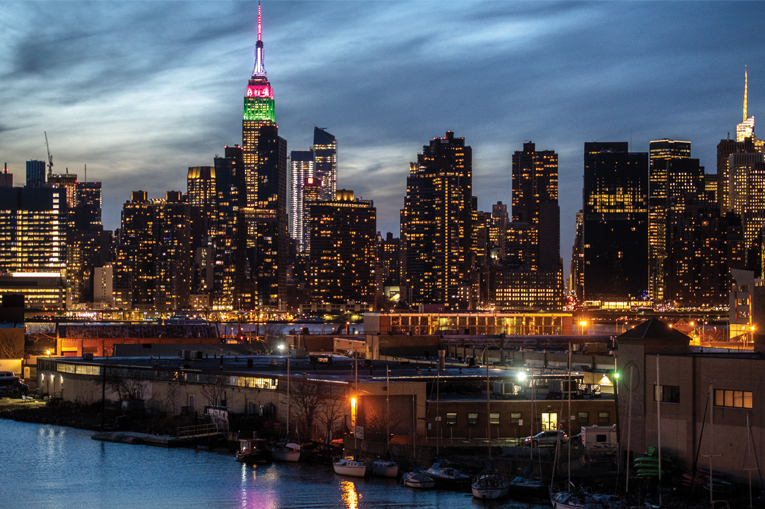 Don’t forget, the “city” is not just Manhattan. Venture into the outer boroughs. Hop the 7 train to Flushing, Queens, for authentic Asian food and get a peek at the Unisphere from the 1964 New York World’s Fair. Wander the streets of Bushwick, Brooklyn, to see creative street murals, and check out Dyker Heights, a neighborhood where locals go all out decorating their homes for the holidays.

There’s so much to do, you’ll have to come back for spring or summer. Remember the number-one rule: Wear comfortable shoes. You’ll walk more than you will ever imagine, but it’s the only way to see the city. It’s what real New Yorkers do.