History in the Making

A 15-year-old Charleston-style home ends up fitting in with its older counterparts in a historic downtown neighborhood.

Denise Bates Enos,
Sheltered by a 100-year-old live oak tree, the muted pink stucco home on East Amelia Street looks as if it has stood there for a century as well. But the bronze plaque on the front stoop tells a different story: The home’s established date is 1999.

The dark green-shuttered, two-story structure blends right into Lake Eola Heights’ eclectic mix of historic homes, and it’s no accident that this and other downtown neighborhoods have retained so much of their charm. Orlando has six designated historic districts, and any changes to homes in those areas must be vetted through the city’s Historic Preservation Board. The board must issue a “Certificate of Appropriateness” for any residential project in these districts, which also include the downtown, Lake Cherokee, Lake Copeland, Lake Lawsona and Colonialtown South areas. Projects requiring this certificate aren’t limited only to alterations or additions to existing structures; any new construction also must adhere to stringent requirements and meet the board’s approval. 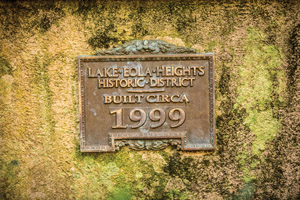 Homeowners Jeff Thompson and Raymond Cox know firsthand just how tough this process can be: When they submitted their original plan to build the Charleston-style home on East Amelia, the board summarily rejected it. They had wanted to build what’s  known as a “single house” in Charleston, and the long, narrow style with double porches that run the length of the home was a perfect fit for the rectangular configuration of the empty lot.

But because the single house is so closely identified with Charleston and because it wasn’t an established architectural style in Central Florida, the design didn’t meet the city’s “appropriateness” requirements. 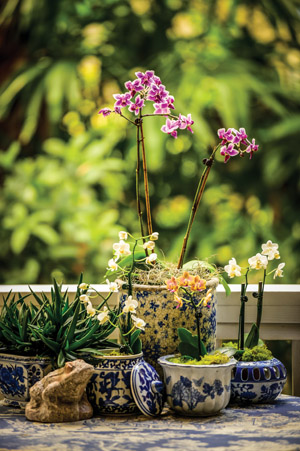 Cox, a Charleston native who grew up around single houses, was determined not to give up. While researching historic architecture, he came across an example of the “Florida I house,” so named for the I-shaped footprint of the home. The style was similar to a Charleston single house, right down to the upper and lower porches. Cox even found an old aerial view map of downtown Orlando showing homes that appeared to be Florida I houses. Presented with this historic and cartographic evidence, the city’s preservation officials ultimately approved the project.

And now, 15 years later, most passersby never suspect that the home is a relative newcomer to the brick-lined block. Getting approval to build “was an arduous process, but worth it,” says Thompson. “One member of the preservation board really pushed against it, but after it was built she made a special effort to stop by and say how much she liked it and thought it was appropriate.”

The home is filled with details that pay homage to its historic inspiration, including what lies behind the front door—it doesn’t open into the interior of the home, but instead reveals the first-floor porch, or “piazza,” as they’re called in Charleston. Running from the front of the home to the back, it’s a long, columned expanse that hints at the gracious ambience inside.
Comfortable chairs invite visitors to come and sit a spell, while a variety of vessels contain lush plantings that are evidence of Thompson’s profession as a senior landscape architect for Walt Disney World. Orchids, ferns, bromeliads and other flowering and leafy species clearly thrive under Thompson’s expert touch here, and the home’s back and side yards hold an even greater botanical bounty.

Inside the home, an oval foyer and graceful dogleg staircase greet visitors once they pass through the “real” front door, located at the center of the side porch. To the left of the staircase, a well-appointed living and dining area looks as if it were lifted straight from a Battery manse in Charleston. A comfortable mix of plump upholstered pieces, antiques, original artwork and curiosities creates a warm and elegant space. Time-honored architectural details, including deep crown molding, ceiling medallions and a stately fireplace establish the room’s historic ambience.

That ambience continues in the more casual kitchen/rear enclosed porch area, which has a farmhouse kitchen look. A backsplash composed of windows bathes the countertops in light, and the porch pays homage to an old Southern tradition: the beadboard ceiling is painted “haint blue,” a pale cerulean shade once believed to repel restless spirits. 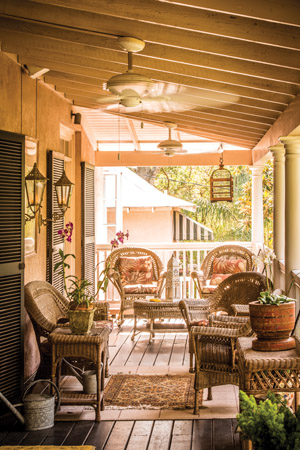 On the second story, a canopy of palms and other trees provides a leafy bower for the upper side porch, giving it a tree house feel and sheltering it from the brick street below. Victorian-inspired wicker furnishings anchor the space, and Thompson’s green thumb is again evident in the myriad plants that lend texture and color to the porch.

When the home was first built, the second-story porch railing had a decided wiggle, not surprising for such a long expanse of rail. The couple found an architecturally appropriate solution in the city that inspired it all: On a historic home tour in Charleston, they spotted metal supports bracing a similar porch rail.

They incorporated the braces into their own home, and now the railing is wiggle-free.

During the design process, Cox brought additional Charlestonian touches to the home, including a bedroom designed to resemble the traditional Southern sleeping porch. Historically, these rooms were intended to catch breezes during the summer before the days of air-conditioning. They usually had screened walls on three sides for optimum airflow. For their version, Cox and Thompson replaced the screens with casement windows, but retained the beadboard ceiling and wainscoting that are hallmarks of this room style.

Another architectural feature that was once used to beat the heat can be found in the transoms over the doors. Windows like these were left open during warm weather to let rising heat escape; in the Thompson-Cox home, they bring in extra light and architectural interest. 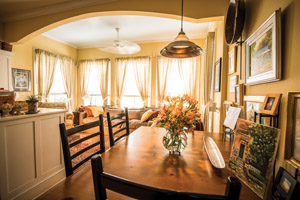 Designing and building their home was a labor of love for the couple, and the process was at least partly responsible for Cox’s decision to earn a graduate degree in historic preservation. He has been a purser with Delta Airlines for nearly three decades, and his flexible work schedule has allowed him to become deeply involved in the Lake Eola Heights community, ultimately (and perhaps ironically) earning him a place on the Orlando Historic Preservation Board. “Then it hit me; if I have been volunteering over the past years in defending the neighborhood, I must really enjoy it and so the seed was planted,” Cox says. He enrolled in the Savannah College of Art and Design and earned a Master of Arts degree in 2008.

The couple’s home stands as a testament that infill housing doesn’t have to stick out like a sore thumb, and even though the City of Orlando’s vetting process can be challenging, it assures that our downtown neighborhoods will retain their character even as they evolve.