Hamilton was here, but there’s so much more to Nevis, a forgotten Caribbean gem.

A rooster’s crow mingles with the sound of leaves rustling from the breeze blowing off the sea. A troop of monkeys, three babies in tow, alternately lounge and scamper on the lawn beneath the frangipani tree, its crown ablaze with red blossoms. Stay, or head to breakfast? It’s just one of the decisions you’ll have to make when staying at one of the original sugar plantations—Montpelier, the Hermitage and Nisbet—on the island of Nevis.

To find Nevis on Google Maps, type “Caribbean” and then zoom in a couple of clicks. Tucked beside its sister island St. Kitts, east of Puerto Rico, the 36-square-mile Nevis really is a forgotten spot in the Caribbean. Though a little less so these days as fans of the Broadway megahit Hamilton, An American Musical make the pilgrimage to the birthplace of their favorite founding father. Lucky for them, the lush island landscape and many of its maintained 18th-century buildings make it easy to experience Nevis through the eyes of a young Alexander Hamilton, born here in 1757. 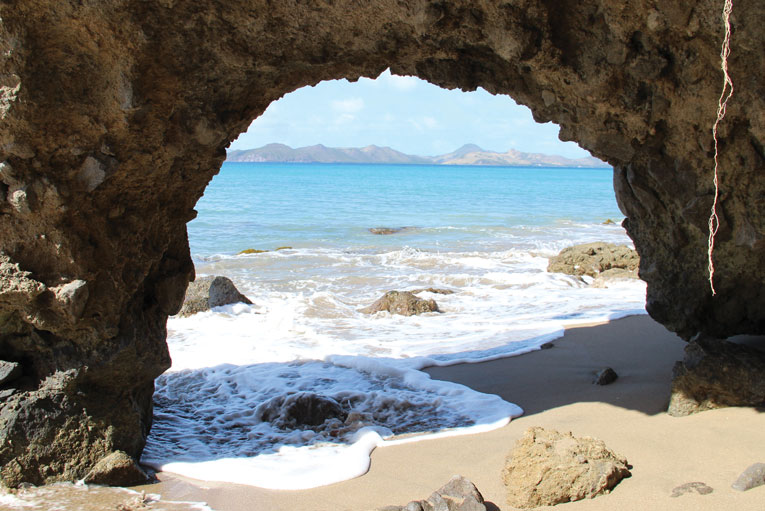 Mountain Perch
Situated 750 feet above sea level, the 60-acre Montpelier Plantation & Beach is the only Relais & Chateaux-designated (unique, luxurious, individually-owned) hotel in the Caribbean, and it is always shadowed by Nevis Peak. Glance through the stone archway during breakfast in the courtyard, and there it is, enveloped in cottony clouds. Push yourself out of the pool on the end nearest the 300-year-old sugar mill ruin, and Nevis Peak calls again. Many guests tackle the 3-4 hour trek to the peak, which requires a guide. “It’s not an easy hike,” says Kakia Michou Marcolongo, the hotel’s marketing director, “but the feeling from the top is amazing.”

A daily shuttle takes guests down to Montpelier’s private cove at Pinney’s Beach. Thursday is “Lazy BBQ” day, a popular event where guests can play cricket on the beach after lunch.

Old Caribbean
Enter the great house at The Hermitage and a rum punch dusted with nutmeg will likely land in your hand as you’re greeted by owner Richard Lupinacci: “All of the history of the Caribbean is right here in this room.” He’s not exaggerating. The house he bought in 1971 and raised his family in is the oldest surviving wooden structure in all of the Caribbean and dates to 1640. “Alexander Hamilton would have known and visited this house as a child,” he’ll say, if you give him the green light to share his interest in Hamilton—both the man and the musical. 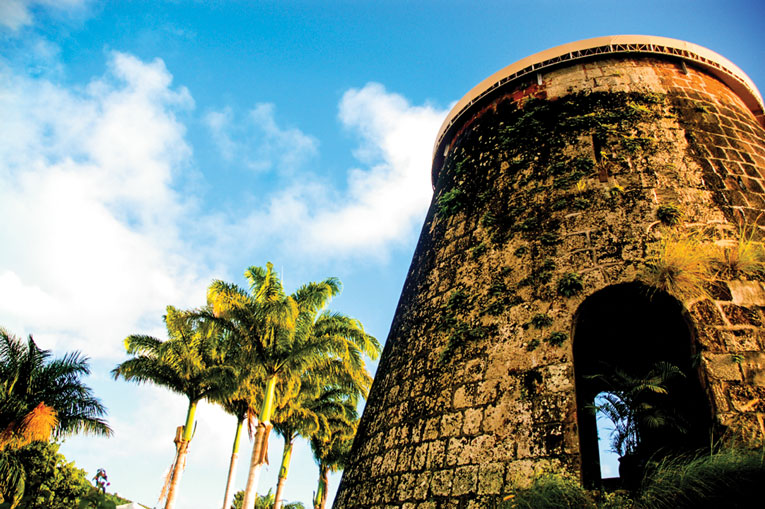 Lupinacci added the quintessential Caribbean gingerbread cottages in the 1980s and began running the Hermitage as a country guesthouse. Like Montpelier, the Hermitage is a no A/C, no TV getaway. You come to unplug, to listen to the pearly-eyed thrasher chirp, to watch the monkeys steal mangos, and to sunbathe by the pool. Then there’s the food that has made Wednesday nights something of an institution on the island. Locals and visitors arrive for the weekly West Indies Pig Roast, a Thanksgiving feast with a Caribbean twist.

Dinner is served from the family’s dining room table and enjoyed on the screened porch. Recipes showcase regional ingredients such as breadfruit, pumpkin, red cabbage, fresh fish and a locally raised pig. Each dish is served on a piece of the family’s collection of Newcastle Pottery made from a red clay native to the island. The meal starts with Fisherman’s Pot soup, says Lupinacci’s son Richie, “served from a large clay pot called an ‘omigod.’ It’s called an ‘omigod’ because that is what you say if you drop it, ‘Oh Me God!’ ”

Sea Level
A spectacular palm-lined path leads guests directly from the great house of Nisbet Plantation Beach Club to the beach and the deep-hued Atlantic Ocean. Here, guest cottages (with A/C, but no TV) are scattered among the expansive, palm-dotted lawns.

The stone-and-wood great house dates back to 1778 and belonged to the family of Fanny Nisbet, whose marriage to British naval commander Horatio Nelson brought some fame to the island. It’s easy to sip a cocktail on the enclosed porch and imagine Lord Nelson in uniform striding through the door. A formal dinner here is a must and is always presided over by impeccably dressed maître d’ Patterson Fleming, wearing one of his 6,000-plus ties, many given to him by devoted guests.

Join Fleming on Friday afternoons for a dressed-down pub crawl where he acts as host and guide to explore the local scene. There is no better way to eat, drink and laugh with other guests and locals alike. 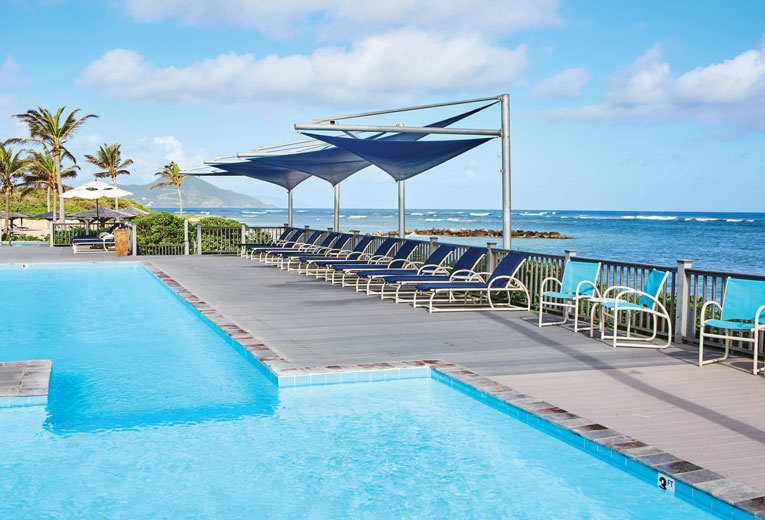 At Nisbet Plantation Beach Club, you don’t have to choose between the pool and the beach (PATTERSON FLEMING)

Round out your Nevis getaway with history, an island tour and dinner in a magical, treehouse-like bungalow. nevisisland.com

Alexander Hamilton
His birthplace and childhood home double as the Nevis History Museum, which is located on the waterfront in Charlestown. The musical’s album plays on a loop, elevating a visit for fans into a thrilling pilgrimage experience. There’s a café in the garden for a casual lunch.

Charlestown
The narrow, cobbled streets look much as they would have during Hamilton’s childhood, says local guide Charles Pemberton. “Buildings are always repaired or rebuilt exactly as the originals. Nothing added or changed.” Lower levels are built from stone and the upper levels are wood, painted in pastel colors.

Funky Monkey
The best way to see the entire island, from the Atlantic side to the Caribbean, is on a guided Funky Monkey ATV tour. Plan this for your first day and have your guide pick you up at your hotel. End at Sunshine’s on Pinney’s Beach for a passionfruit and rum Killer Bee cocktail.

Bananas Bistro
A lantern-lit garden path is the first clue you’re onto something special. Climb several steps to reach the stone-floored wraparound porch where diners are serenaded by tree frogs. If there were such a thing as a Caribbean speakeasy, this would be it.