Two downtown lounges—NV and Rok Room—are inconspicuous by their presence.

Blink and you may miss NV Lounge as you walk by the Pine Street bar’s entrance flanked by two attorney’s offices near the CityArts Factory. It’s a subtle but handsome wood frame-with-glass doorway, and beyond it is one of downtown’s best-kept secrets.

In a past life, NV would have been a speakeasy for elegant people, the kind who always get away with breaking the law because they’re above it. The room is about as wide as a one-car garage, but it’s long and sexy like a Milan runway model.  Brick walls decorated with artsy photography by local shooters and wood floors give it a solid, manly feel, but the plush booths and cushy furniture on the main and second floors soften the space. Not a flat screen to be seen completes NV’s purpose as a room for conversation that’s as high-brow as the wine, craft beers and cocktails poured at the J-shaped bar, a piece of art in itself. Mature comes to mind when looking around at the clientele.

If the place reminds you of an art gallery, that’s because NV stands for Nu Visions in Photography, a working
studio by day.

Bars with square footage galore have their upsides, but they often fall short as gathering places for intimate get-togethers. NV’s diminutiveness, however, encourages closeness, with dim lighting and background music enhancing the effect.

To say NV’s not for everyone would be an understatement. But if it were, no one would be able to move around inside. (27 E. Pine St.; nvorlando.com) 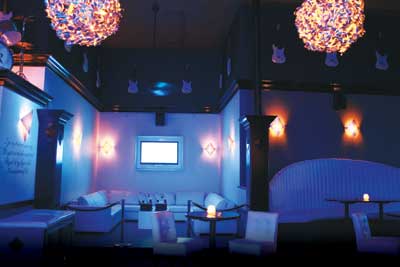 In a downtown alley, party like a Rok star

You’ve probably seen enough TV crime dramas to know that nothing good ever happens in an alley. And that’s why the Rok Room seems so out of place in its tucked-away spot behind Antigua nightclub on Church Street.

It’s too pretty and too upscale to be a back-alley bar, much less a rock-music hangout. Hard-core rockers wouldn’t be caught alive in this place, a chi-chi ultra lounge frequented by designer-labeled twentysomethings with excellent credit scores.

So Rok Room is not what its name (lack of “c” in first word, notwithstanding) and location imply—to me, at least. It’s soft rock, commercially appealing in a John Mayer sort of way. It’s a beautiful nightclub, don’t get me wrong, filled with beautiful people taking full advantage of the 2-for-1 drink specials until 11:30 p.m., when the place really gets cranking.

It’s just not what I expected to find in an alley, which, I should note, was well lit and clean, not anything like those grungy backstreets depicted on TV crime shows. (41 W. Church St.; rokroom.com)

This article appears in the December 2011 issue of Orlando Magazine.
Categories: Community, Nightlife & Bars
Want to read the whole issue? Download and read this issue and others on Magzter.