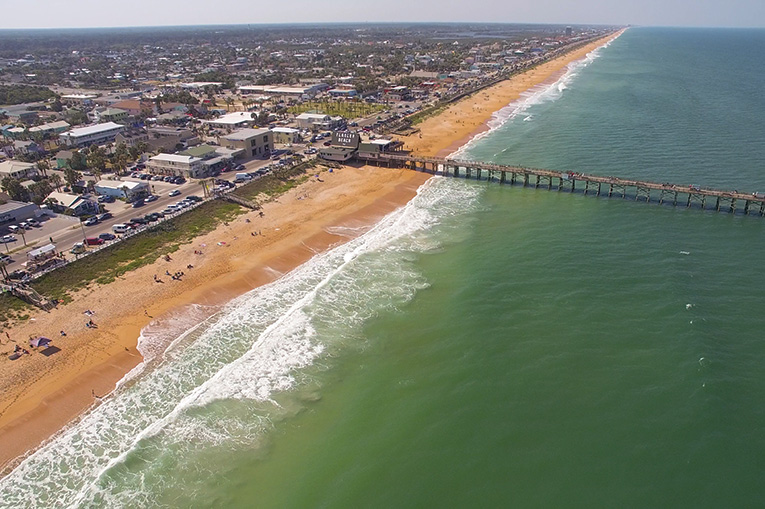 On the Ocean’s Edge

If you want to drive a convertible along the Atlantic coast, close enough to the sandy shore that you can feel the ocean winds on your face and smell the salty sea air, then Flagler Beach is your kind of place. Highway A1A travels through this easygoing town—its black asphalt running parallel to cinnamon sands—and just off its shoulder, wooden stairs descend to a vast stretch of beach bliss. Located between Daytona Beach and St. Augustine, it’s an easy day trip from Orlando.

There are no shade-casting high-rises, and bungalows blend with an eclectic mix of homes on the waterfront road and its side streets. The town has its own sense of beach culture, evident in young surfers catching a wave as well as old salts casting a line. Its pooch-friendly zones make it one of the best beaches in the state for canines.

Most iconic is its municipal fishing pier that juts out 806 feet into the Atlantic. Besides serving as a boardwalk for a nice stroll, folks enjoy vistas of sunrises and boats on the horizon, and locals use it as a relaxing spot to just hang out.

Or you could claim a seat at one of the beach bars and quaff an ice-cold brew. High Tides at Snack Jack is the quintessential example. Right smack on the sands, perched on stilts, the restaurant—with its floor-to-ceiling windows—couldn’t get any closer to the wave action. Diners munch on everything seafood, from conch fritters and coconut shrimp to smoked fish dip and fried combo platters.

A six-block downtown area, west of the pier, is a salute to small business owners. Stores like SeaCasas, owned by Brenda Carter de Treville, is a treasure trove of coastal-inspired design items for the home, with original art, hand-blown glass chandeliers and custom jewelry. At The Pink Turtle Gift Shoppe, owner Deborah Phillips works with as many as 35 local artisans to fill her 1920 beach cottage-turned-store with crafts, including wall art, vintage jewelry, candles and creative items featuring mermaids, dolphins and turtles.

Browse the artistic offerings at GOLA (gallery of local artists). Watercolors, acrylics, pottery, shell art and other art forms by Flagler Beach talent are for sale at this popular shop. 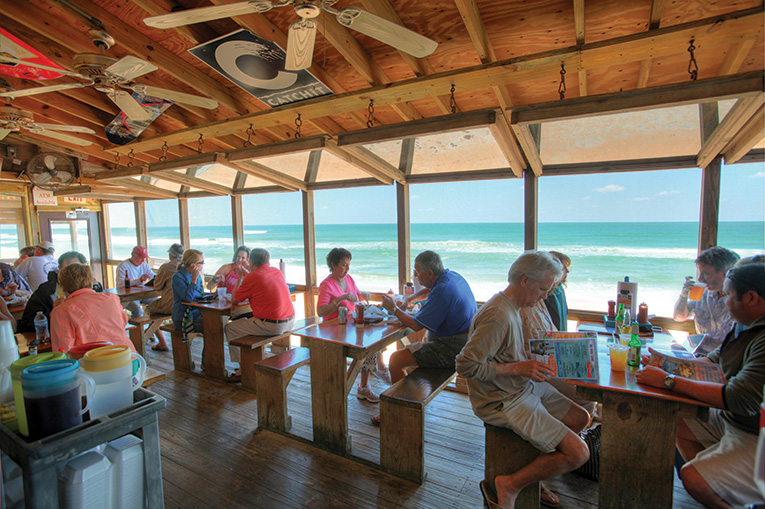 This 1945 house was converted to accommodate guests, but retains many of its midcentury design elements, such as curved walls and glass-block windows. Expect four-poster beds and in-room Jacuzzis at this adult-only property across the street from the beach.

A Sweet Place to Visit 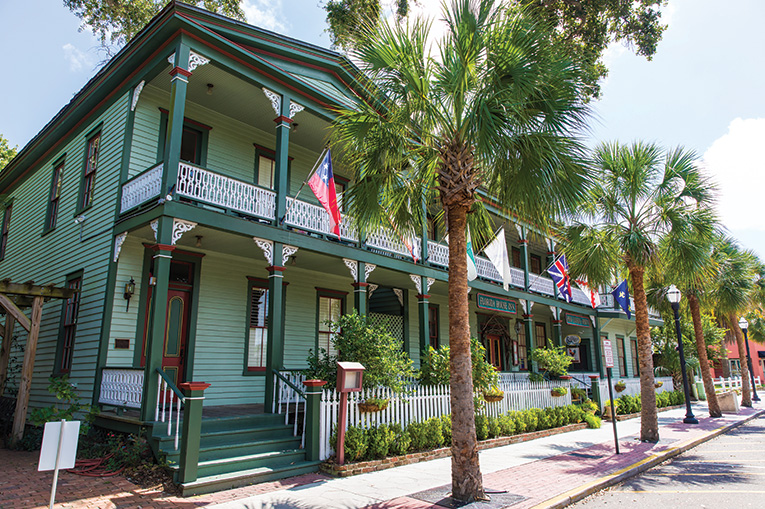 One of the last stops on the Atlantic Coast before you cross the Florida/Georgia line is Amelia Island, home to the Victorian seaport of Fernandina Beach. The small historic town has all the romantic trappings of a bygone era: horse-drawn carriages, fancifully painted Gilded Age homes, an Americana-style main street and the Palace Saloon. Its rich history and folklore are evident at every turn.

Shrimp boats, easily identified by their wing-like nets, dock on the Amelia River and are a reminder that the area is the birthplace of the American shrimping industry. Although the early 1900s was the heyday, Fernandina shrimpers still ply the ocean and rivers for the abundant crustaceans.

Historic Downtown Fernandina Beach’s Centre Street is lined with buildings dating back to the late 19th and early 20th centuries. Noteworthy are their details, from exterior brick designs to heavy wooden doors to embossed tin ceilings. Today they house charming shops. An old train depot and city hall with an 1892 clock tower are among the well-preserved public buildings; however, the most iconic may well be the Palace Saloon. A 1903 drinking establishment that catered to tycoons the likes of Rockefeller and Carnegie, as well as salty sea captains and rowdy gun runners, it boasts mosaic floors, hand-carved mahogany caryatids and a 40-foot bar that give it a nostalgic vibe.

Explore the side streets, and you’ll come upon magnificent mansions of the Victorian era—many now operate as bed-and-breakfasts. Most imposing is the Fairbanks House, a four-story Italianate-style home with a tower, dormers, bay windows, massive chimneys and balustrade balconies and porches.

Besides great history, the area is blessed with nature. A drive down the coast to Big Talbot Island State Park, one of the few undeveloped barrier islands left on the Atlantic side, turns up a secret spot. The park’s Black Rock Trail leads to a 20-foot bluff. Below, lavalike rock formations—actually petrified soil a million years old—jut from the shore. Once you descend, you’ll have a good view of the branches of fallen oaks and cedars sprawled on the beach. These sun-bleached skeletons of trees that once grew along the forest’s shore are now giant driftwood relics that create an eerie scene, earning this stretch of sand the moniker: Boneyard Beach. 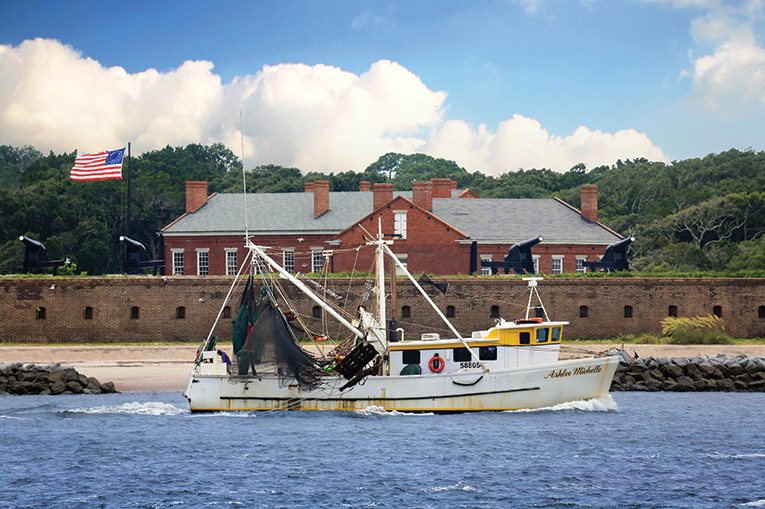 The park’s well-preserved Civil War-era fort rests on the edge of St. Mary’s River facing Georgia. A climb to the highest point, where cannons sit ready to defend, rewards with views of the river and two states. Fort Clinch was occupied by both Confederate and Union armies, and reenactments are held the first weekend of each month.

To experience the small-town appeal of Fernandina Beach—history, food and fun—visit during the Isle of Eight Flags Shrimp Festival (May 1-3). Centre Street is the hub of the action for judging the pirate costume contest, shopping for antiques, sampling shrimp dishes and crowning Miss Shrimp.