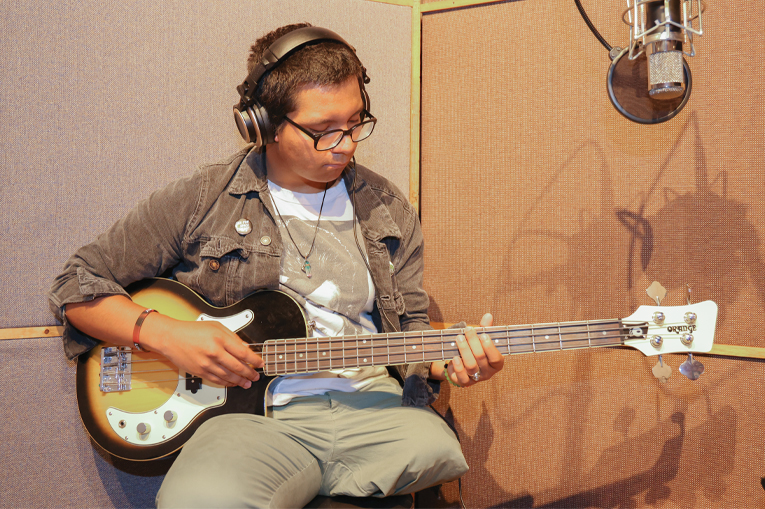 Jorge Rayos is where he belongs, creating music for the world to hear. (PHOTOS PROVIDED BY ORLANDO HEALTH)

Jorge Rayos marks time with his words and his music.

At 18, his clock ticks faster than most. He has been diagnosed with osteosarcoma, a highly aggressive form of bone cancer. Though scarred, Jorge is hardly broken.
He finds purpose in a concept album he created, based on the Arthurian legend and romance of Queen Guinevere, the wife of King Arthur and the lover of her husband’s best knight, Sir Lancelot du Lac.

A recent launch party at Orlando Health Arnold Palmer Hospital for Children celebrated the release of the album, featuring a nine song series entitled “Guinevere.”
“I hope a lot of people listen to it because it’s a piece of art that I made,” he said. “What most artists want is to be seen. I know I made something really good, and I shared it with people who are close to me.”

Jorge played the entire album for his mother, father, two sisters, girlfriend, and team members at the hospital before its release. They were there to celebrate and honor his achievement. Smiles, balloons, and photo ops were plentiful.

“Someone printed out these papers with my album cover on it, and nurses were coming to ask me for autographs,” Jorge said. “It made me feel like I was famous, which I thought was really nice of them.”

The feeling was mutual among those who attended the launch party.

“This is one of the many examples of how our team members go above and beyond for our patients,” said Cary D’Ortona, president of Orlando Health Arnold Palmer Hospital for Children and senior vice president of Orlando Health. “I’m so glad that many of Jorge’s care team and family members could be there to celebrate his incredible talent and legacy.”

The album marks the culmination of an artistic pursuit that began at the age of 10, when Jorge started taking guitar lessons. He worked with a teacher for a month before nurturing his musical muse on his own terms, developing his style by teaching himself chords and how to finger pick.

“After that it was me teaching myself,” he said. “In high school, I took keyboard lessons and started writing songs.”

He also started writing poetry. “Songwriting is basically poetry to music,” he said.

He recorded all the instruments and vocals on the album, which was released Oct. 15th and is available on Spotify, Apple Music, and other platforms.
Jorge’s studio time was granted by Make-A-Wish Central & Northern Florida. Jorge spent three days—10 hours each day—creating the album at a local recording studio in Orlando. “Everything you hear on the album is me,” Jorge said.

Said Anne Cuba, president & CEO of Make-A-Wish Central & Northern Florida: “We were so grateful to be able to grant Jorge’s wish and to give him a platform to share his voice and passion for music with the world. He is such a talented individual and seeing photos of him in the studio felt so natural—like it was where he belonged.”

He does belong. And his work will be timeless.

“No matter what happens,” he said, “I am really proud of what I made.”

This article appears in the December 2022 issue of Orlando Magazine.
Categories: Community, Lifestyle
Tags: Community, Jorge Rayos, make a wish., music, Orlando Health
Want to read the whole issue? Download and read this issue and others on Magzter.