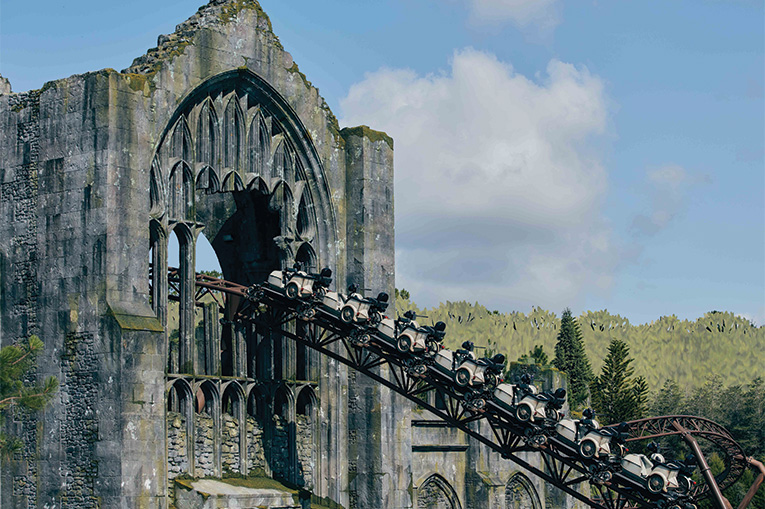 You have a choice of riding the motorbike or the sidecar on Hagrid’s coaster adventure. (UNIVERSAL ORLANDO RESORT)

You have a choice of riding the motorbike or the sidecar on Hagrid’s coaster adventure.

Motorbike or sidecar? That is the question. After waiting in line, possibly for hours, you must decide whether you’ll straddle or sit, drive or ride before being thrust deep into the Forbidden Forest to attend Hagrid’s Care of Magical Creatures Class, on the outskirts of Hogwarts Castle at Universal Orlando Resort’s Islands of Adventure.

In retiring the Dragon Challenge roller coaster, Universal repurposed valuable real estate within Hogsmeade Village into its major 2019 attraction, Hagrid’s Magical Creatures Motorbike Adventure. Universal makes good on its commitment to building the Wizarding World of Harry Potter “by the book,” bringing to life only details direct from the pages of J.K. Rowling’s seven-book series. For instance, this is the first time that Potter fans will see a blast-ended skrewt—described in the fourth book, Goblet of Fire, as a hybrid creature bred by Hagrid that looks a lot like a headless lobster.

The ride itself isn’t so much a roller coaster with loop-the-loop and stomach-dropping vertical plunges, but a thrilling motorbike ride through the forest—yes, a real forest! —that captures the exhilaration of acceleration, the thrill of leaning into turns, along with many surprise encounters along the way. Hagrid’s Motorbike Adventure achieves the perfect balance of storytelling and thrill ride, slowing down just enough to let you enjoy your few minutes of immersion in Rowling’s fantasy world before launching you down another unexpected path, deeper into the author’s imagination brought to life by Universal’s creative team.

You might have heard about people waiting 10 hours to experience Hagrid’s Motorbike Adventure when it opened in June. True story. But, according to the Universal Orlando app, the real-time wait as I write this is only 60 minutes. The beauty of being a hometown tourist is having the flexibility to play in our theme parks when the rest of the world isn’t. (How many Facebook posts did you see of Orlando friends at Universal or Disney while waiting for Hurricane Dorian?)

If you’re coming for one of Hagrid’s lessons (oh yes, expect cornish pixies, unicorns, fire crabs and other magical creatures too), stick around after dark for another Potter treat, Dark Arts at Hogwarts Castle, which premiered in Orlando in September. The multimedia projection mapping experience lets loose the Death Eaters, devotees of Lord Voldemort, who seem like real entities, arriving on the wisps of a foreboding green light and fog that fills Hogsmeade, announcing their imminent arrival. This theatrical cue is also the “tap on the shoulder” reminding you to find a good vantage to view Hogwarts Castle when the lights, sound and special effects begin.

Now and Later
If you haven’t been to Universal Orlando Resort’s theme parks or City Walk in awhile, here’s what else you might have missed.

Last year’s major new attraction was Fast & Furious—Supercharged, a Universal Studios ride that is as low-impact as it is fully immersive in the eight-film franchise featuring fast cars and family loyalty. For fans, the queue may be a bigger deal than the actual ride. Fifteen stunt cars from the films are part of the detailed storytelling that unfolds as you make your way to the ride vehicle, aka the “party bus,” which feels like a 3D environment, without the need to wear 3D glasses.

Two words for another thing Universal got right with this attraction: air conditioning. The entire queue is either shaded or indoors and on a hot Orlando day, you might wish the line to last longer. Fast & Furious—Supercharged also uses the same Virtual Line on the Official Universal Orlando Resort app as does Race Through New York Starring Jimmy Fallon. Simply touch a button to “join” the line and you’ll be notified on your personal mobile device when it’s your turn.

Virtual Line isn’t the only newer feature on the app. Getting hangry while waiting for a ride? Open the app, press “order food and drinks,” browse menus of nearby quick service restaurants, order, pay with a credit card. When you’re ready and on your way to the restaurant, click “prepare my order” then simply pick it up at the Mobile Express Pickup window. If only waiting for rides was this seamless!

Another hot new arrival can’t be ordered on the app, comes in pink boxes and you don’t need a ticket to try it. Voodoo Doughnut from Portland, Oregon set up shop at City Walk—the first location east of the Mississippi. To help you choose from some 50 different doughnuts, the line spirals around a central food carousel displaying doughnuts such as Oh Captain, My Captain, the Cap’n Crunch-coated concoction, and the iconic Voodoo Doll that’s glazed with chocolate, filled with raspberry jelly and pierced through the heart with a pretzel stick. Need some savory with your sweet? Try a Voodoo Doughnut Burger at the free-standing Coca-Cola kiosk in City Walk or a beer and doughnut flight at NBC Grill Brew (next door to Voodoo).

An Ode to Staycations
Thanks to an abundance of world-class resorts, Central Floridians have really refined the art of the staycation. Now they have two new options at Universal Orlando Resort; both skewing to the value side while including the Universal benefits exclusive to resort guests, including early access to the Wizarding World of Harry Potter and Volcano Bay, complimentary park transportation, resort-wide charging privileges and even special access to select clubs at CityWalk.

Universal’s Aventura Hotel is a new highrise that sits directly between Loews Sapphire Falls Resort and Universal’s Cabana Bay Beach Resort. Its theme is modern-style and high-tech with a low-price twist. Floor-to-ceiling windows in guest rooms, a rooftop bar and a food hall dining concept are some of the features of this Prime Value hotel within Universal’s portfolio. And though the designated park transportation is a shuttle bus, you can walk across to Sapphire Falls and ride the water taxi instead.

The recent opening of Universal’s Endless Summer Resort – Surfside Inn and Suites & Dockside Inn and Suites breaks ground on two firsts. Endless Summer is the first Universal property to be built east of I-4, at the intersection of I-Drive and Universal Boulevard. It’s also the first in an additional price category, Value. Expect Universal-level theming and hotel style, guest-only benefits, and the absolute lowest prices. In return, you’ll trade some of the convenience of being nearer the parks and City Walk.

On the Epic Horizon
Universal recently announced it will open a stunt show next spring based on the spy film character Jason Bourne. But the giant coming down the pike is Epic Universe. No word yet on timing or theme, but bigwigs are adamant about the scope of its epicness, which will be located on a new site, east of I-4. Expect new hotels, restaurants, entertainment and shops within a larger parcel that nearly doubles Universal’s total available acreage in Central Florida.

Motorbike or Sidecar?
Back to the original question for those who have yet to ride Hagrid’s Magical Creatures Motorbike Adventure. If you have the luxury to choose your seat, go for the motorbike. The way you straddle the seat and lean into the handlebars changes your perspective and sensation of riding a coaster. If you have to flip for it, the sidecar is awesome too. It captures the same speed, surprises and storytelling, with the familiarity of sitting in a ride carriage. Either way, you’ll be on board one of the most coveted seats in the entire universe. 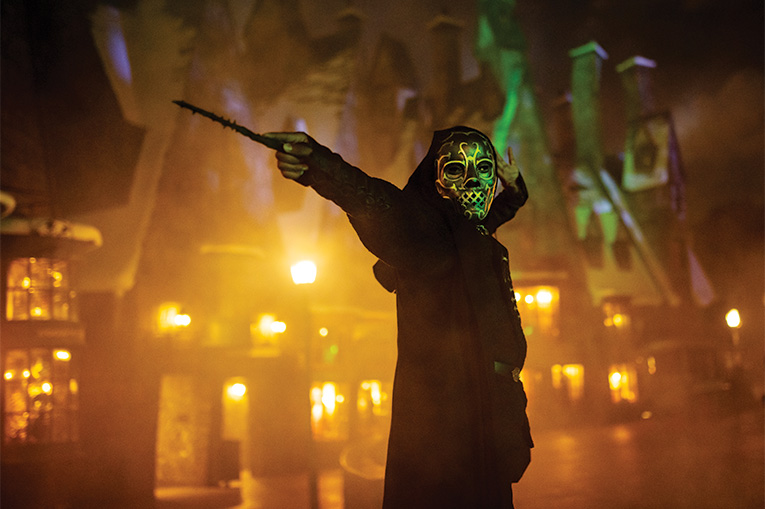 This article appears in the November 2019 issue of Orlando Magazine.
Categories: News and Features
Tags: Theme, theme park, universal, universal orlando
Want to read the whole issue? Download and read this issue and others on Magzter.