From simple beginnings, the Southern staple has made itself right at home in the finest restaurants.

Heaven comes to earth in many guises. In the South, we offer up transcendent smiles over beautiful lakefront vistas, over deep woods and fertile fields, and over our porch-sitting neighbors and polite passers-by. Once the table is set, we give thanks to whatever angels or fates led us to this culinary paradise. (Sing praise and pass the black-eyed peas.) But no matter how diverse or generous the bounty, there’s one dish that resonates with a divine spark on all our Southern palates.

It’s creamy, it’s warm and buttery, it’s redolent of our own vast, sun-kissed cornfields and patient, loving hands in the kitchen. It satisfies and fortifies. In short, it’s heavenly.

Yes, brothers and sisters, I am talking about grits.

Can I get a witness?

Actually, all anyone has to do to get affirmation of the staying power of grits is open a menu. The once minimally adorned staple of diner- and home-cooked breakfasts has turned up on the bills of fare at haute cuisine haunts and trendy bistros alike. Pull up a chair and order a creamy bowl of pale yellow grits saturated with cream and cheese, or an al dente crisp-fried grits cake, or a bowl of white grits studded with sausage and puddled with shrimp sauce. As a rich side dish or part of a complex, layered entrée, increasingly, grits is what’s for dinner.

No two nouveau grits dishes are exactly the same, and yet every one touches a familiar chord.

“Yes, grits are trendy, but a lot of the things that are trendy now are dishes people grew up with and took for granted,” says Mark Jeffers, chef du cuisine at the Southern-themed Highball & Harvest restaurant at the Ritz-Carlton Orlando, Grande Lakes. “Maybe back then the ingredients weren’t treated as they needed to be so that they could be properly enjoyed. Look at collard greens. They were on every Southern table and they weren’t always held in high regard. They were a cheap crop and cooked without much thought. Grits are the same way. If the recipe says ‘start with a cup of quick grits’ you’ve got a problem.”

Greg Richie, co-owner and executive chef of Soco restaurant, agrees. “No matter what dish you plan to make with grits, you’ve got to start with great corn and once you find that, you’ve got to have a great grind,” he says. “I get my grits from a place in Georgia that grows organic corn and lets it dry in the field. When I need grits, I call the farm and speak to Alice and she tells her husband Tim what I need. He grinds it, packs it and ships it. I’ve been buying from them for a while, so sometimes we chat a bit before getting down to business. Developing those kinds of relationships with people is important, and it also results in great ingredients.”

The brand Ritchie uses in his Thornton Park eatery is called Red Mule Grits. The name pays homage to Jake, the red mule who turns the grinding stones at Alice and Tim Mills’ farm. Jeffers buys his grits from Anson Mills, a South Carolina grower and miller that specializes in stone ground heirloom corn. Other Orlando chefs swear by Bradley’s Country Store grits. Bradley’s—a miller, sausage maker and regional products retailer on the outskirts of Tallahassee—has been around since 1927 and claims a spot on the National Register of Historic Places.

Janet Bradley Parker, fourth-generation owner of the business, credits the big tent of the farm-to-table movement with reviving interest in stone ground grits in general, and her grits in particular. Out-of-state chefs with local roots stop in for provisions, greenmarket vendors around the Southeast showcase Bradley’s grits, word gets around and now, Parker goes through about 750 pounds of grits in a two-week period, all of it produced with the original grinding stones from the 1930s.

“My grits are coarse ground,” she says. “Coarse ground grits just tastes better. It takes longer to cook, but the result has more body and more flavor. We use whole kernel corn, so you get the heart of every kernel, not just parts and pieces.”

Bradley’s uses both yellow and white dent corn, so-called because when it dries, there’s a little indentation at the top of the kernel. Dent corn is softer and possesses a stronger corn flavor than the other popular dried-corn variety, which is flint corn. Flint corn dries into small, hard, round-topped kernels. Because it contains less moisture, flint is more resistant to freezing and stays fresh longer than dent corn. Popcorn is a variety of flint corn, as are most vividly colored calico corns. 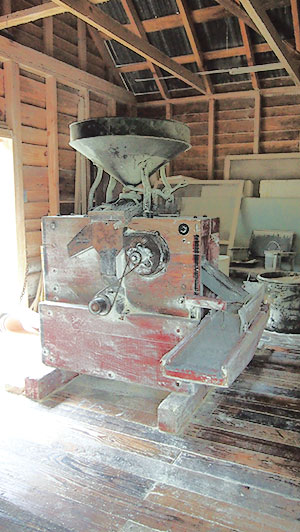 The grits mill used at Bradley's
Country Store, outside of Tallahassee

Regardless of which variety of corn is used to produce grits, most chefs insist on a stone ground product. “Stone ground corn doesn’t get as hot as corn kernels processed in a steel grinder,” explains Chef Richie. “Hot metal changes the character and flavor of the grits. Stone grinding gives you a product that tastes more like sweet corn.”

After finding the right grits and the right grind, those who seek the grail of perfectly prepared grits must be patient. Coarse, stone ground grits take 45 minutes to an hour to cook, unlike the 20-minute prep time for mass-produced, fine-ground, bleached and enriched grits. The ratio of liquid to grits is four to one, and Parker recommends rinsing stone ground grits in a few changes of cold water before cooking to remove any chaff from the milling process.

After that, the grits-Bible details are open to interpretation.

Frank Small, service manager of Tibby’s New Orleans Kitchen in Winter Park, says the restaurant keeps a pot of North Carolina-based Atkinson’s stone ground grits at the ready to fuel demand for the Cajun-Creole restaurant’s andouille-laced cheddar grits. “We make our grits from scratch every day, starting early in the morning,” he says. “That’s the only way. We cook it slow and make it with half-and-half to keep it creamy.”

Chef Jeffers maintains a long, slow cooking time but varies his recipe. “The time of day it’s being served dictates how I make it,” he says. “For lunch and dinner, our grits are prepared with half chicken stock and half heavy cream. In the morning, I just go with cream and butter because I want a milder flavor to pair with bacon and other breakfast dishes.” For cheese grits, Jeffers uses a blend of white cheddar and goat cheese. “The goat cheese adds a nice tanginess to the grits. It almost works as an acidic element. It adds creaminess but keeps the grits from being overwhelmingly rich.”

At Soco, Chef Richie is a self-described grits purist. “I don’t want to obscure the flavor of the corn,” he explains. “I use water to make my grits. Maybe I’ll add a little milk at the end if I’m going for a creamy finish. If you take your time and cook good-quality coarse ground grits over low heat for an hour, you’ll have a creamy dish that can stand alone or complement the flavors of whatever you’re putting on top.”

However one approaches the altar of Southern grits, the path to enlightenment appears to be through the trio of field-dried corn, stone-ground grits, and slow, patient cooking—and a willingness to spread the word outside conventional venues. After all, if a handful of cheese can rescue otherwise plain breakfast grits, imagine creamy grits serving as a nest for a braised lamb shank, or a foil for spicy chili, or as a fried crostini topped with smoked salmon and crème fraiche.

The A-maize-ing History of Grits

This article appears in the June 2015 issue of Orlando Magazine.
Categories: Food & Drink