Give the Gift of Beauty

Q Who pays for the bridesmaids’ hair and makeup? I would like my bridesmaids to have updos, and I am thinking of scheduling all of us at a salon the day of the wedding. It would be a really nice way for us to be together as a group. I’m just not sure if I should pay for all of them, or if each bridesmaid should pay for her own services.

A Good question, as there is a lot of gray area here. Traditionally, a bridesmaid would take care of her own hair and makeup, whether she did it herself or went to a salon. However, you mention that you would like your bridesmaids to wear a particular hairstyle. In my opinion, this tips the balance in favor of you paying for the salon. By the way, there’s no rule that says all your bridesmaids must wear the same hairstyle or even the same dress. You will want your bridesmaids to look their best, and you wouldn’t want to insist on a style that makes one of them uncomfortable, so check with them to be sure everyone is on board with your request.

Today, the group outing to the salon for hair, nails and makeup is increasingly popular, and it is a fun way for the bride and her bridesmaids to be together as “just the girls.” But before you schedule a booking, think about your bridesmaids’ budgets. Dress, alterations, shoes, accessories and travel, as well as shower and wedding gifts can add up quickly. An updo and makeup plus tip could run $100 or more per person. Ask the salon to give you an estimate, then talk to your maid of honor and ask her to poll the bridesmaids. If even one says, “Gosh I’d love to but…”, then I’d say drop the idea or, if you can afford it, treat them to the salon as your gift.

Q My fiancé and I have a number of relatives who live far from where we’re getting married. In this down economy, we’re worried that many of them won’t be able to afford the trip, but then would feel obligated to send a gift. Should we send them an invitation out of respect and affection, or would they think it an imposition? We also have some long-lost friends we’ve reconnected with on Facebook. Should we invite them?

A  While guests and gifts may seem inextricably entwined, let’s set aside your gift problem for a moment and focus on your guest list. For the long-somewhat-lost friends who live across the country or who are otherwise in and out of touch, consider sending a wedding announcement instead of an invitation. Sent immediately after your wedding, an announcement shares your happy news, but comes with no gift obligation.

Out of “respect and affection,” do send invitations to close relatives—parents, siblings, grandparents, aunts and uncles—even if they live halfway around the world. Most likely they will be pleased to be included, but hurt if excluded. Plus, they might surprise you and make the effort to attend. As you think about other relatives like cousins of varying degrees, you and your fiancé should consider whether an invitation or an announcement is the way to go. Check in with each of your mothers, who may have some insight. Bad economy or not, do invite your close friends; your wedding wouldn’t be the same without them, and they’ll surely want to be there.

As for your gift dilemma, take heart. Giving wedding gifts is such an ingrained part of our American culture that even if you made it known that you would prefer no gifts, some guests will give them anyway, out of love and affection for you. Remember, too, that the choice of a gift is always up to the giver, and a meaningful gift needn’t be extravagant. As for being accused of “fishing” for gifts, it’s unlikely a close friend or relative would consider an invitation to your wedding in that light. 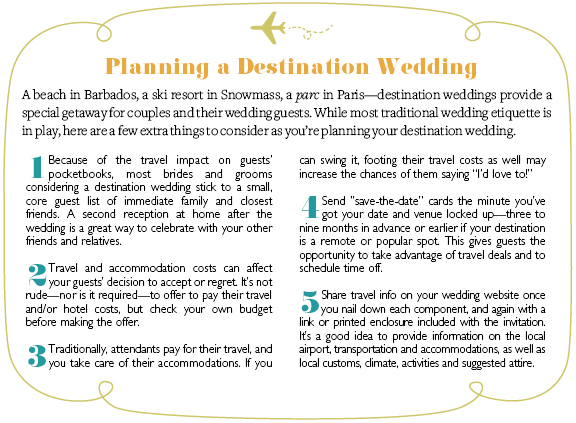 This article appears in the June 2012 issue of Orlando Magazine.
Categories: Venues & Guides