Go beyond Gator football and explore the countless natural wonders of Gainesville.

For many Orlando residents, Gainesville is the home of University of Florida football—and that’s it. For others, it’s a pit stop along I-75, two hours by car north of Orlando. And yet, this expansive college town, big enough to contain the third largest campus in the country, is home to some of the state’s most unusual wildlife and natural experiences, especially rewarding for those willing to pack hiking boots and binoculars for a glimpse of bison, bats, butterflies and more.

You don’t even need to leave campus for a couple such experiences. Start on Museum Road in the heart of UF with the Florida Museum of Natural History, and enjoy free admission to the permanent exhibits. Wander the halls of wonders that have been uncovered in the Sunshine State, including a collection of megalodon jaws found in the St. Johns River, and a mastodon recovered from the Aucilla River on the eastern edge of the Panhandle. There is a charge to experience the Butterfly Rainforest, where dozens of species, including long-tailed skippers colored brown and iridescent blue, alight on blooms and banana trees. 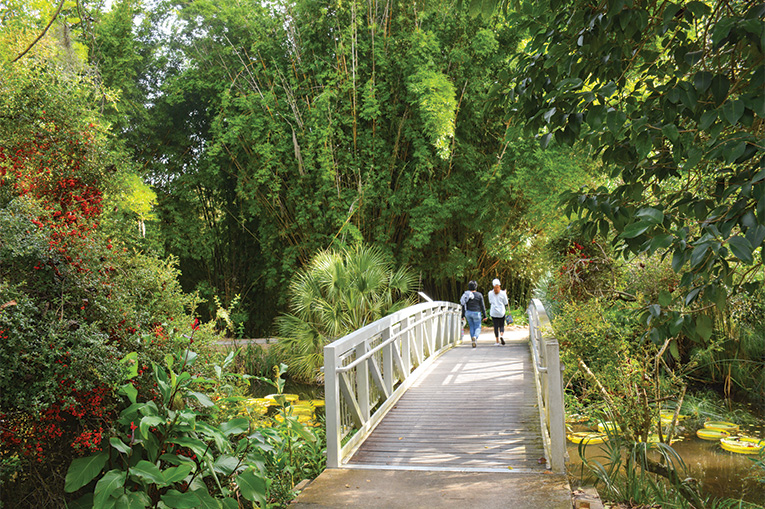 Few colleges can boast a colony of 400,000 Brazilian free-tailed bats that put on a nightly parade, as those at UF do. The bats originally called the football stadium home until the university constructed three “bat houses” on Museum Road across from Lake Alice, relocating the bats to keep them away from fans. The bat population at UF had swelled to an unusually large number thanks to the food (aka mosquitos) that is abundant among the area’s swampy location.

Although the bats may not sound like much of a draw, just wait until sunset. Minutes before dusk, grab a spot along the fence line as the colony begins to stream from the houses into a buzzing river of motion around the trees before reconvening over the lake.

Head to the opposite end of greater Gainesville for another bat experience few know exists. Lubee Bat Conservancy, started in 1989 thanks to a financial gift from Luis F. Bacardi of Bacardi Rum, only recently began offering tours to the public. The research center and nonprofit houses 200 fruit bats (also called flying foxes), plus an African spurred tortoise just shy of 3 feet in length, and a pair of Solomon Islands skinks. For a donation of $100 per group, visitors can meet the bats, but touching is not allowed. One of the highlights of this experience is Grace, a variable flying fox that once was someone’s pet. As soon as the door to her pen opens, she climbs across the wire-fence ceiling to greet newcomers.

If the group admission price is too steep, visit when the conservancy hosts its annual Florida Bat Festival in October. In addition to tours, the event includes a beer garden, bounce house for kids, raffle and much more to raise awareness for bats and money for ongoing research.

Perhaps the biggest draw is just south of town. Paynes Prairie Preserve State Park is famous for herds of bison and horses that roam the grasses and marshlands. Start with a visit to the ranger station for an update on where and when bison were last spotted. The easiest and most guaranteed viewing opportunity is just yards from the station: the 50-foot observation tower overlooking much of the prairie. From here, anyone can see most of the La Chua Trail as well as any herds in the surrounding area. Stay for a hike or mountain bike ride on paths such as Cone’s Dike Trail or the Chacala Trail, weaving through fragrant fields of grasses and wildflowers, hammock and hardwood forests. 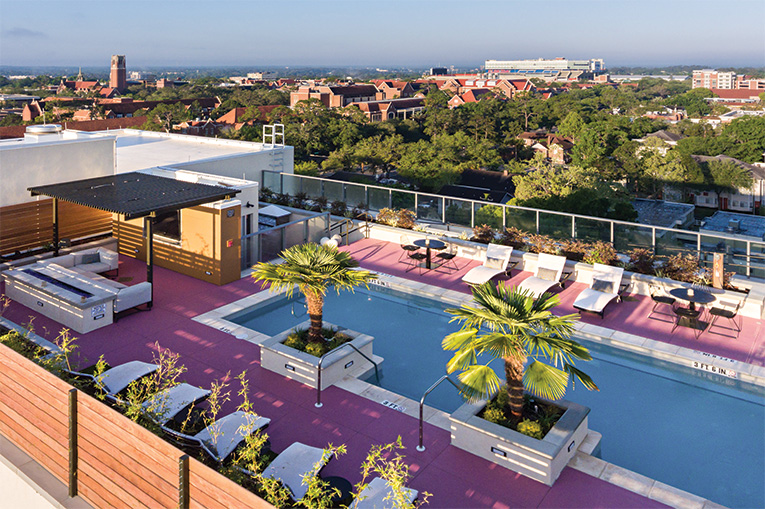 From the visitor center, it’s a 17-minute drive east to The Yearling Restaurant, so named for the novel written by author and early Florida settler Marjorie Kinnan Rawlings. Stop in to peruse the collection of animal taxidermy and stay for the Cracker cuisine, including smoked fish dip, free-range venison, frog legs and the custard-like buttermilk pie.

After a day of adventuring, take advantage of Gainesville’s eclectic restaurant scene. Satchel’s Pizza is equally satisfying for its hearty, deep-dish pizza as it is for its found-object art collection of trophies, wooden beads and trinkets displayed as mobiles and wall art. Diners can eat in the retro-styled main room, the garden, the back bar with live music or even in a Volkswagen Minibus. Or try Dragonfly, where the ever-changing menu of Japanese-style tapas includes a flatbread with sushi-grade tuna, red onion and a honey-wasabi sauce. The progressive city also boasts two local vegetarian joints. At Daily Green, choose from inventive salads such as the Thai peanut tempeh, or go for the walnut lentil burger in a waffle cone. Nearby, Civilization serves dishes from around the globe, from sweet potato enchiladas to Indian crepes stuffed with a veggie curry.

It’s all a little unexpected, from the 1980s toy Viewfinder at Satchel’s Pizza that doubles as the dessert menu, to the fact that a visit to a bat conservancy comes with a meet-and-greet with a giant tortoise. That’s Gainesville—and that’s what makes it such a delight to explore.

Reach Gainesville via a two-hour drive north of Orlando, taking FL-408 to the Florida’s Turnpike to I-75 N. For planning, check out visitgainesville.com

GARDEN STROLL
Kanapaha Botanical Gardens, a 15-minute drive southwest of the football stadium, are the second largest in the state, with an herb garden, hummingbird garden, bamboo grove and more. Spring and fall are the best times for encountering hummingbirds among the red ginger, soap aloe and firebrush. kanapaha.org