Good times are always on tap when they perform at Hollerbach’s Willow Tree Café.

It’s a Sunday evening—hardly a night typically associated with partying—and the crowd is overflowing at Hollerbach’s restaurant in downtown Sanford. About 200 people, some in traditional German garb, have come together for the beer and bratwurst, the sense of community and the lively music of Jimmy & Eckhard.

“It’s all about gemutlichkeit,” explains accordionist Jimmy Horzen, who has been playing at Willow Tree since shortly after it opened in 2001. His partner, native German singer and instrumentalist Eckhard Wachsmuth, defines the term as “a sense of well-being, of coziness”—of good company and good times. According to restaurant owner Theo Hollerbach, “Jimmy and Eckhard are the gemutlichkeit champions of the world.”

“For us, it’s like going to a party every night. You walk in here and, for the most part, everybody is happy,” says Horzen, who came to Orlando from California in 1982 to play accordion at Epcot’s German-themed pavilion after performing with polka legends Lawrence Welk and Frank Yankovic. 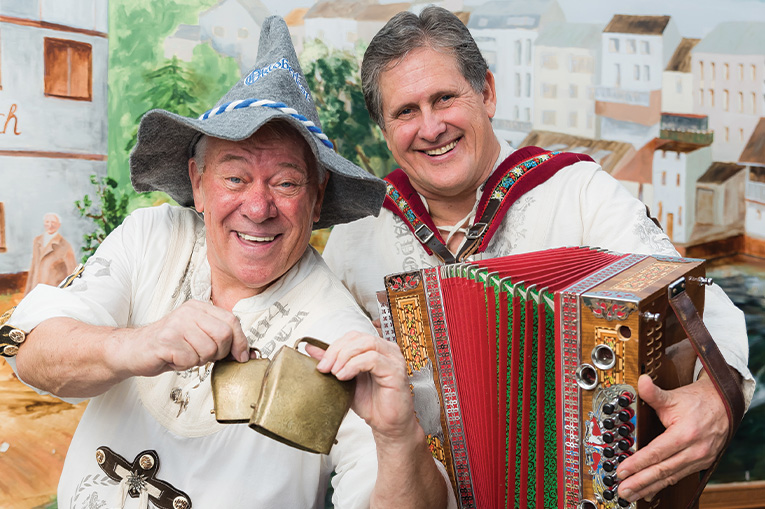 About 2003, Wachsmuth—a retiree whose only professional musical experience had been as a guitarist in a Beatles cover band—approached Horzen at the restaurant. “I snuck up on him and said, ‘Do you mind if I sing?’ That was the beginning of Jimmy & Eckhard at the Willow Tree.”

“What’s incredible about Eckhard is he has a natural harmony voice,” Horzen says. “And our voices blended.” Before long, Wachsmuth introduced a cadre of instruments: spoons, a saw, Alpine cowbells, an alphorn, a rub board and the equivalent of a German turkey baster.

The Lederhosen-clad duo went from performing one night a week to four—Thursday through Sunday—often filling the 300-plus seat restaurant to capacity despite two- to three-hour wait times on busy nights. For the restaurant’s Oktoberfest celebration this year, the duo plays Wednesday nights as well, in addition to some outside gigs.

For the many regulars, nights with Jimmy & Eckhard are like family get-togethers. “I used to be there four nights a week with my husband for Jimmy and Eckhard and the food,” says Lake Mary resident Beverly Parker. “Now my husband is ill, so I’m usually there just twice a week. Jim plays our favorite songs, especially ‘Unchained Melody.’ It’s just beautiful. He always announces, ‘This is for Beverly and Don,’ ” she says. “The Willow Tree is my support group.”

The act, which has recorded five CDs, has fans among members of the German American Society of Central Florida. Club members and cousins Kathy Erb and Dotti Brengal of Deltona can be found at their reserved table every week, although Erb is likely to find her way to the dance floor. “If you really want to have a good time, you go there,” she says. “It’s for all ages.”

Hollerbach adds, “Life is so much better while listening to Eckhard and Jimmy, singing and dancing along, and enjoying a beer or two with your friends and family.”