Catherine Walters,
Over the millennia, nothing has demonstrated humankind’s self-sufficient spirit and will to survive more than the ability to shoot its own food.

That proud tradition continues today in restaurants everywhere—albeit (sea?) bass-ackwards—as we shoot our food after it has arrived at the table, not with a bow and arrow or musket as our ancestors did, but with a smartphone.

Or so I thought, dear Sam-I-Am.

On a recent weeknight, my girlfriend and I were dining at the new Eddie V’s on Restaurant Row and had somehow saved room for dessert after devouring heavenly marvels like sea bass in a soy broth and Nantucket scallops. The Bananas Foster arrived and just before the waiter fired it up, he said: Get your camera ready for this. 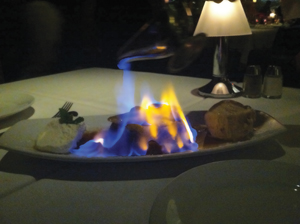 And, inexplicably, I did. In a culinary trance, I picked up my iPhone as the dessert caught fire, snapping photo after photo of the rising blue flame, as if I were capturing a momentous historic moment. Moreover, as soon as I returned home, I posted the best photo to Facebook and absolutely reveled in the 16 responses. They liked my food photo! They really liked it!

Before I took the plunge at Eddie V’s, I had asked dining critic Joseph Hayes to explore the world of “foodie fotophiles,’’ an odd cult of which I am now a part. And he found the most fascinating morsel: Chefs are getting in on the act too. Enjoy Joseph’s fun feature, “Say Cheese,’’ on page 72.

Steele also shares his five most memorable Magic moments (hint: Nick Anderson steals the ball!). And in RSVP (page 99), check out our photos from the opening of See Art Orlando, the magnificent display of eight sculptures that has changed the face of downtown.

Finally, don’t miss our overflowing bucket list of activities that is sure to give you adventurous ideas for the new year (“Live a Little! page 31). We cover everything from swimming with manatees to walking through a graveyard to spending a fortnight at the Fringe Festival.

There’s also an eating challenge on the bucket list—as in eating a six-pound steak in 75 minutes. So… get your camera ready.

This article appears in the January 2014 issue of Orlando Magazine.
Categories: Column