A  beer garden, translated from the German word, is an open-air establishment that serves beer— and lots of it. But the Milk District’s new watering hole, Barley & Vine Biergarten, offers much more than just a lengthy menu of brews. Here are five reasons it’s easy to grow fond of this new gathering spot: 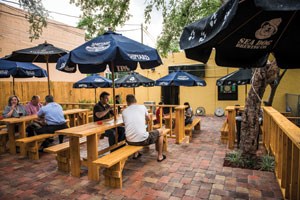 The outdoor patio. Rows of handsome wooden tables outfitted with enormous umbrellas for shade line the brick-paved patio, the first spot people rush to after grabbing a beer from the indoor bar. “The patio is our focus,” says owner Gabe Ratliff. “We’re in Florida. We can enjoy that area year-round. There’s something right about drinking a cold beer outside on a hot day.” Up to 100 people can fit outside comfortably, whether they’re taking a seat covered by a puzzle piece-shaped cushion, or standing to mingle and shoot darts. Customers are invited to bring their dogs, as long as they’re well-behaved and on a leash.

The massive selection. With 25 beers on draft and upward of 125 bottled, there’s truly something for everyone. New kegs come in throughout the week, and the bar leans toward serving what’s in season. Expect to see lots of hop-forward IPAs, Belgian ales, and wheat-heavy brews during the summer; and the knowledgeable staff can tell you all about their choice ciders, malts, barleys, wines and sakes if you feel like being adventurous.

The sense of community. “We encourage people to put down their phones and have live conversations,” says Ratliff. He’s achieved this through the furniture—all of the tables hold up to 10 people, meaning “you may end up sitting next to a stranger, and that’s okay”—and the dozen board games found around the bar. A few crowd favorites are checkers, chess, Pictionary, Battleship, and Cards Against Humanity, and people in their mid-20s can often be seen hunkering down over a game with a competitor twice their age. Says Ratliff: “The amount of diversity was the best surprise. The Milk District gets kind of a hipster reputation. But we see a population that’s so much more that that.” 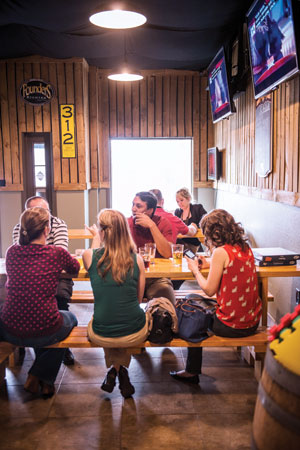 They want your feedback. My first time at Barley and Vine, I asked if there were sour beers available. There weren’t. “But we’ll keep it in mind,” said my bartender, Devan. When I went back a week later, there was a sour brew being tapped, and a bottled sour was in the fridge. “We want to hear what people want,” says Ratliff. “Someday I’d like to have a suggestion box. But that will come when we’ve got it all figured out, hopefully in the near future.” And a bright future it is.

This article appears in the June 2014 issue of Orlando Magazine.
Categories: Nightlife & Bars