No matter what era of home, the basic elements of landscape design can enliven its outdoor space.

The two homes pictured here couldn’t be more different: One is a century-old Victorian in downtown’s Lake Eola Heights neighborhood, and the other is a streamlined neo-contemporary manse in Winter Park. But despite their differences, both share a time-tested formula for beautiful outdoor spaces: water, hardscape and plantings. Together, these three elements work harmoniously to create an interplay of texture, movement and color that pleases the eye and refreshes the spirit.

<< Proportion and geometry play a key role in the back-yard of this Winter Park home owned by Andy and Mai Swanson. A long, narrow lot dictated the pool’s rectangular dimensions; the pool’s notched corners pay homage to the classic Grecian-style silhouette. The pool’s brick decking extends to the home’s shaded lanai and squares off around planting areas. Palm trees, potted plants and manicured hedges provide a softening counterpoint to the abundance of hard edges and 90-degree angles here. 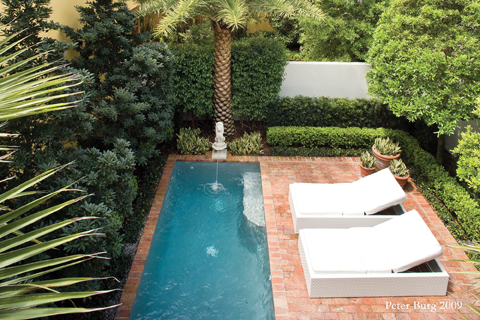 ^^ The lion fountain underscores the pool’s subtle classical motif while bringing motion and sound to the outdoor space. These understated nods to tradition provide an elegant contrast to the home’s more modern architecture. 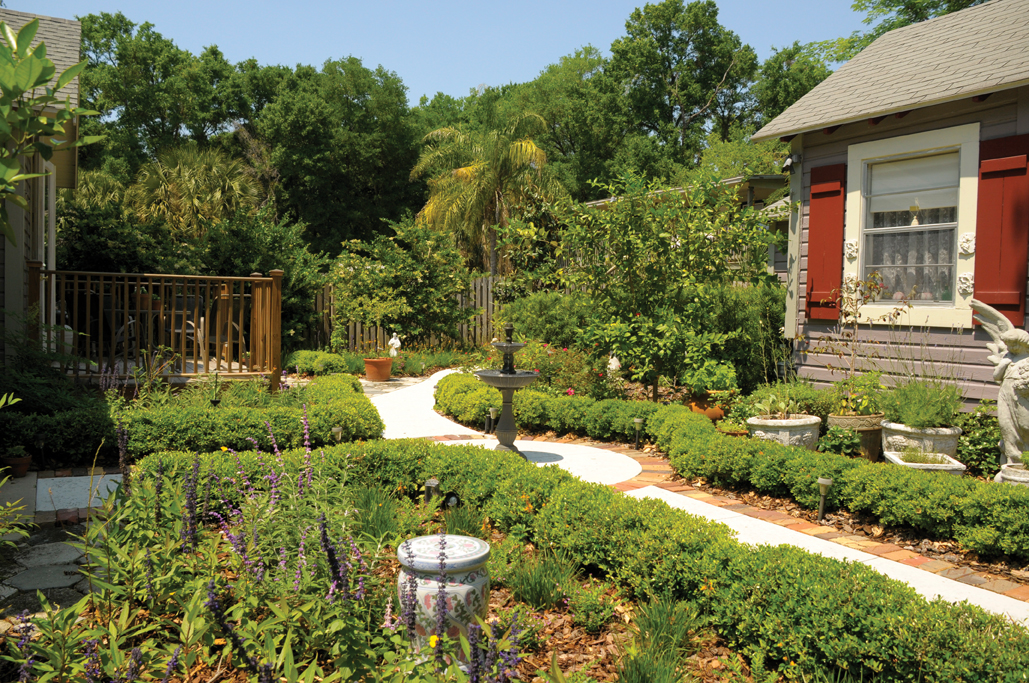 The garden (above) of this 100-year-old downtown home owned by David and Diane Martens is sandwiched between the main house and guest cottage, which was originally the home’s kitchen. (Florida’s building protocol of the day often separated the kitchen from the home, both to keep the home cooler and to prevent potential house fires.) The garden’s hardscape incorporates bricks salvaged when some of Orlando’s brick streets were pulled up and paved, as well as hexagonal pavers that were used in the city’s first sidewalks. A variety of blooming and fruit-bearing plants add color, texture and scent to the garden. While there may not be room for a pool here, water still plays a role in the backyard’s ambiance. The fountain (below) serves as the garden’s centerpiece, and the splashing water is a simple and ingenious way to mask the sound of traffic on the area’s often busy streets. 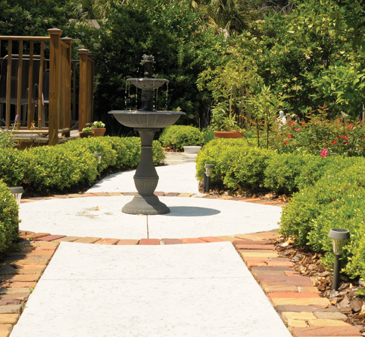 When the new Nemours Children’s Hospital in the Lake Nona area began to plan its interiors and consider the aesthetics of patient rooms (right), it assembled an unconventional group of consultants that could provide real world advice—the parents of hospitalized kids. And the suggestions the parents gave were sometimes surprising.

For example, the hospital, which is scheduled to open in fall 2012, had planned to include bright, energizing colors in the interiors. But some parents of children with conditions such as autism vetoed that idea, saying bold hues could be unsettling to their kids. Instead, a softer palette of green, orange and blue was selected.

Another parent-inspired design tweak affected the ceiling panel over each of the 95 inpatient beds. Originally a glossy, reflective white, the material was changed to a matte finish so that children wouldn’t see themselves (and any attendant tubes, wires, bandages or other medical equipment) mirrored above. Children can change the color of the ceiling’s lighting to a variety of colors depending on their mood and preferences; outside the hospital, the children’s various color selections will be visible through the floor-to-ceiling windows, bathing the building in a rainbow of hues.

The hospital’s color scheme is picked up in the whimsically patterned upholstery that covers each room’s sleeper sofa—a welcome feature for parents who stay overnight.
—DBE

Color of the Season

Wondering what’s hot for summer outdoor furnishings? Cool blues are big news for the season—and what a great hue to add a splash of color outside. Alfresco Home’s Blue Hawaiian Margarita Bistro set is compact enough to fit on a balcony, but is equally at home on a larger deck, porch or patio. $460 at homegallerystores.com

This article appears in the June 2011 issue of Orlando Magazine.
Categories: Fashion & Shopping