2 siblings find a way to unite their community after a pet’s shooting.

When 10-year-old Liam Goodowens and his 8-year-old sister, Claire, learned of the shooting of a favorite dog in their Winter Park neighborhood last August, the home-schooled siblings took it upon themselves to bring their shattered community back together.

A 70-year-old neighbor had shot a Samoyed mix named Lilly in the eye, saying he was acting in self-defense after the dog raced toward him aggressively while he was taking a walk. Lilly lost the eye and residents took to the streets to protest; no charges were filed.

For Liam and Claire, the unsettling scenario became an opportunity. 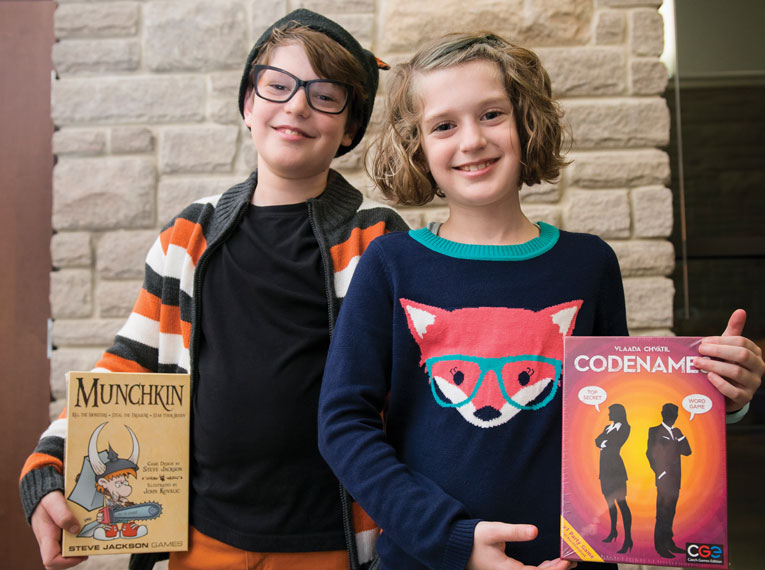 Liam and Claire Goodowens are focused on the idea that playing board games can bring people together.

The kids thought about launching a Little Free Library book exchange program. But soon Liam had second thoughts: “At that time, I was reading a 7-book series. I said, ‘I haven’t been socializing.’’ He realized he needed a plan to bring people together instead of isolating them.

Claire, now 9, remembers the idea’s inception differently. “It was kind of all our ideas combined, but Liam always takes all the credit. We’re both co-founders.”

Under their mother’s direction, the kids created a business plan for their program, which they call The Game Exchange. The premise is simple: People take a board game from a designated box in the community while leaving another in its place. Games should include instructions and all necessary pieces.

Liam and Claire wrote business letters and presented their plan to potential sponsors. By the fall, they had been awarded a $500 grant from community-planning group Vision Winter Park and had secured another sponsor, Cool Stuff Games in Maitland and Waterford Lakes, to make and accept game donations.

“The city had all these newspaper [boxes] that were in really bad shape, and they said we could have them if we wanted,” Samantha says. “My husband and I work in film production, so people from the film community came out, helped the kids rehabilitate the boxes, paint them and fix them up.’’

Game Exchange boxes have been placed at Phelps Park, the Winter Park Public Library and the city’s SunRail station. Several others are in the works, including one at a Longwood medical office.

Samantha’s best friend, Elizabeth Bernbaum, has cheered on the Goodowens family and was one of about 175 people who attended a community game night the family hosted at the Winter Park Community Center with the help of Vision Winter Park, Cool Stuff Games and other sponsors. The game night—complete with food vendors—was what the Goodowens family hopes will be the first of many.

At the event, Bernbaum, her husband, Lee, and their two children—Georgia, 13, and Sam, 10—joined Liam and Claire’s father, Jason Goodowens, in a game of Camel Up in which toy camels race around a pyramid. Other parents and children munched on kale salads, empanadas and cupcakes while huddled over games such as Takenoko, which involves cultivating imaginary bamboo plots and feeding hungry pandas. But families weren’t the only participants. In the back of the room sat a table of adults, including a professional Dungeon Master.

Learn more about The Game Exchange at gameexchangebox.org

This article appears in the May 2016 issue of Orlando Magazine.
Categories: Community
Tags: board, Community, dog, games, kids, shooting, siblings