Fun and Games at Joysticks Orlando

Prepare to geek out over the arcade games and candy-inspired cocktails at Joysticks.

Nostalgia abounds at Joysticks Arcade Lounge & Retro Bar, a gamer’s paradise that will have you time-traveling back to the 1980s—the heyday of Ms. Pac-Man, Frogger and Missile Command. Here are four reasons to visit the downtown hot spot, filled with video games, movie memorabilia and a collection of colorful characters. 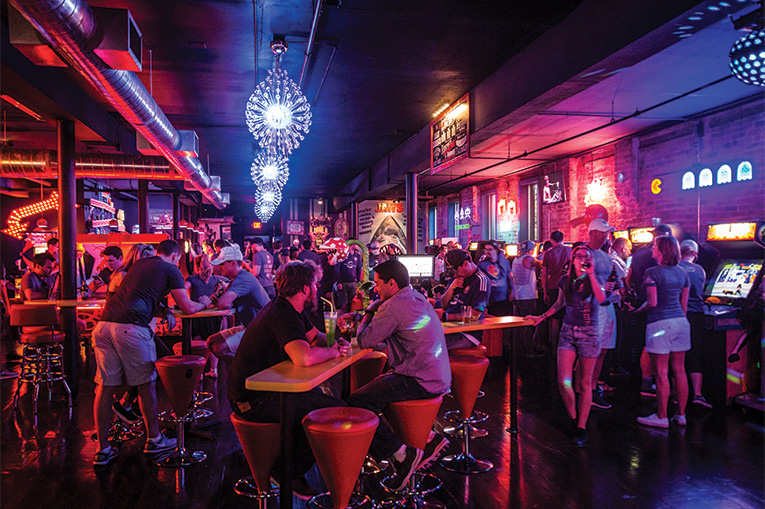 1. The novelty. Say hello to owner/manager Addie Hassel and Jeffrey Stelter, the bar’s design consultant. Both had long searched for a fun ‘80s-style bar, but when they couldn’t find one, they did the next best thing and opened Joysticks. The staircase wall leading to the second floor combination bar-arcade is painted with glow-in-the-dark characters from throwback movies and TV shows and toys, like Ghostbusters villains, Care Bears, Smurfs, and a floating Rubik’s Cube. A prominently placed Piranha Plant from Super Mario Bros. and a bright orange Q*bert come to life, bathed in the glow of neon signs hanging from above, while enthused patrons jostle video games in hopes of winning.

2. The games. They’re free! Arcade classics like Donkey Kong Jr., Pac-Man, Tron, Space Invaders, Mario Bros., and nearly a dozen more are lined up between a Jaws-themed lounge complete with seating designed to look like the toothy maw of the shark, and a small stage that hosts live bands on various weekdays. Feel the need for speed? Next to a designated PlayStation and Xbox hub, where you trade in your ID for an old-school controller and couch seat, there’s an air hockey table.

3. The lounge areas. These areas are as authentic as anything at Disney. Haunted Mansion lovers can relax on a spooky purple sectional under a sign that reads “Tomb Sweet Tomb.” Across the way, a hot pink Barbie-inspired chaise sits adjacent to a VIP Star Wars Light Saber Lounge. Last, a Never Say Die VIP Lounge dedicated to The Goonies hosts the skeleton of One Eyed Willie, who has his own seat under the movie’s map, illuminated by yellow candlelight. The VIP lounges are available for private parties. 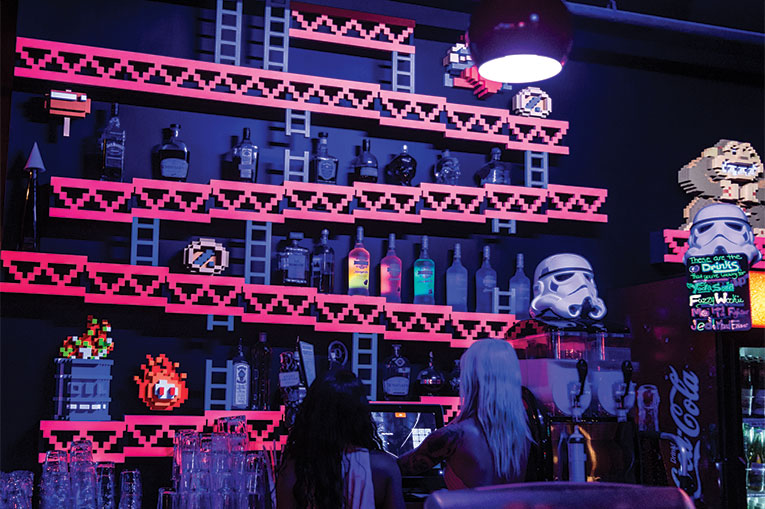 4. The drinks. Pour some sugar on me, indeed. Candy-inspired cocktails range from refreshing—the Shark Attack, made with Absolut Citron and lemonade and garnished with shark gummies; and Weird Science, made with Jack Daniels, Midori liqueur and ginger beer that magically bubbles when served—to saccharine—the Malibu Barbie, a concoction of coconut rum, peach and orange flavors and topped with glitter; and the Truffle Shuffle shot, with Absolut Vanilla, butterscotch schnapps and Kahlua (making this one reminiscent of a Baby Ruth candy bar). These clever creations are served on a Monopoly game-tiled bar by Hassel’s “sockstars,” bartenders who are dressed in vintage athletic socks, track shorts, crop tops and fanny packs. The bar also offers a more down-to-earth craft beer menu.

Go once, and one thing is for sure—you’ll be back.