Q: Is a camera hidden inside the birdhouse atop the traffic light at Robinson Street and Bumby Avenue?

A: Answer Man was primed to break the story of the century: that Big Brother—or Big Bird—has been watching motorists from a cleverly disguised eye in the sky for decades, with the evil empire coming into its own only recently by targeting red-light runners.

No such luck—it’s really just a birdhouse. All red-light cameras in Orlando are in plain sight, says Steve Jones, the city’s traffic operations manager. The  little birdhouse has a fascinating history nonetheless. One story has it that the original house was put up in the 1940s by a city worker who felt bad about having to destroy nests that birds built around the signal. Another account says that the Audubon Society installed the diminutive dwelling in the 1950s.

Whatever the case, there have been several versions of the house because of wood rot or destruction by hurricanes. But it’s never been down for long because residents start squawking if they don’t see it after a few days. 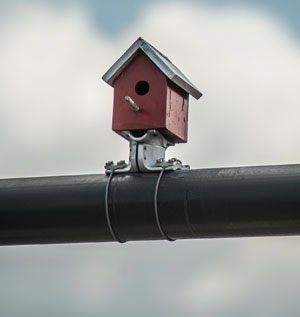 “It’s basically been a tradition to have a birdhouse at that intersection, so we just keep it there,’’ Jones says. The current red-and-white house was built by traffic signal technician Scott Fulkerson about four years ago from scrap lumber he had around.

But these days, the house may be more satisfying for humans than sparrows or wrens.

“The people I’ve talked to haven’t really seen any birds using it,’’ Jones says. Instead, the feathered friends tend to favor nearby wiring boxes for the signals as places to start a nest.


Q: Did the University of Central Florida recently change its address?

A: Answer Man has always considered finding any building at UCF equivalent to navigating a tortuous circle of hell, and it’s no wonder: Up to now every structure on campus has borne the same location: 4000 Central Florida Boulevard. Good luck with that on Google Maps.

But a few weeks ago the university renamed about 20 streets and assigned individual numbers and streets to all edifices on the main campus, in keeping with a new law for state building addresses. So emergency personnel, delivery people and just regular folks all benefit. The official address—the location of the visitors’ office—is also changing, from 4000 to 4001, because it’s on the side of the street that uses odd numbers elsewhere in the county.

So now you can enjoy tooling along the likes of new thoroughfares  like Mensa Lane, Knights Victory Way, Home Run Court and Scholarship Drive. Hmm, those may not register very high on the Hip Meter, but when you’re about to assume the crown of biggest university in the country, you can name your roads anything you want.

This article appears in the June 2013 issue of Orlando Magazine.
Categories: Community