St. Pete’s pier is a new design for the 21st century with green space, restaurants, and a massive art installation. 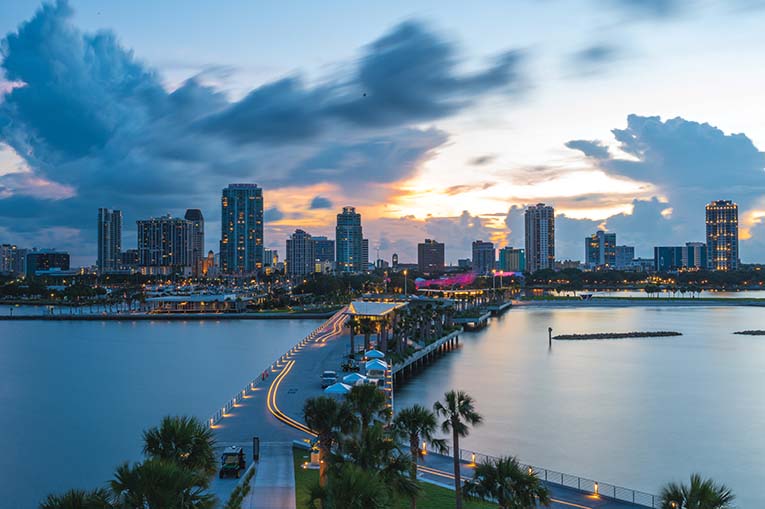 A sunset view of the new St. Petersburg Pier from the Point redefines the city’s skyline. (COURTESY OF VISITSTPETECLEARWATER.COM)

The aerial sculpture titled “Bending Arc” is longer than a football field and higher than a circus tent. Its amorphous shape billows and ripples with the wind; its high-tech fibers reflect the changing light of day and pulse with LED-colored lights by night. International artist Janet Echelman’s largest aerial artwork shimmers over downtown St. Petersburg’s yacht basin as a bold signal to residents and visitors alike that the new St. Pete Pier is finally open.

A departure from the traditional runway-style design of former piers—including the last one that closed in 2013—the St. Pete Pier was reimagined for 21st century living. Its architects and stakeholders envisioned an over-water district built with modules for dining, recreation, entertainment, shopping and education. “I wanted to take down the chain and re-create a pier that is inviting for residents and visitors,” says St. Pete Mayor Rick Kriseman. “We had to build a Pier District with great restaurants and world-class art; where families can hang out and have fun on the playground or splash pad, and where everyone can find some of the best views in the city.” Check, check and check.

Landscape architecture, public art and an electric tram system connect the district’s individual components. The 26-acre district is equally suited to large-scale gatherings or personal quiet time. Whatever your jam, there’s space for it while socially distancing. 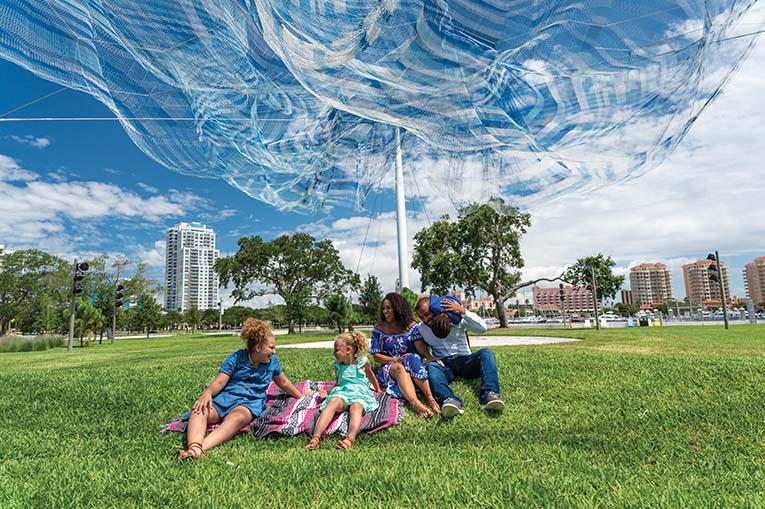 “Bending Arc” is an aerial sculpture that responds to wind and light (COURTESY OF VISITSTPETECLEARWATER.COM)

Enter at 2nd Avenue North, behind the Museum of Fine Arts, where 17 vendors bring local flair and flavor to the weekend Marketplace. Say “yes” to a bag of cashew brittle by Son’ni Boi & Petal. Consider the craveable candy part of your tasting tour of the new district, where you can also carry an alcoholic beverage, as long as you bought it on the pier.

First up is the Family Park where “Bending Arc” looms as a playful sentinel. The site itself once hosted peaceful protests, leading to the 1957 U.S. Supreme Court case that opened up the use of municipal beaches and pools to all citizens. Echelman’s title is a nod to Martin Luther King Jr.’s words: “The arc of the moral universe is long, but it bends toward justice.” The artist says it speaks to the welcoming and inclusive intention of this park.

If Echelman is in town, you may spot her relaxing in a hammock near her sculpture, sipping an Arc Bender cocktail from the Spa Beach Bistro, and watching how others interact with the sculpture. “As an artist, I consider the work completed with the visitor,” she says. “Each person finds meaning that speaks to their own life.”

Nearby, kids and grownups climb in, on and through a giant octopus at the center of the aquatic-themed playground. Beside it is a splash pad with jets that light up at night. Parents can stake a claim at one of Spa Beach Bistro’s shaded outdoor tables between the play spaces. Kid-friendly faves such as design-your-own-pizza and chicken tenders make it easy to feed a family without any fuss.

The Tilted Lawn is a significant landscape feature that looks much like it sounds. If you hear strains of live music while snapping your Titanic-themed “I’m the king of the world” selfie at the top of the tilt, then it’s time to head over to Doc Ford’s Rum Bar & Grille for a plate of its addictive Yucatan shrimp, drenched in a spicy garlic butter sauce and served with French bread so you can soak up every drop.

Don’t move on until checking out Mayor Kriseman’s favorite secret spot. Look for a pathway that crosses under the Tilted Lawn toward Doc Ford’s. “It’s out of the sun, away from people and has a terrific view of the bay,” says Kriseman. “It’s a great place to watch for dolphins or stingrays.” 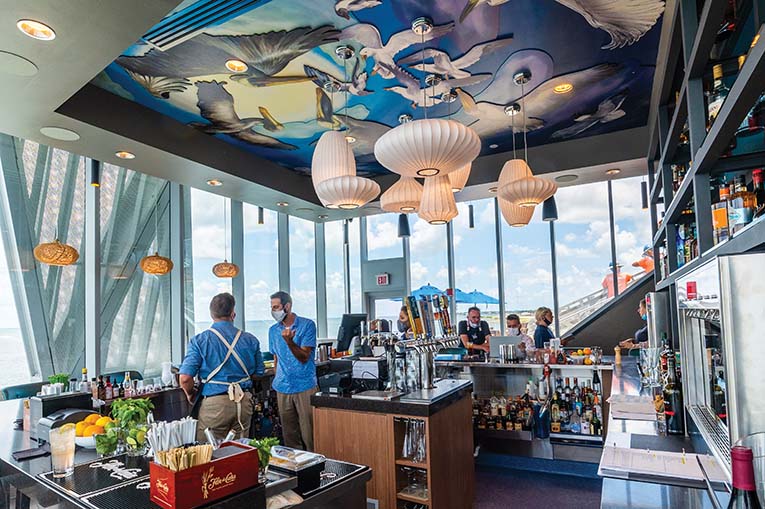 Pier Teaki is the rooftop bar at the Point (COURTESY OF VISITSTPETECLEARWATER.COM)

“Before the shrimp are on the plate, they start out in the water of the Tampa Bay area,” says Tampa Bay Watch Discovery Center executive director Dwayne Virgint, who is adept at connecting the dots between human activity and marine ecology. The new activity-based museum and aquarium is located midpoint on the pier. The tram stops right outside the center’s outdoor Wet Classroom, where you can see the original pilings from the 1926 pier. “They were kept because a number of species live and grow on them,” says Virgint, “such as oysters, sea urchins and barnacles, which help clean the water and feed other marine life.” Through hands-on exhibits and programming, “we tell the story of the recovery and ongoing preservation of Tampa Bay, and why this environment matters,” he adds.

The end of the pier is called the Point and comprises a vast lawn, the fishing deck and an angular steel and glass structure that seemingly balances atop a grassy hill. Each level is larger than the one below; the steeply sloped shed-style roof blocks the harsh sun for rooftop-bar revelers. Come dusk, triangular ceiling panels light up from within, transforming this stunning structure into a modern-day beacon drawing visitors to the Point for 360-degree views of St. Pete and Tampa Bay.

Driftwood Cafe at ground level is for grab-and-go coffee, breakfast and lunch. Upstairs, Teak on the St. Pete Pier is the marquee restaurant with a seafood menu and an upscale-casual setting where floor-to-ceiling windows ensure every diner has a view. Pier Teaki is the magnificent rooftop bar. It provides an idyllic perch from which to look out over the pier district and view St. Pete’s 21st-century skyline. 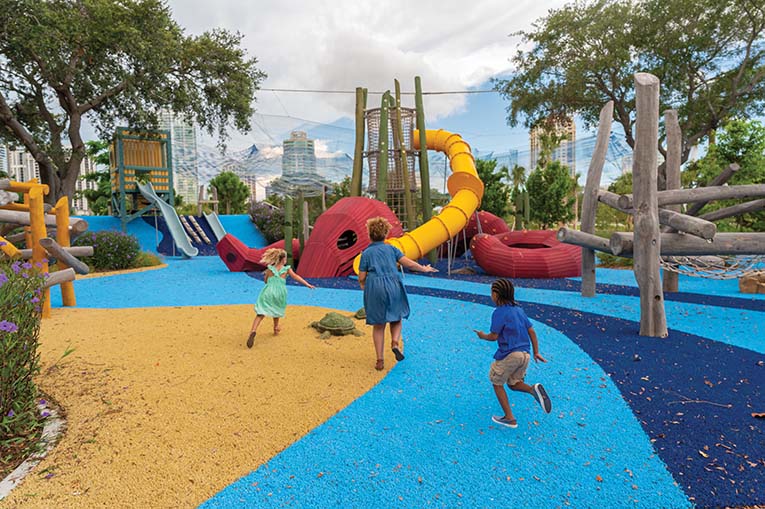 The playground is made from all-natural materials (COURTESY OF VISITSTPETECLEARWATER.COM)

The St. Pete Pier opens every day 30 minutes before sunrise and closes at 11 p.m.; the playground and splash pad close at 10 p.m. The pier is pet-friendly, but leave your pooch at home if your plans include visiting the splash pad or Spa Beach. A free electric tram makes the pier accessible to all visitors. stpetepier.org

The Vinoy Renaissance St. Petersburg Resort & Golf Club and The Birchwood Inn are worthy of a St. Pete getaway. The Vinoy is a storied 1925 hotel with Chihuly glass chandeliers in the lobby and a speakeasy located beneath the staircase. The Birchwood is a modern boutique hotel housed in a 1924 historic building with a sexy rooftop lounge called the Canopy.

The Dali Museum, just a few blocks south of the pier, is abuzz as the first North American museum to host the immersive, multisensory “Van Gogh Alive” exhibition, as seen in the Netflix series “Emily in Paris.” The exhibit runs through April 11. thedali.org