Flipping Out in Florida

A behind the scenes look at Orlando’s house flipping industry. 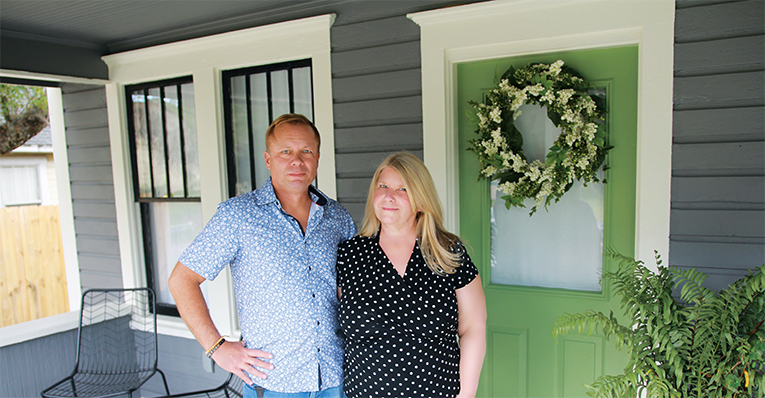 “Flipping Out,” “Flip or Flop,” “Property Brothers.” How many of us have watched one of these popular do-it-yourself house flipping shows and thought, “I can do that.”

Since the debut of the A&E show “Flip This House” in 2005, house flipping shows are big business, featuring airbrushed flippers with seemingly unlimited money, resources, and supplies. Orlando is where some of these house flipping shows are filmed.
Reality shows have nothing on the real-life stories of house flippers. As dramatic as the reality shows try to make it look on screen, the actual story is infinitely more interesting.

We’re pulling back the curtain on the house flipping biz to give you a behind-the-scenes glimpse of this fickle but fun enterprise.

It was the perfect flip. It ticked all the boxes. Located in the desirable Dover Shores neighborhood. Check. Mid-century modern home. Check. In dire need of renovation, but no structural issues. Check. A lush backyard with a garden oasis. Check.

“That’s when we realized the garden was a pool,” explains Dianne. “They never mentioned there was a pool when we bought the house. The previous owner’s husband was blind. To prevent him from accidentally falling into the pool, she filled it in with soil and planted a garden.”

In a plotline worthy of Jeff Lewis’ “Flipping Out,” husband and wife team Dianne and Don Moore went to work. The addition of a pool to a Florida property increases the asking price by 5 to 8 percent, which could mean an additional $30,000 to $35,000 profit.

If this were a reality show, this would be a cliffhanger-worthy situation. Did the roots dig into the pool’s lining? Will the cost of the pool restoration exceed the profit? Stay tuned for the next episode.

“Our work gained some recognition and a social media following,” explains Don Moore. “We caught a team member’s attention working on a nationally recognized renovation show. They have featured five of our reimagined and renovated houses on the show.” 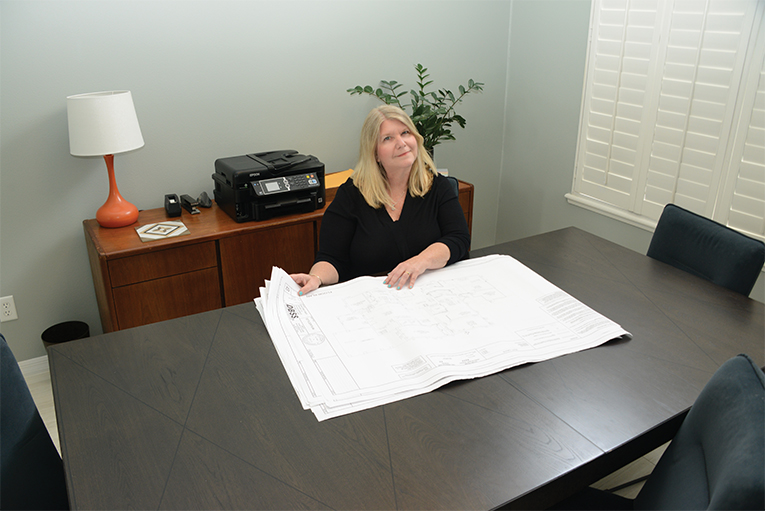 Most psychiatrists prefer not to be called a shrink. House flippers prefer the term “house renovators.”

“They sometimes use flipping as a derogatory term,” explains Dianne. “Flipping means people that buy a house in probate and do a quick flip to an investor. Or someone that paints and covers things up for a quick dollar. Flipping is a negative term. We consider ourselves renovators.”

One thing that all the house flippers, I mean renovators, have in common is their dedication to the artistry of renovation. It’s more than a paycheck; they have a love of the process. “Seeing the transformation, envisioning it, and then seeing it come to fruition, it’s extremely satisfying,” says Dianne.

When you talk to a home renovator, they always remember their first project.

Dianne was living in Maryland at the time of her first project. “It was just before the housing crisis when the prices were going down. We lost money on our first house. It was horrible, but we learned a lot.”

Dianne persevered while most people would cut their losses, walk away, and chalk it up to a lesson learned.

“It’s just something that I always wanted to do, so I stayed with it. I always tell people in the industry, ‘If you learned something on your first one, then you’ve won.’”

There is a sense of camaraderie, of kinship between house renovators. “I don’t see other flippers as competitors,” Dianne says. “More like colleagues. I’m in the business, and I don’t have traditional work friends or office get-togethers. There’s a certain kinship that is shared.”
MEP Realty Investments 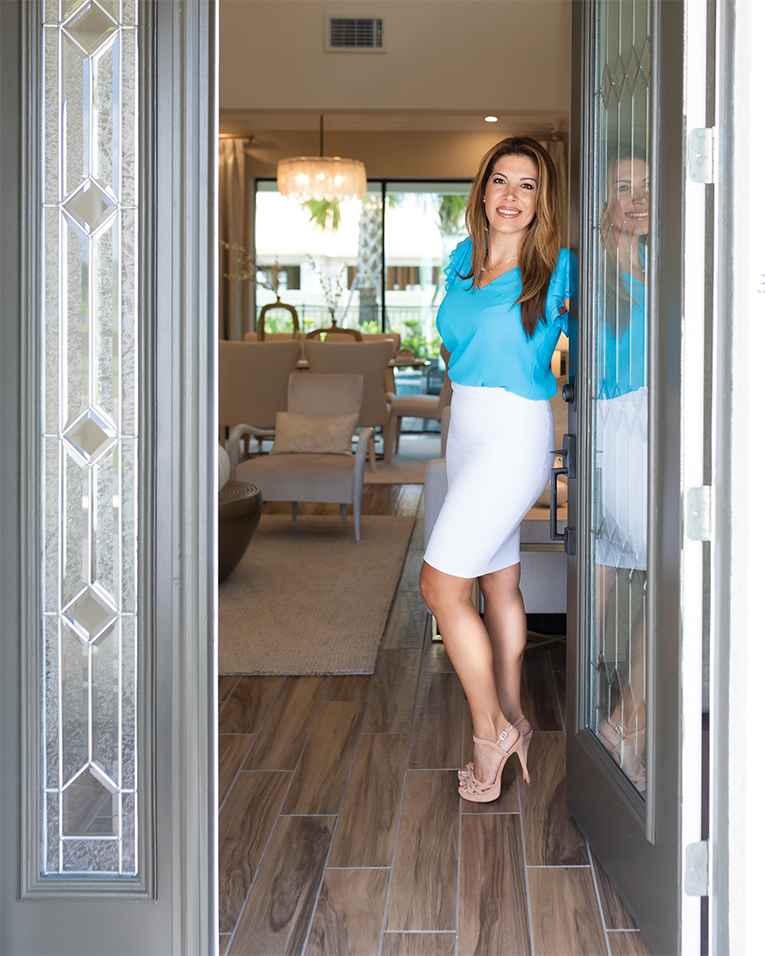 One local renovator, Maria Elena Perez, agrees with Dianne. “I consult with other flippers. I have a colleague in South Florida who was doing a flip, and I consulted with her through the process. She made $100,000 on that property, which is very rare, all within four months.”

The statistics vary, with average profits ranging between $30,000 and $75,000 per flip. With real estate prices at an all-time high, the renovation market is strong.

Originally from Colombia, Maria Elena’s mother moved to the United States to give her a better future. “She raised me in Miami, and then 16 years ago, right before the market crash, I came to Orlando to start my real estate career.”

All the house renovators interviewed have one thing in common, and they did not enjoy an easy beginning. Maria Elena began her career just as the market was about to crash. “It was nerve-wracking and brought financial hardships, but I wouldn’t change anything. Thanks to that experience, I am where I am today.”

Maria Elena has an affectionate nickname for her first home renovation. “The first one I did, my friend called it the ‘Chucky house.’ It was like a horror movie house. The owner was a hoarder with no central air conditioning, and they were a smoker. My first one was a challenge.”

The “Chucky house” taught Maria Elena essential lessons about the industry. “I learned that the real estate business is all about curves.”
Despite the initial challenges, Maria Elena is proud that she didn’t quit. “I’m of the mentality that there has to be a way, a solution. It takes a lot of perseverance and reaching out to other people in the industry that have done homes. It’s important to reach out to your support group, to other people in the industry, to get answers.”

While being a renovator requires strong business and organizational skills, it also requires creativity. “I thought I was far from an artist, but art comes in different forms. I love the creative aspect of renovating a home.”

Maria Elena’s favorite thing about flipping is the act of neighborhood revitalization. “It’s not even the money for me,” she admits. “It’s the satisfaction of making something ugly into a beautiful home, then having people walk in and love what you’ve created.”
JAK Home Design 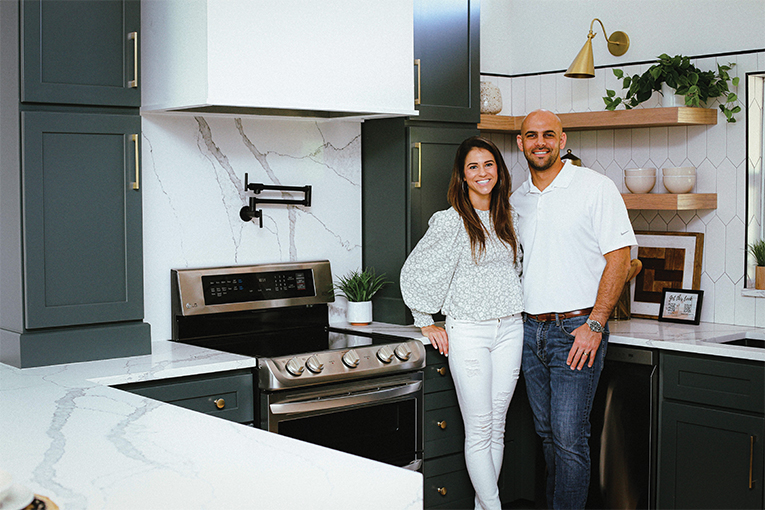 Karey started her career as a CPA but always had her eye on house renovation.

My husband and I have always been drawn to the industry, but we come from financially conservative families. We had a very long route into the real estate industry. This risk-averse accountant was waiting for the perfect opportunity to leap, and that never exists.”
It was a friend of her husband that pushed Karey and Josh into renovations. “One of my husband’s best friends lived in the area and decided he wanted to get into real estate investing but did not know what to do after buying this disaster of a house. He hired us to flip his house, which was my perfect, mostly risk-free situation.”

Karey and Josh tried and found out that they enjoyed the work and were good at it. “About halfway into doing his house, we realized we weren’t terrible at it, and we enjoyed working with each other.”

The first flip was a long process, but Karey loved it, “It was a great learning experience, definitely some highs and lows, and for the first project, we encountered a lot. I think it also gave us the courage to try another one.”

Karey loves including extra touches in her homes and things that make the home special.

We made every attempt possible to put in all the amenities that we would have wanted in our own home. The wall in the kitchen had plumbing, so I put in a pot filler. It’s these small touches that can have a big impact.”

“People always say, ‘Don’t overdesign for an area. You want to do as much with as little as possible.’ But I think that is an adage that is no longer relevant. We’ve had so many buyers coming through and saying, ‘We appreciate all of this extra attention to detail,’ and, ‘This is the prettiest home we’ve seen.’ Both homes have sold significantly higher than the highest in their area.”

Now that Karey and Josh have dipped their toe into the renovation business, will they continue to renovate?

“This opportunity has allowed us to figure out our path and find those neighborhoods that can afford a high-end renovation. It’s fun to experiment and push the limits. I think that was a pleasant surprise for us.”

Moore to the Story

Dianne Moore had the renovation “bug” long before her first project. “It was before I even got my real estate license in 2006. I would say I got the idea at least five years before that.”

“I have always had a thing for architecture, even in high school,” she explains. “I started out drafting and then went into graphic design. I finally got back to what I originally wanted to do.”

Before forming their LLC, Dianne and Don would take their work home, literally. “We would buy a home, live there, fix it up, sell it and then go to the next one.” 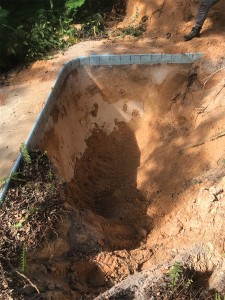 From a hole in the ground to Don Moore in the pool. (DOUG POWELSON) 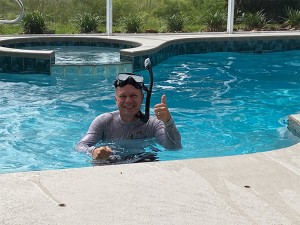 Cliffhanger: What about the pool?

Dianne and Don cleared the garden from the pool, where they discovered that there was no damage to the structure. The result was a house with the best backyard in the neighborhood, along with a higher profit for Main Street Group.

“One of my favorite things about this process is the neighbors,” says Dianne. “At every home we’ve renovated, we’ve always built relationships with the neighbors. They get excited about what’s going on because, more often than not, it’s usually the worst house on the block. We make it beautiful, so they’re always happy to see us.”

Main Street Group has settled into a winning routine. “We have different houses in different stages. Today we’re selling one, getting one ready to list, and we just bought one last week.”

Dianne and Don not only renovate homes, but they are also real estate agents and offer consulting services.

“When people see our designs or come to our open houses, they love them. They’ll say, ‘Wow! I want my house to look like that.’ I renovate homes, consult about renovating, or even advise people before they list their house, giving them a quick makeover to get top dollar.”
And what is Dianne’s favorite part of the process? “I love the creativity. I think uncovering the original beauty of the house, and then the day the buyer falls in love with what I’ve done, that makes all the work worth it.”

This article appears in the July 2022 issue of Orlando Magazine.
Categories: Home Page Features, Real Estate
Tags: Flipper, Flipping Out in Florida, Real Estate, Realtors
Want to read the whole issue? Download and read this issue and others on Magzter.