Before there was Powerball, Mega Millions or Fantasy Five, there was just the plain vanilla Florida Lotto, launched in early 1988. On Labor Day weekend of that year, Sheelah Ryan of Winter Springs matched all six numbers drawn and hit the game’s jackpot of $55.1 million—the largest individual lottery win in America up to that time. Ryan, who had bought her ticket from an Albertson’s in Longwood, soon began giving her millions away.

Within a few months the foundation she set up had given $100,000 to Seminole County charities alone. Six years later, in December 1994, Ryan was one of 10 Central Floridians we profiled who embodied the selfless spirit of the holiday season by giving year-round to those in need. Sadly, our article on Ryan was also a farewell: She had died of cancer at age 69 three months before the issue printed.
Ryan was instrumental in helping to build Seminole’s first domestic violence shelter. She also loved rewarding youth for their good deeds (one boy received a $500 check for turning in a $100,000 cashier’s check somebody had lost). And when a local teacher couldn’t get insurance coverage for an experimental cancer treatment, Ryan gave her $5,000. Ryan’s foundation continues the good works today, especially when it comes to women’s and children’s causes.

“She was the most amazing person I’ve ever met,’’ Michael Griffin, who as an Orlando Sentinel reporter broke the story on the win—told us is 1994. “She’s unassuming and unpretentious. I interviewed her a year later and she was the same Sheelah. She didn’t dress differently, and she drove the same car. If we could create the perfect person to win the lottery, she’d be that person.’’ 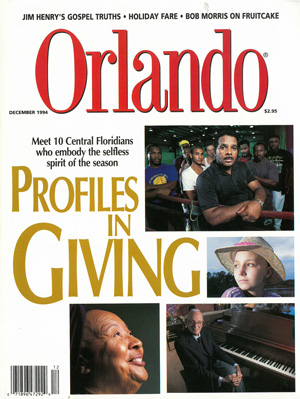 Others who appeared on Profiles in Giving list included:
John Tiedtke, one of the area’s premier arts philanthropists.
Dr. Richard Baxley, who started a full-service health care clinic that operated out of a homeless shelter (Dr. Baxley is on our Best Doctors and Top Doctors list each year, including in this issue).
Breanne Anderson, a 15-year-old who courageously fought her own cancer battle while volunteering 20 hours a week as an elementary school aide. We did a follow-up story on Breanne last March. She’s now a social worker at Orlando Regional Medical Center.

From the Dining Guide 22 years ago…