Finest Doctors 2018: The Details on Diabetes

Here’s a primer on the disease, its effects, the struggle to live with it, and the efforts to treat it.

For over four decades, Lee Alexander has struggled with Type 1 diabetes, an autoimmune disease in which the body mistakenly turns on itself, decimating insulin-producing cells in the pancreas.

Unable to make this vital hormone on her own, the Orlando resident depends on synthetic insulin to survive. Without daily doses, her blood sugars, or glucose, can dip too low or spiral too high. Changes in either direction carry imminent threats, some life-threatening, experts say, while sky-high sugars over time can lead to heart or kidney disease, blindness and even limb amputation.

So, 50-year-old Alexander monitors her glucose levels at least five or six times a day, just as she has since age 7, when doctors first diagnosed her. Taught back then to watch for color changes in urine, “I knew which colors to shoot for,” she says with a laugh. A blue paper meant blood sugars were too low; blood-orange colors meant they had jumped too high; but “greens were always good,” keeping pace with her growth and energy needs as a child.

Today, Alexander uses an insulin pump that “talks” to her glucose monitor to regulate blood sugars, a clear technologic advance over “peeing into a cup.”

Also, she remembers, as if it were yesterday, the “torturous devices made of heavy metal” that once delivered insulin to her body. The needles penetrated so deeply beneath her skin, they often left behind painful bruises, she says. “Now they’re so small you can barely feel them. The technology has changed so much. It’s so much better.”

But Type 1 diabetes remains incurable, despite the distant promise of stem cell therapy to restore healthy insulin function someday. Researchers have not yet figured out how to get these implanted early cells “to stop growing, so you don’t get pancreatic cancer,” says Dr. Benjamin Kaplan, an internal medicine specialist at Orlando Health. Until they do, “the treatment of choice is still insulin, insulin or insulin.”

The treatment scenario differs for those diagnosed with Type 2 diabetes, however—a far more prevalent form of the disease, closely linked to obesity and physical inactivity.

In Type 2 diabetes, the pancreas still pumps out insulin, but “there’s too much sugar on board,” Kaplan says, because the pancreas makes too little of the hormone, or its use becomes impaired by fatty tissues or some other mechanism. So, doctors prescribe any one of several oral medicines now available to rid the body of excess glucose, he says. If the disease is rapidly progressing, they add insulin as well.

Although Metformin is generally viewed as the “go-to-drug,” or the one first used to stabilize blood sugars, Kaplan says, “the truth is that the true treatment for diabetes is diet and exercise.” 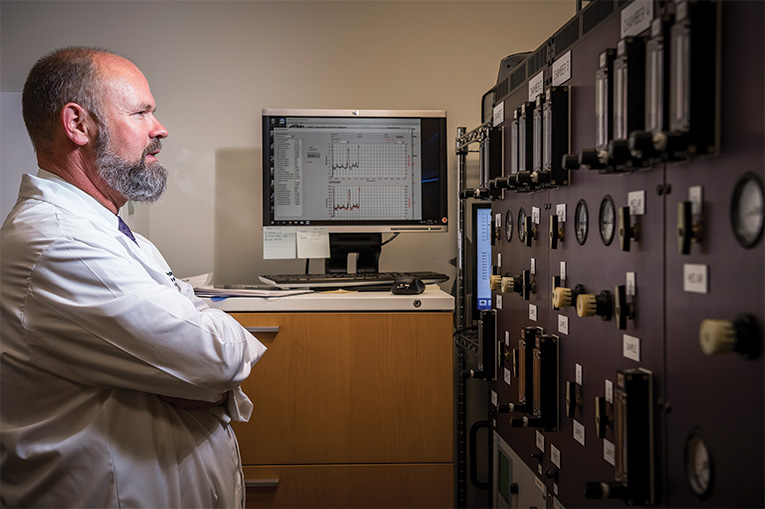 Dr. Richard Pratley oversees clinical trials at Florida Hospital's Diabetes Institute. ABove are some of the meals carefully measured for study participants.

Some 30.3 million Americans of all ages, or nearly 10 percent of the U.S population, now live with diabetes, according to the Centers for Disease Control and Prevention. The vast majority, 90 to 95 percent, have Type 2 disease, the rest Type 1 or gestational diabetes, which can occur during pregnancy. If current lifestyle trends persist, the federal agency predicts, the numbers could double or triple by 2050.

In recent years, the nomenclature for these metabolic disorders has changed from juvenile-onset or adult-onset diabetes to Type 1 or Type 2 diabetes, respectively, to reflect this far more pervasive reach. Both children and adults may develop either of these distinct forms of the disease, experts say, although Type 1 diabetes predominantly occurs in children during their peak growth years when insulin demands are highest.

In comparison, Type 2 diabetes mostly strikes after age 40 in overweight or obese adults, many with family histories of the disease. Increasingly, though, as CDC data show, a tripling of obesity in children and teens since the 1970s has rendered them more vulnerable to Type 2 diabetes as well as other health concerns ordinarily seen in adults, such as heart disease and stroke.

“I do feel as if I’m seeing more children younger and younger with Type 2 diabetes,” says Dr. Penelope Pauley, a pediatric endocrinologist and certified diabetes educator at Arnold Palmer Hospital for Children, who recently treated an 11-year-old boy with the disorder.

“It’s scary and disheartening,” she says of the trend. “Culture has a lot to do with it. These kids don’t move; they don’t eat fruits or vegetables. By the time we see them, their blood sugars are so high we have to put them on medication.”

Once glucose levels can be brought under control though, Pauley and others say, many children and adults can benefit from lifestyle changes. Those include limiting carbohydrates in their diet or exercising more to prevent blood sugars from “just sitting around” and doing damage to arteries and other organs. 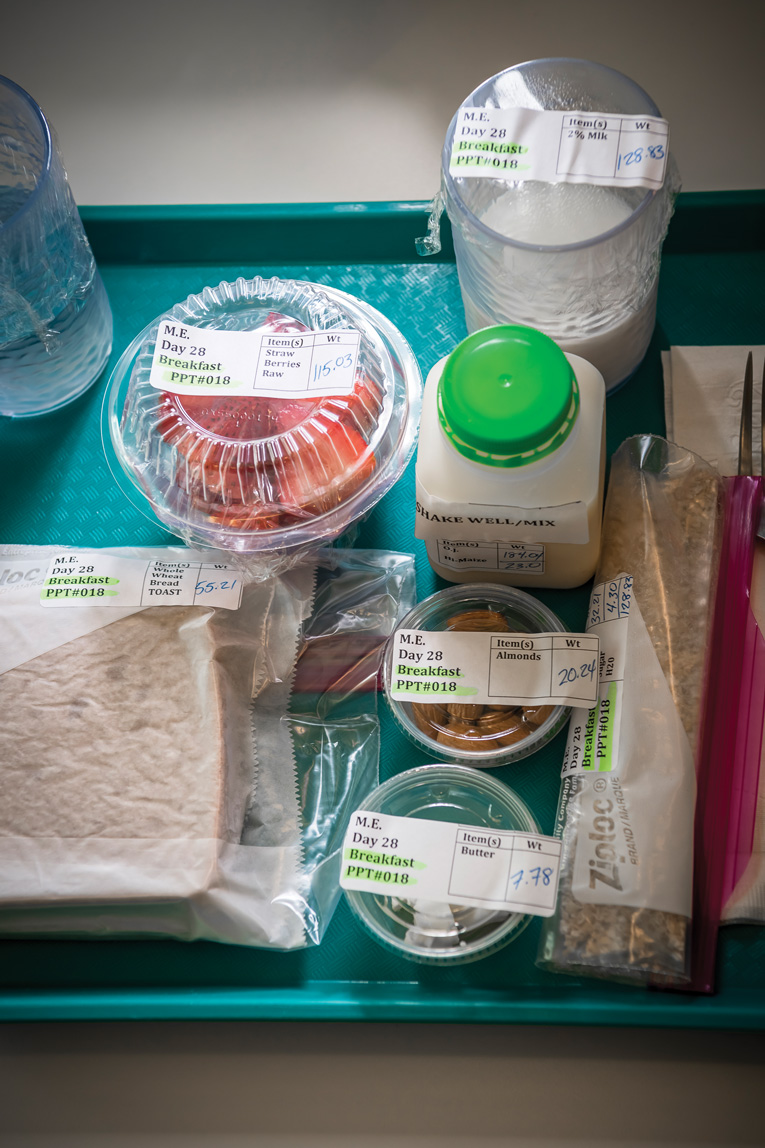 Some of the meals carefully measured for study participants.

Over time, however, a high percentage of Type 2 diabetics eventually require insulin, along with oral medicines, to keep blood sugars within a healthy range, according to Dr. Richard Pratley, medical director of Florida Hospital’s Diabetes Institute. But newer drugs hold the potential to delay insulin needs, he says, slowing disease progression far longer than in the past.

Researchers at the University of Texas, San Antonio, for example, have been testing an aggressive strategy using a combination of three drugs to treat newly diagnosed patients over the past six years. “One very interesting result of this study,” Pratley says, “is it delays atherosclerosis,” or hardening of the arteries,  a known risk factor for heart disease in diabetic patients and others.

Another strategy, which has a decade of research behind it, Pratley says, has not been widely practiced by doctors yet. The idea: to normalize blood sugars, then take patients off medications for a while. “It’s effective in a good fraction of patients,” especially diabetics who are only two to three years out from diagnosis, he says. “Our twist [at Florida Hospital] is to pair it with lifestyle interventions.”

Despite many large genetic studies, genes alone fail to explain Type 2 diabetes, considered a multi-factorial disease. Many genes contribute to an individual’s susceptibility, but none stand out as “drivers” behind its development, Pratley says, adding, “There’s no Type 2 diabetes gene per se.”

Nor do available drugs work with the same precision as cancer drugs, he says, calling targeted therapies an ‘aspirational goal’” for the future.

Similarly, studies in identical twins with Type 1 diabetes have found that genes explain only part of the picture. Along with an inherited predisposition, something else is at play, possibly an environmental trigger, according to the American Diabetes Association. Other possible triggers include seasonal variations in disease onset, viral culprits or even early dietary factors.

In Alexander’s case, none of her family has ever had the disease, though several close relatives were prone to coronary artery disease and heart problems, she says. At age 31, she had a heart attack; by age 33, she needed double coronary bypass surgery.

Not surprisingly, she indulges in an occasional “pity party,” she admits, as dealing with the disease and misperceptions about it for so long have been both frustrating and stressful. “People would say to me, ‘If you hadn’t eaten so much sugar, maybe you wouldn’t have gotten the disease.’ ”

There’s also constant uncertainty not only about her blood sugar levels, which vary from day to day, even hour to hour, Alexander says, but also around health care issues and whether insurers will continue to cover pre-existing conditions. Her current insurance policy is fine, she says, but she fears losing it and not being able to afford the medical costs going forward.

And then, there are the wistful desires.

“Every now and then I just want to eat a big bowl of pasta and not worry about it,” she says. “It’s tough.”

But violating dietary restrictions carries big risks, as she knows, with blood sugars rising or falling to dangerous levels. When that happens, she says, “what you feel is horrible—leaving you always at the mercy of insulin.”

Still, she just keeps “plowing through,” Alexander says. “Even as a child, my attitude has always been ‘just tell me what I need to do.’ ” 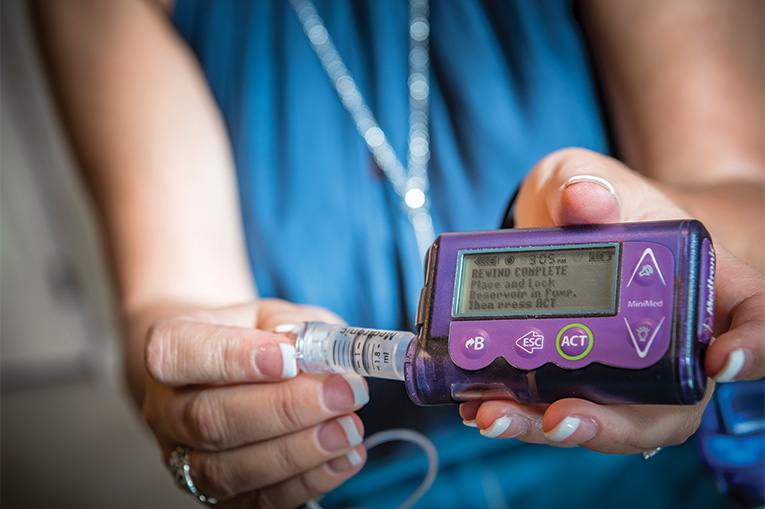 The technology that helps Lee Alexander daily: insulin loaded into a pump and a monitor that reads glucose levels.

Doctors widely consider 100 milligrams per deciliter (mg/dL) a normal blood sugar after fasting, or not eating for at least eight hours. Pre-diabetic fasting levels range between 100 mg/dL and 126 mg/dL, while above 126 mg/dL is considered diabetic.

However, to confirm a diabetes diagnosis, many doctors rely on the A1c metric system when fasting sugars run too high. The A1c test measures average blood glucose levels over a two- to three-month period.

An advantage of being diagnosed this way is “that you don’t have to fast or drink anything beforehand,” according to the American Diabetes Association. The percentage of glucose in the hemoglobin molecule, the protein inside red blood cells that carries oxygen to the body, determines risk, says Dr. Benjamin Kaplan, an internal medicine specialist at Orlando Health. “Anything above 6.5 percent is diabetic,” he says.

Insulin needs can fluctuate. And the financial hit can be painful.
By Susan Jenks 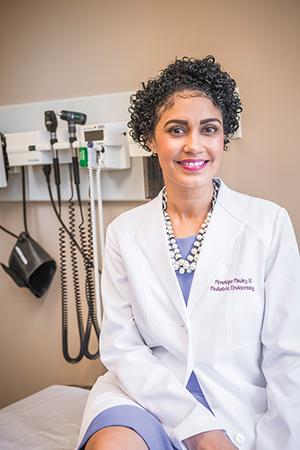 In children, who develop Type 1 diabetes, sugar levels require constant testing and adjusting—a kind of metabolic dance between what’s too high and what’s too low to meet their energy needs and, ultimately, survive.

“The problem with diabetes is your blood sugars are always fluctuating, always a dynamic number,” says Dr. Penelope Pauley, a pediatric endocrinologist and a certified diabetes educator at Arnold Palmer Hospital for Children. “Blood sugars change with what you eat, whether you’re nervous or how active you are—all things that can affect insulin,” she says, referring to the pancreatic hormone in the body that regulates glucose production.

Typically if weight is stable, most children need one-half to one unit of insulin per kilo, or 2.2 pounds, a day, Pauley says. “But if you’re growing faster, you may need much more than that,” she says. And the costs can be high.

A box of insulin, containing about 1,500 units of this biologic compound, for example, costs about $600, she says. But, how long a supply lasts depends not only on weight but also size and individual energy needs. “If you have a big kid, 16 or 17 years old on the soccer team who’s super hungry all the time,” Pauley says, “he can go through insulin very quickly—maybe two boxes, or $1,200 worth of insulin, every month.”

So, price increases carry a significant impact on patients. Even in Type 2 diabetes, where insulin needs vary widely, given the spectrum of disease severity, it’s a growing concern, says Dr. Richard Pratley, medical director of Florida Hospital’s Diabetes Institute. Over the past 15 years or so, he says, aggressive marketing by three main pharmaceutical companies has continued to drive prices up, as newer engineered versions have kept generic competitors at bay until recently.

The branded versions are more desirable, “more patient-friendly” than older insulin drugs, he says. But some patients have no choice but to switch from “preferable to adequate” to control blood sugars, given the rise in insulin prices and recent increases in insurance deductibles, he says. Also some insurers no longer cover certain prescription brands in favor of cheaper drugs.

“It’s a huge issue,” Pratley says. “And it’s one reason why we try hard to keep people from progressing to where they need insulin for as long as possible.