Robotic surgeries are in the spotlight for treatment of early prostate cancers and many gynecologic conditions.

But not only have several research studies shown little correlation between the two, one of the most prolific practitioners of the technology in the Orlando area admits he’s “lousy at video games, but very good at robotic surgery.”

Robotic systems bear little resemblance to the cinematic robots of Disney’s Wall-E or Isaac Asimov’s I. Robot—at least, so far. Instead, surgeons use machines with four robotic arms they control from a console in the operating room to fit miniaturized instruments inside the body. Three of the arms carry the instruments they need, while a fourth holds a 3-D camera that provides uncanny images of once-inaccessible areas of the human anatomy.

According to Intuitive Surgical, the Sunnyvale, California, manufacturer of the da Vinci system, a dominant player in the marketplace, more than 700,000 robotic surgeries were performed worldwide last year. These minimally invasive procedures have replaced in many cases the older, laparoscopic “keyhole" surgeries—improving visualization, offering better hand-eye coordination and making technically difficult or undoable operations in the past now feasible.

“When the robot first came on the scene, it was a tool looking for an application,” says Roger Smith, PhD, chief technology officer of the Nicholson Center at Florida Hospital in Celebration. Its earliest uses, he says, were in the prostate gland where “it really took off” about five or six years ago, and then migrated into gynecologic procedures, where a high percentage are done this way today.

While Florida Hospital, for example, does not perform robotic-assisted procedures in the heart, a spokesman says, at Orlando Health, interventional cardiologists only began using the CorPath system in the catherization examination room (but not the operating room)—last year. The CorPath system, made by Corindus, a vascular robotics company in Waltham, Massachusetts, is designed specifically to improve the accuracy and precision of angioplasty to open clogged arteries and restore blood flow to the heart.

Other companies are developing robotic systems for the spine, knees and hips, and even for hair transplants, says Smith, though just how many companies are working on the technology is tricky to assess. And in children, the robotic systems currently available have instruments considered too large for their bodies, especially those of newborn babies.

“So far, we’ve been unable to demonstrate robotic surgery is superior, better or even equivalent to conventional laparoscopic surgery” in children, says Dr. Andre Hebra, chief medical officer at Nemours Children’s Hospital in Orlando. Hebra describes himself as biased toward the technology and before moving to Orlando in 2016, in fact, created a robotics program at the Medical University of South Carolina in Charleston, primarily for adults.

But, at Nemours, he says, the hospital reserves robotic surgery for complicated conditions in children, such as Hirschsprung disease, an inborn error in the large intestine, while still performing hundreds of cases laparoscopically each year. Whether or not to purchase a robotic system for the Orlando campus, he says, will depend on the technology’s further development and whether one emerges with smaller instruments.

“Then, we may revisit the discussions about how best to use hospital resources,” Hebra says, adding that, given the $1.5 million price tag or more for a single robot, “it’s difficult to justify the cost.”

In the meantime, in adults, robotic surgeries have moved closer to the “gold standard,” or the preferred method of surgery, in at least two medical areas: the treatment of early prostate cancers, as well as many gynecologic conditions.

Some 85 to 90 percent of prostate cancer surgeries are performed robotically today, according to Dr. Vipul Patel, medical director of the Global Robotics Institute at Florida Hospital in Celebration. A pioneer in his field, Patel recently reached a significant milestone, performing over 10,500 robotic-assisted procedures in the prostate (see accompanying story) since 2012. 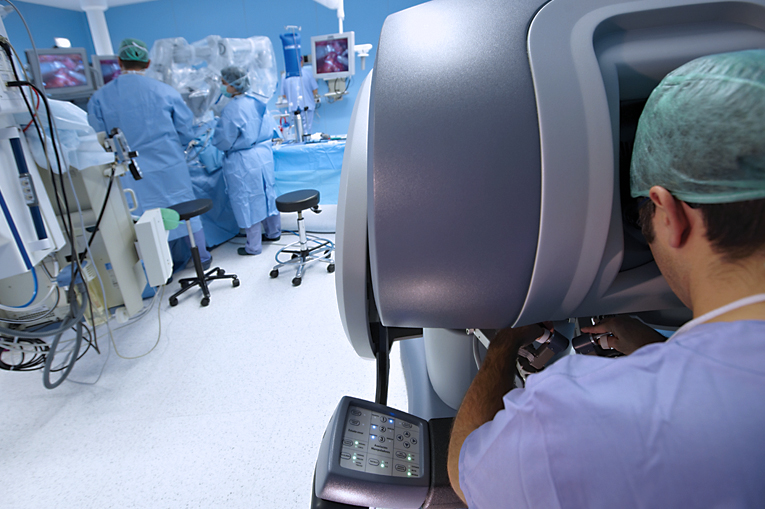 A doctor seated at a console guides a da Vinci robot being used on the operating table in the background. GETTY IMAGES

“There are two straightforward requirements for robotics in the prostate,” Patel says. “The cancer has to be localized to the prostate, and the patient has to be healthy enough to live another 10 years.”

In gynecology, robotic surgeries also account for a high percentage of procedures, though the exact percentages are unclear. But at the same time, surgeons still do a fair amount of laparoscopic procedures as well, says Dr. Veronica Schimp, chief of gynecologic oncology at Orlando Health, UF Health Cancer Center. In fact, she defines the term “gold standard” more liberally to include both minimally invasive procedures. The two systems share comparable complication rates, Schimp says, even though the robot yields better visualization, the operative time can be somewhat better and for certain operations, such as a hysterectomy, the recovery time is “way better."

Still, much depends on the competence and comfort level of the surgeon and “if a surgeon prefers a laparoscopic approach, then they should do it,” she says.

Others agree. Surgeon preference, not patient choice, dictates which procedure a patient ultimately gets, says Dr. Muhammad Jawad, medical director of Orlando Health’s Bariatric and Laparoscopy Center. His own preference for weight-loss surgeries: the robotic system. “Absolutely,” he says.

Not only does the robotic system provide a clearer view of the operating site, he says, it relieves surgeon fatigue, a major issue in laparoscopic surgery due to the torque or twisting power often needed to burrow through fat layers.

Jawad estimates that roughly 10 to 15 percent of surgeons across the country use robotics in bariatric surgeries today, but more might embrace the technology, he feels, if insurers, including Medicare, loosened recent restrictions. The new rules require proof that patients undergo six months of dieting before coverage kicks in, along with certain weight goals. And, if patients fail to meet these yardsticks, the six-month requirement begins anew.

“These are people who have been dieting all their lives,” Jawad says, “and now insurers want them to diet again before they’ll approve a surgery that might help them.”

Where robotics help, he says, is in removing large lung tumors, even when the cancer has spread to the lymph nodes. And, compared with open surgery, hospital stays after a robotic procedure are shorter, two or three days compared to four or five, while the risk of pneumonia drops dramatically from 15 percent to around 3 percent, Herrera says. 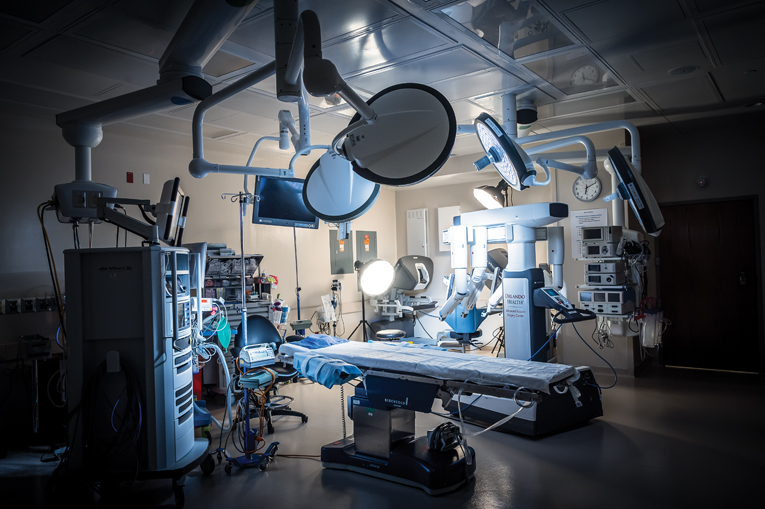 A robotic surgery setup at Orlando Health. Robotics are used in a wide range of areas, including gynecological procedures and bariatric weight loss surgery. ROBERTO GONZALEZ

The data does not yet support robotics as better than open surgery, however, he says, and no head-to-head comparisons have been done in clinical studies. “But if the robot continues to allow us to convert from open surgery to less invasive procedures, it’s a welcome technology.”

Unlike his colleagues, Herrera describes himself as a good video-gamer, a skill he thinks does improve his eye-hand coordination. He predicts the next generation of surgeons, raised on these fast-paced games, may emerge as even better robotic surgeons, despite the few studies suggesting otherwise.

And he also sees a time, perhaps within a decade, when a true “Doctor Robot” will enter the operating room, as the technology continues to evolve.

“Robots are already learning how to see and interpret under our control,” he says, adding, “This is a very reliable system.”

Florida Hospital’s Smith shares a similar vision. “Someday there definitely will be robot surgeons,” Smith says. “Other robots make your cell phones, put together your automobile and make most of your electronics, so the technology exists.”

But he adds a caveat. “When you start bringing robots into medicine, it becomes really personal and there’s a trust issue [between patient and machine] that needs to be bridged,” he says. “Robots can do some basic things, but I think they will continue to work alongside humans.”

In February of this year, Florida Hospital’s Dr. Vipul Patel crossed the 10,000 mark in the number of robotic-assisted prostate cancer surgeries he’s performed since 2012. He’s now at 10,500 procedures, he says, a milestone he’s clearly proud of and one establishing him as a world leader in robotic treatments for this cancer. 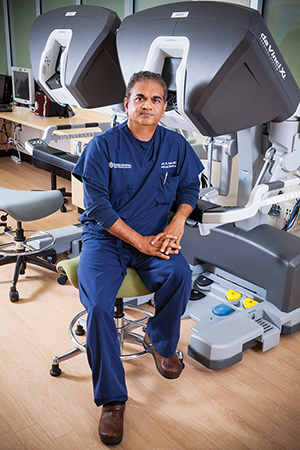 Patel’s office on the Celebration campus is full of family photos, numerous awards and gifts from grateful patients, such as a foot-high, bronze statue of Don Quixote from Mexico adorning one of his office tables. Also prominently displayed: a photo of basketball great Oscar Robertson, the “Big O,” a prostate cancer survivor who traveled to Patel for treatment shortly after diagnosis; and another photo of Patel in front of London’s Big Ben with Dr. Patrick Walsh, a pioneering figure in prostate cancer diagnosis and treatment at the Johns Hopkins School of Medicine in Baltimore.

On a recent day, staff at the nearby Nicholson Center was preparing for a training session with 600 to 900 surgeons from around the world, but not just for robotics. The ultra modern glass building, housing over 54,000 square feet of space, is the training site for all types of surgeries—open surgery, robotics and laparoscopy, a forerunner to the robotics revolution.

At the forefront of that revolution is Patel, a soft-spoken physician with an easy manner, who graduated from Baylor College of Medicine in 1995 and completed his residency and a fellowship in minimally invasive surgery at the University of Miami (FL). As director of Florida Hospital’s Global Robotics Institute today, he speaks passionately about robotics, the minimally invasive system that uses miniaturized tools to slip inside the body, as well as the difficult cancer that he treats.

Over 161,000 cases of prostate cancer will be newly diagnosed this year in the United States, while 26,730 men are expected to die of their disease, according to the American Cancer Society.

In the five years Patel has been using robotics to treat prostate cancers, he says, “Blood loss is no longer an issue,” operating time to remove a diseased gland is shorter and complication rates generally run around 5 percent. Only one patient has died, he says, and that was from a heart attack, unrelated to the surgery.

On a typical operating day, Patel does four to five of these procedures, the robotic system enabling him to navigate each patient’s anatomy from a video console inside the operating room. Most patients go home the next day without narcotics, he says, so their recovery is quicker than open surgery, usually a few weeks vs. many months.

There can be delayed bleeding “and we do have to watch for that,” Patel says, although it occurs in only one or two patients in 200. And it takes time for the bowels to go back to normal, he says, so some patients experience a lot of gas.

But the robotic technology offers significant tradeoffs in patients whose prostate cancers are detected early and localized to the gland and whose life expectancy is at least 10 years, according to Patel. In this group of men, robotics’ superior visualization with a three-dimensional camera and better instrument control can mean less impotence and sexual dysfunction afterward, he says.

Still, the surgeon’s skill, not the technology, makes the difference in any operation’s success, including robotic surgeries, Patel emphasizes. Not only should doctors providing robotics for prostate cancer be board-certified in urology, he says, they also need at least several days of training.

Because no national standards exist for how many hours or credits a surgeon must accrue before doing these procedures, however, what should consumers look for?

“They should ask how many of these surgeries a doctor has done and what are their outcomes,” Patel says.