Laura Anders Lee sits down to talk Santa with her 10-year-old. (Gulp!) 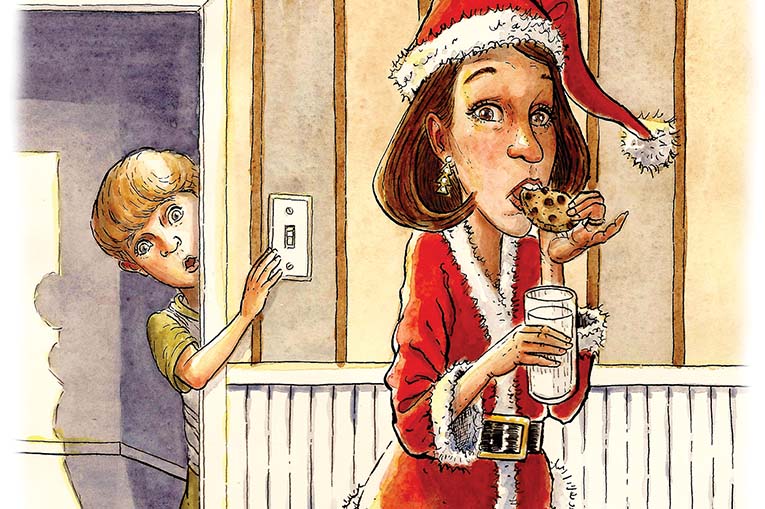 My 10-year-old and I recently had the talk. Not that talk just yet (thank goodness), but the one about Santa Claus. Ever since Easter, Anders had been hinting at the truth, but I kept putting him off. Then one night before bed, he demanded a candid conversation, and I knew it was time.

I had procrastinated for two reasons. One, I wanted to be sure he was sure. I wasn’t quite ready for him to give up that magical piece of childhood. And two, I was worried about his reaction. When I was around his age and found out about Santa, I was angry and heartbroken. I remember sitting on the front porch with my parents—away from my younger brother—calling them liars through dramatic sobs.

But it turns out that Anders is much wiser and more mature than I was back then. When I finally confirmed his suspicion, Anders thanked me—not just for telling him the truth but for being the one who gave him presents all those years. We talked for a while, then he asked one last question: Where in the world had we hidden that air hockey table three years ago?!

That night with Anders warmed my heart. I was not only touched by his gratitude, I was amazed by how graciously he accepted reality.

This year, both my boys have faced a new reality with COVID-19. Instead of birthday parties with a bouncy house, they’ve settled for having one friend over to play. Instead of going to the movies, the trampoline park or Chuck E. Cheese, they’ve stayed at home mostly without complaint. They returned to school this fall with a new set of stringent rules. They have limited time on the playground, may not interact with friends outside their classroom, and must wear masks every minute of the day except a short break outside at recess. But they’ve been much better sports about it than most adults I know. They’ve accepted our new way of life quite well.

Now it’s the holidays, and Christmas will look a little differently, too. Our parties will be small and few—and we’ll think twice about dipping our hands into the communal bowl of M&Ms. William won’t get to dress up as a toy soldier in the second grade play. Our school will not go caroling at the nursing home. Instead of crowding into the pews at church on Christmas Eve, we may opt to watch online. And Santa will most certainly not want our germy kids in his lap, even if he does wear gloves.

Missing out on our traditions won’t be easy. But as we count down (finally) to the end of 2020, instead of looking at what we’ve lost, we can look back at what we’ve gained. I’ve re-centered my day-to-day around my family and our home life. I’m more aware of social injustices. I’m more compassionate. My family is willing to do our part and make sacrifices for others who are more vulnerable.

The night Anders and I had our talk about Santa Claus, he told me how he finally figured things out. He said that if there were a Santa, then all the poor kids would get presents, too, and we wouldn’t need an angel tree or a toy drive. I was proud of him for thinking about others. And I explained to him that in a way, we all get to be Santa. And now that he’s in on the secret, he gets to be a helper, too.

Helpers take many forms. One of the longest pay-it-forward chains actually happened in Florida, at a Starbucks in St. Petersburg. For 11 hours, customers in the drive-through bought coffee for the next person in line behind them. Over the pandemic, Tyler Perry bought groceries for all the customers in a New Orleans Winn-Dixie, and in Nashville, Brad Paisley set up a free grocery store. In Orlando, Dan DeVos donated $2 million to out-of-work Amway Center employees including the staff of the Magic and Orlando Solar Bears.

It’s that kind of spirit that makes you believe Santa really can visit every house in the world in one night. Even one small act makes a difference. Whether you call it the light of God, the magic of Christmas or simply goodwill and kindness—we have the power to pass it on.

Let us all remember that in a year of so many losses, it is still more blessed to give than to receive.

This article appears in the December 2020 issue of Orlando Magazine.
Categories: Column, Home Page Features
Tags: extra-pulp, laura anders lee
Want to read the whole issue? Download and read this issue and others on Magzter.