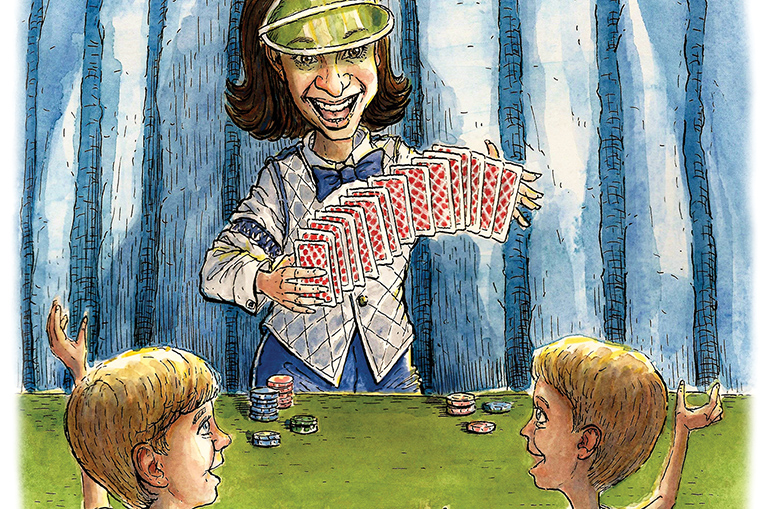 One especially hot day during our summer of quarantining, I panicked. The kids had run out of things to do. We had nowhere to go. We’d read all the library books. We’d eaten all the snacks. We were done with puzzles, Beyblades and board games. And I’d had enough of electronics.

Then I saw a bowl of change on my husband’s dresser and had an idea. I  grabbed a deck of cards and called to my 7- and 9-year-old boys, “It’s time you learned how to play poker.”

I quickly earned their respect with my shuffling skills. Actually, we started with blackjack, but when they kept hitting on 17 and busting, I shifted to five-card draw. We played for a while and when they got tired of pairs winning, I introduced them to wild cards. My oldest, Anders, wanted jokers to be wild. But my youngest, William, asked for more wild cards. So I taught them how to play Dr. Pepper, named after an old ad campaign recommending consumers drink a Dr. Pepper at 10, 2 and 4 o’clock. So in the poker game, the tens, twos and fours are wild. I dealt, and thanks to all my wild cards, ended up with a royal flush. William doubled my bet and revealed five aces. I had to Google it, but he had beaten me.

Cards were a big part of my family growing up. In first grade, I walked over to visit my elderly neighbor, Miss Willa, to play “Go Fish” while she fed me as many cookies as I wanted. While visiting my grandmother, we sat on her sunporch playing rounds of gin rummy and drinking iced tea with fresh sprigs of mint. On rainy days during PE in high school, my friends formed a small circle in the gym to play “BS,” where you take turns discarding and pretending to have certain cards even when you don’t. My family has spent many a vacation playing Spades, but more than once we quit early when things got too competitive. (Guilty as charged!)

My husband, Bryan, grew up playing cards, too. His extended family gets together every Thanksgiving. When all the dishes are cleared, they play nickel poker until his grandmother kicks everyone out. Children have always had a seat at the table as long as they played like an adult. (This means Dr. Pepper is absolutely out of the question.)

When Bryan and I got married and didn’t have much money, we bought some green felt from the fabric store, spread it over the patio table, and hosted friends for Texas hold ’em. Later, on a trip to Las Vegas, Bryan entered a low-stakes poker tournament. After only three minutes, he realized there is no such thing as low stakes in that city. He was quickly out of the game.

I fared better on a trip to Biloxi, when I won $200 on a game called “Let It Ride.” Call it beginner’s luck, because I don’t think I’ve won since—not even on a scratch-off lottery ticket or a mock casino night for a hospital fundraiser. It turns out I’m uncomfortable risking even fake money.

Cards aren’t just a way to pass the time; they reveal truths about ourselves and help us learn valuable life lessons. The author of a parenting book I once read wrote that every temper tantrum was simply “a wonderful teachable moment.” At our house, where a bad hand can quickly lead to a game of anger-infused 52-card pickup, there is no shortage of teachable moments.

Anders especially likes to win. But he needs to work on his poker face and win with humility. And William must learn to lose without tears. Losing hurts. But either ante up or walk away. Never bet more than you can afford.

Kenny Rogers, who died earlier this year, put it this way in his song “The Gambler,’’ one of my favorites:

I have a lot more to teach my boys about poker. One day, they’ll understand that in cards and in life, you get what you’re dealt. We each get a combination of good ones and stinkers. All we can do is make good decisions, hope for some luck, and play our best hand.

This article appears in the October 2020 issue of Orlando Magazine.
Categories: Column, Community
Tags: column, extra-pulp, laura anders lee, poker
Want to read the whole issue? Download and read this issue and others on Magzter.

Extra Pulp: Beneath the Surface