Laura Anders Lee recalls an innocent summer spent in Italy and coming back to a different America. 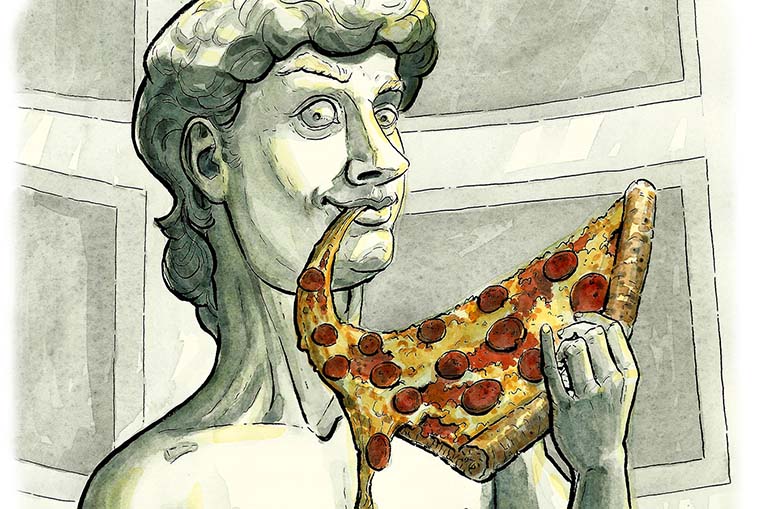 I once ate an entire pizza in one sitting, six big pieces all by myself. My girlfriends and I were in Naples, Italy—the birthplace of pizza. We had taken two trains and a bus to get there from Florence, where we were studying abroad for the summer. Other than going to class, our entire agenda included indulging in pizza, wine and gelato, and traveling by train on the weekends.

I’ve yet to have a slice of pizza that good—a crust so perfect, the sauce so fresh, the mozzarella so creamy and stretchy. But it could have very well been because of the company of my close friends from college and the adventure of it all—trekking from Tuscany to the Amalfi Coast before class began on Monday.

Living in Florence, immersed in its history and art, felt like a dream. Yet after a few weeks, The Renaissance City began to feel like home. We memorized the bus route and found the Internet cafes and laundries with the best rates.

Each day, we met our art history professor in a different piazza, museum or chapel—The Accademia for Michelangelo’s statue of David, the Uffizi for The Birth of Venus, the Santa Croce for Donatello’s Annunciation. Then, we met our creative writing professor for an hour of reflection before she sent us into the city on assignment.

After dinner with our host family, we headed back into town. In college, we met our classmates at a dive bar; in Florence, we met at “The Gates of Paradise,” 550-year-old, three-ton bronze doors on the steps of the Duomo, the city’s main cathedral.

Nobody had a cell phone in the early 2000s, so if you were late to meet, you’d get left. We mostly ventured to pubs for cheap beer but occasionally danced at a discoteca, if we could afford the cover charge.

On a student budget, we saved most of our money for weekend trips. Other than buying a train ticket, we made no specific plans. We traveled easily and freely then, even without cell phones, Google Maps, Yelp or Airbnb. As college students, we were made for living in the moment. We arrived in each location and asked locals for a place to eat or a place to stay. Eventually, we’d find a host willing to take in a handful of American students.

We hiked in Cinque Terre, where five pastel villages are stacked into the cliffs above the Mediterranean. We savored chocolate croissants in Capri while meandering down bougainvillea-draped pathways to the sea. We flirted with the gondoliers in Venice, scoring a discounted tour of the city’s serene canals. We were amazed by the juxtapositions of Rome—nuns on motorcycles, a McDonald’s beside the Pantheon, the sacred Sistine Chapel and the gruesome Colosseum.

In six weeks, we visited 12 cities in three countries. I sampled at least 40 flavors of gelato, took nine rolls of film, filled three journals, and ran up $700 on my mother’s phone card calling my boyfriend back home. Our brief time there enriched our lives forever and stretched our world wide open.

But when we returned to college that fall, everything changed. On a Tuesday morning in September, we awoke to footage of the Twin Towers falling. Gone was the lightness we felt in Italy, as we sat heavy-hearted in front of the television. Our confidence and sense of security we had all summer was replaced by fear. I was 21 years old and my life was now divided in two—before 9/11 and after.

Now, our lives will be defined by another historic event, before COVID-19 and after. The pandemic has altered the way we see the world. It has grounded us. We can no longer jump on a plane or hop on a train or a crowded bus and feel free to explore the next stop on our bucket list. The Zoom videoconferencing company is now worth more than the seven major airlines combined.

My time in Italy stands out as one of the sweetest seasons of my life—my experience there now feels more precious than ever. I was young, bright-eyed and carefree. The world was mine.

After 9/11, many of us thought we wouldn’t fly again—but we did. We tightened our security measures, and we adapted to longer lines, 3-ounce bottles and Ziploc bags. And we will travel again after COVID too.

When this is all over, the world will open up to us once more, even my beloved Italy. And when it does, I hope to be on the next plane, in search of adventure and the world’s best pizza.