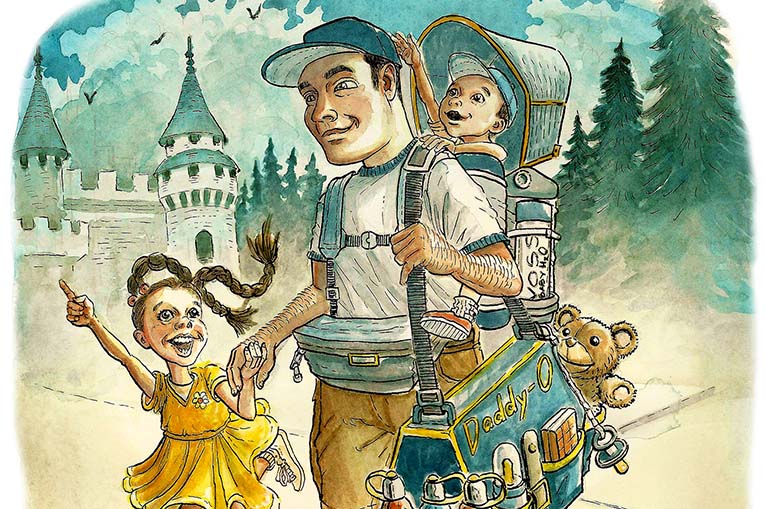 Like most families this spring, we’ve been home a lot, which means we’ve watched a lot of movies. One of our favorites is Disney’s original Mary Poppins. While my two boys are transfixed by the magic and tricks of Mary Poppins, I can’t help but notice George Banks and his utter lack of interest in his family. Other than bringing home a paycheck, he has no responsibility at home or with his children. When he walks in the door at 6:01, he expects his slippers, pipe and a glass of sherry. He completely ignores his wife and her important work as a suffragette. And only after someone else feeds and bathes Jane and Michael does he “pat them on the head and send them off to bed.”

Thank goodness I am not married to George Banks.

The role of fathers has evolved tremendously over the past century, no doubt because of the changing role of mothers. In 1900, only 6 percent of married women worked. Today, according to the Department of Labor, not only do 70 percent of mothers with children under 18 work, in 40 percent of U.S. households, they are the primary or sole earners.

To see how gender roles have evolved over the decades, just take a look around any of Orlando’s theme parks or playgrounds. Dads are carrying diaper bags, giving the baby a bottle, and changing diapers in unisex restrooms or on diaper stations installed in the men’s room. On little league soccer fields, just as many moms are coaching as dads. Women mow the grass and clean the gutters and men iron the clothes, go to the grocery store and cook family dinners—and single parents do it all. Parents today simply do what needs to be done.

Parenting is a tricky juggling act, and no one can drop the ball. We were especially put to the test this spring with mandated stay-at-home orders. With no school and limited child care options, parents had to maneuver working, homeschooling and safely being the gofer for groceries and other household needs. Fathers or grandparents pushed strollers or rode bikes around the neighborhood while mothers had a quiet house for a deadline or a virtual meeting—and vice versa.

My oldest son, Anders, just turned 10, and William will be eight in September. I can’t imagine raising children in any other era. It’s hard to believe fathers were not allowed in the delivery room until the 1970s. My labor with Anders was a difficult 20 hours, an emotional and physical roller coaster, and Bryan never left my side. Once at home, Bryan helped with late-night feedings, changed diapers and cleaned up messes and boo-boos. Two years later, we went through it all again. By sharing those intimate moments and hard work, we grew closer together as a couple and a family. Our bonds were sealed.

Throughout our marriage, our careers have changed many times—I’ve worked full-time, part-time and at times not at all. Bryan’s career is rather demanding, so for the most part, I’ve been the one to take the boys to school, help them with homework, bring them to doctor’s appointments or toss the football in the backyard. So when he can, Bryan cooks us breakfast, coaches the boys’ soccer and football teams, plays “Madden” with Anders and takes William along to the golf course. And when I really need a break from the kids, he gladly stays home while I enjoy a girls night out or an out-of-town girlfriend getaway—a luxury my grandmothers certainly didn’t have.

Like most parents, we strive to find a balance that works best for us, though we’re always fine-tuning with every new activity, job change or unexpected challenge. I’m glad Anders and William see their dad unloading the dishwasher and folding clothes, just as I’m glad they see me working on my laptop and depositing checks into my own business account. I’m grateful for the women—and men—who paved the way for better equality in the workplace and at home.

At the end of Mary Poppins, we realize that it was George Banks who actually needed saving, not Jane and Michael. In the last scene, a disheveled George has lost his job, but he realizes that’s not what matters most. With Mary Poppins’ help, he finally figures out that spending more time with his family not only enriches his children’s lives, but his own. He stays up all night mending his children’s kite, and in the morning he skips off with his family to the park. There, standing together, nobody—especially George—has ever been happier.

Editor Letter: Burgers, Goblins, and the 50 Most Powerful