Extra Pulp: Down the Rabbit Hole

Our columnist is a true believer in childhood magical thinking. 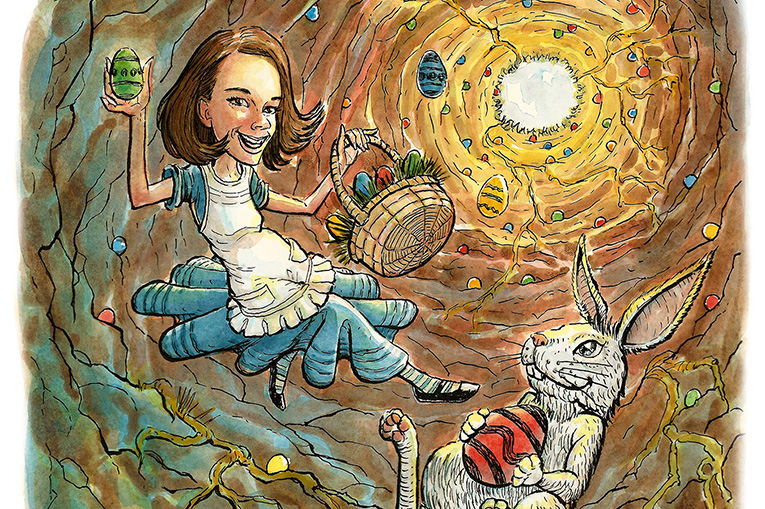 My brother Will and I didn’t just have Santa, the Easter Bunny and the Tooth Fairy—we also believed in the Lollipop Fairy. She visited us once or twice every summer vacation. On our morning walk to the bay, something would catch our eye. Along the dirt road just beyond the shoulder of pine needles, red, yellow, orange and purple lollipops had magically grown overnight! We scurried through the palmettos to pluck them out of the ground, folding up the bottom of our T-shirts to carry them back to the house.

“The Lollipop Fairy came!’’ we squealed to our parents. Because we had to share, we dumped them all out on the wooden floor and took turns selecting one at a time, the yellows always the last to go.

This went on every summer until one day I looked in the top of the pantry and pulled down a mysterious black bag. It turned out to be my Pandora’s box—inside were lots of lollipops. My heart sank. There was no fairy! It was only my parents who stuck them into the ground.

My oldest son, Anders, is almost 10, and I fear this may be his last holiday as a believer in the Easter Bunny. Over Christmas, he expressed some doubts about the man in red, and he’s noticed inconsistencies in the Tooth Fairy’s prices—why did Eli get $20 and I got $3? Now it’s Easter, and his questions continue. Is it a giant bunny or a regular-sized bunny? How does it lay eggs when it’s a mammal? Why do people think the Easter Bunny is a he?

His questions are difficult because there are no clear answers. Of all the magical creatures, the Easter Bunny seems to me the most ridiculous.

Wanting to get my story straight, I did some research. According to Time magazine, eggs have been a symbol of Easter for more than 600 years. Decorating eggs began centuries ago, and Christians once abstained from eggs during Lent, waiting until Easter to enjoy them again. Legend has it that in the 1500s, a mother in Germany hid colorful eggs in her garden on Easter, and just as her children discovered them, they saw a hare hopping away. The custom spread, and every Easter eve, children prepared a nest for Osterhase to leave eggs. In the 1700s, when Germans immigrated to America, they brought their Easter Bunny tradition with them.

But through time, the darling backyard Peter Cottontail variety has been replaced by adults in bad bunny suits. Instead of a sweet cuddly bunny, a mute, larger-than-life rabbit peers down at children with hollow eyes.

Just as some people have a fear of clowns, my sister-in-law Robin is still creeped out by the Easter Bunny. As a child, she was forced into the Easter Bunny’s lap and was sobbing when—flash!—a photographer captured her terror for the newspaper. After that, she locked her bedroom every Easter eve. Now as a mother, she protects her children from the scary mall bunny, although she does hide eggs.

Anders and his brother, William, have never been frightened by the Easter Bunny, but during one Sunday brunch, they were quick to notice a sliver of human skin between the bunny head and the bunny suit. I thought our whole game of make-believe was over right then, but to my relief, they declared that mall and restaurant Santas and bunnies were fake since the real ones obviously wouldn’t have the time to visit such places.

But I really do believe in magic, and I have loved sharing its wondrous joy with my sons. I suppose this is exactly what the German parents wanted to do, too—keep the magic going from one generation and one continent to another.

When I was a child, magic transformed a patch of scrub near the beach into an enchanted forest of brilliant lollipops. Magic turns the angst of getting a tooth pulled into the surprise of a crisp dollar bill. Magic exists in the pure excitement a child feels on Christmas and Easter mornings when they discover presents by the fireplace and a basket filled with goodies. I wouldn’t trade that feeling for the world.

I mourn the imminent, inevitable day when Anders finds out, because a little of his childhood innocence will die. But a little sparkle of magic will stay with him, as brightly impressed on his mind as Easter eggs. Long after his childhood, those magical mornings will live on in his memory, which is the true gift from Santa, the Easter Bunny, the Tooth Fairy and our dear Lollipop Fairy.